The socialist Left party has adopted its policy platform for Germany's September general election. Internationally, it is calling for NATO to be replaced and an end to troop deployments. 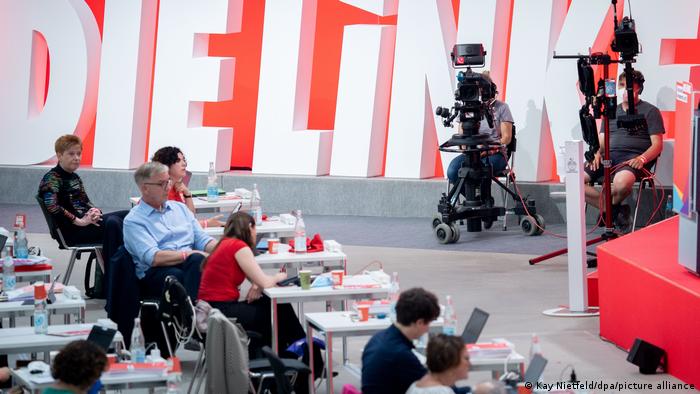 Among its manifesto commitments, the party advocates an end to all arms exports

Germany's Left party (Die Linke) on Sunday adopted a national platform with a focus on social care that also calls for the NATO alliance to be scrapped.

Although the party has no realistic chance of forming a government, it could have a say in policy as part of a future coalition.

What is the Left party promising?

Foreign policy: An end to all foreign deployments of the Germany's military, the Bundeswehr. The party wants to replace NATO with a collective security system involving Russia. In addition, the party advocates an end to all arms exports.

Climate change: An energy revamp with a focus on renewable energy. The party also wants to phase out coal by 2030 at the latest and to see Germany climate-neutral by 2035.

Transport: The manifesto would commit to a goal of local public transport free of charge, and for rail travel to also become cheaper. There would also be a ban on domestic flights of less than 500 kilometers (310 miles).

Immigration: The party advocates residence and work permits regardless of employment duration and for the qualifications of non-EU citizens to be recognized. It rejects the notion of deportation, especially where war and persecution are a reality.

Social care: The party wants 200,000 more nursing staff in hospitals and nursing homes, and an increase in basic pay for employees. It also wants a statutory staffing level, and for hospital and care groups to be transferred to public ownership.

Labor: A minimum wage of €13 (currently €9.50). Temporary employment and fixed-term contracts without a fixed term would be abolished. The party also proposes a four-day week of around 30 hours as a normal work model.

Pensions: The Left party wants to introduce a minimum pension of €1,200. Instead of retirement at 67, employees should again be able to retire at 65 at the latest without deductions.

Janine Wissler and Dietmar Bartsch, who are the co-leader of the party and the co-leader of its parliamentary faction respectively, are to be the party's flagbearers in the lead up to the September 26 election.