Germany′s empty refugee shelters: Sensible backup, or waste of money? | Germany | News and in-depth reporting from Berlin and beyond | DW | 22.12.2017

Two years ago, German communities were forced to open refugee shelters at breakneck speed to accommodate the new arrivals. Many remain vacant, especially in rural areas. But spiraling upkeep costs are cause for alarm. Fewer refugees are arriving in Germany. Some 90,000 asylum-seekers came to the country in the first six months of 2017. German authorities expect a similar number for the second half of this year. That means that the number of new arrivals has dropped significantly compared to previous years. This does not, however, lighten the financial burden on local municipalities, which are still paying for the upkeep of refugee shelters — even though many remain vacant. In many cases, long-term property leases were agreed.

A recent survey conducted by German public broadcaster WDR revealed that one-third of all refugee shelters in the country's most populous state of North Rhine-Westphalia remain vacant. Yet costs to cover the leases, to pay for security services, electricity, heating and repairs keep accumulating. WDR estimates that this costs Mönchengladbach, a city of 250,000 inhabitants, almost €10 million ($12 million) per year. At the height of the refugee crisis, in the second of half of 2015, the city swiftly opened emergency accommodations with a total capacity of up to 2,300 refugees. Now, just 750 asylum-seekers are accommodated in Mönchengladbach. Two-thirds of available shelters remain unused. While vacancy rates appear to be lower in Berlin, Hamburg and Bremen, Germany's larger states are reporting an increase. However, no official figures exist on refugee shelter utilization rates, making it difficult to talk about general trends.

Representatives of German city and regional authorities are alarmed. Each city in North Rhine-Westphalia is allocated a sum of €10,400 per year for every refugee housed. When fewer refugees arrive, fewer funds are allocated — even though they are badly needed. Andreas Wohland, from North Rhine-Westphalia's Town and Municipality Council, thus argues that the situation should be reassessed and that German city and regional governments should receive more financial support. "We want to see per capita funding raised," he said. 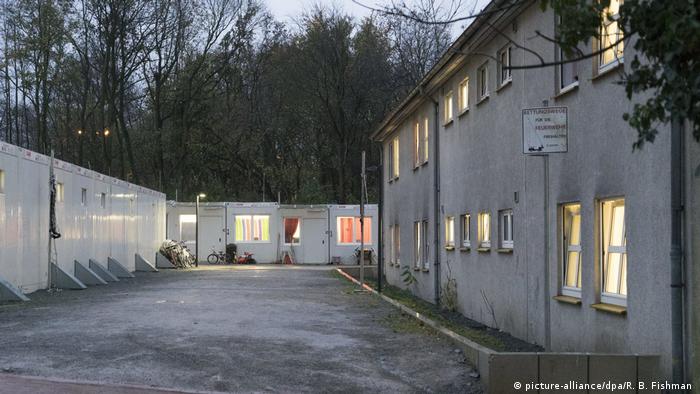 Many refugee housing units sit empty, like at this facility in Bochum

Mounting costs for empty shelters are particularly problematic for cities already facing financial difficulties. Bochum is a case in point. In the city's Harpen-Rosenberg district, the grounds of a former swimming pool were converted to house refugees, at a cost of €11.1 million — paid for by the local government. Since its completion in October 2016, only three modular temporary shelters have been in use while the other two remain vacant, as local media report. The accommodation can house a total of 450 refugees but only 170 actually live there. Now, a lively debate has ensued over how to proceed. Though caution is advised, as nobody can predict how many asylum-seekers will arrive in future.

Even though the number of new arrivals is dropping, German city and regional authorities face significant challenges. In Dusseldorf, temporary shelters are now being converted into permanent housing. This is because the city will have to ensure that 5,000 refugees, who have been granted the right to stay in Germany and cannot afford regular accommodation, will have a home in 2018. Initially, authorities had estimated a demand for merely 3,000 individuals. This has proven to be an underestimation because German asylum law stipulates that such individuals may not freely chose where to live. They cannot, in other words, move to more affordable rural areas. German authorities are now referring to these individuals are "quasi homeless refugees."

A factory that never became a shelter

It's a challenge that many German cities are familiar with. Like Berlin, for instance. In the country's capital, the number of housed refugees remains high. Berlin's governing body claims there are no vacant accommodations. The city's department for social affairs and health says that 25,700 refugees presently live in Berlin. They are variously housed in shared accommodations (19,186), preliminary reception centers (2,096) and emergency shelters (3,990). Buildings, should they become vacant, don't remain so for long: In Berlin, a former military barracks which housed up to 1,400 refugees had to be converted into a headquarters for the tactical unit of Germany's federal police. The refugees were forced to move out. And this is no exception, according to a representative of the city's department for social affairs and health. The case of a former Tetra Pak factory in northern Berlin is a particularly controversial one. The city had leased the property in order to be able to house up to 1,100 refugees should the necessity arise. For two years now, the city has been paying €160,000 euros per month for the 35,000 square meter property — albeit without a single refugee ever having lived there. It soon transpired that the property's plumbing was in bad condition and that making the complex "livable" would involve too much effort. Now, various political figures are arguing over who is to blame for this waste of tax payer money — almost €6 million to be exact. One organization, meanwhile, is benefiting from all this: a real estate agency by the name of Capital Bay GmbH, which is registered in Luxembourg. Berlin's department for social affairs and health has said that the lease for the property expires in 2018, thus putting an end to that particular problem.