The Federal Statistical Office has revealed that 2 percent of the people who lived in Germany at the end of 2016 had lodged asylum applications. That's more than double the figure for 2014. 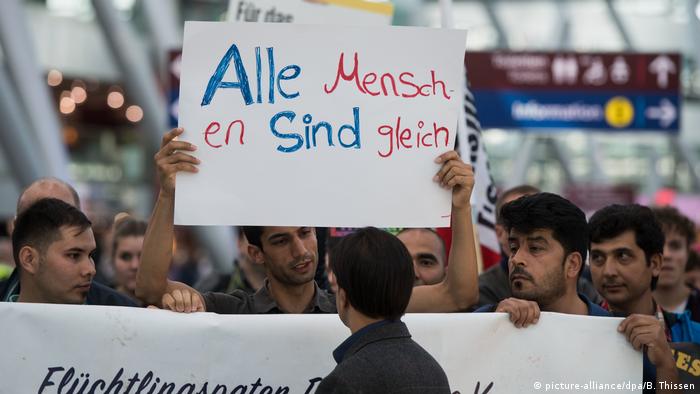 On Friday, the Federal Statistical Office (Destatis) revealed that 1.6 million people were officially registered as "seeking protection for humanitarian reasons" in Germany at the end of 2016, accounting for about 16 percent of foreign national residents and 2 percent of the overall population.

Drawn from Germany's Central Register of Foreigners (AZR), the figures also show that the number of asylum applicants increased by 851,000, or 113 percent, from 2014.

The report uses a variety of designations for the 1.6 million people, including people who are still going through the asylum procedure, people who have been granted refugee status according to the terms set out in the Geneva Convention, people granted subsidiary protection status and people whose applications have been rejected. In almost all cases residency is limited. 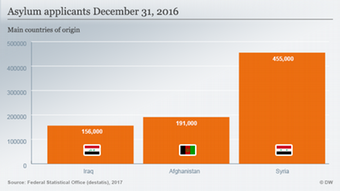 The statistics show that some 573,000 people (36 percent) were in asylum limbo at the time the statistics were tallied, with their cases not yet decided, while 872,000 (54 percent) had recognized protection status — though in 600,000 cases only for a limited time.

In 158,000 cases, applicants had been rejected and were therefore formally obliged to leave the country. However, about 118,000 (75 percent) had "tolerance" status, which permitted them to remain in Germany longer.

A plurality of the people who were rejected came from Serbia (17,000), followed by Albania (15,000). The government added the Balkan countries to its list of "safe" countries of origin in 2014 and 2015, respectively, which allows the German system to turn citizens of those nations away more easily.

More and more people are challenging rejections. In fact, according to a report in Thursday's Neue Osnabrücker Zeitung, Germany's administrative courts have seen a drastic increase in just one year, with 320,000 asylum-related cases on June 30, 2017, compared to 69,000 at the same time in 2016.

Concerns about the judicial bottleneck were raised in the summer by Robert Seegmüller, chairman of the BDVR, Germany's association of administrative judges, who predicted that the courts would have to deal with 200,000 cases in 2017 — an estimate that has already been exceeded.

"The administrative courts are so heavily burdened that the work can't be completed soon with the current personnel," BDVR board member Erich Müller-Fritzsche told the Neue Osnabrücker Zeitung. "Even the increase in personnel promised by politicians won't be enough for it."

Earlier this week the Nürnberger Nachrichten reported that the Federal Office for Migration and Refugees (BAMF) is shedding staff, even though the authority still has a backlog of cases to deal with.

Citing an internal document, the newspaper reported that BAMF had only 7,800 employees in September, down from about 10,000 at the beginning of the year. About half of BAMF's current staffers are on temporary contracts.

This drew some ire from German politicians. Burkhard Lischka, the domestic policy spokesman for the Social Democrats, put the blame on Interior Minister Thomas de Maiziere. "He was the one who removed around 3,000 jobs at BAMF in the last few months," Lischka said.

The number of migrants stopped at Germany's borders has doubled, while voluntarily deportations are also on the rise. The issue is set to be a major political issue ahead of elections next year. (28.12.2016)