Far-right attacks on refugee homes in Germany still happen nearly every day, statistics show. Though the total number of attacks is down, there are still more incidents than before the 2015 refugee crisis. 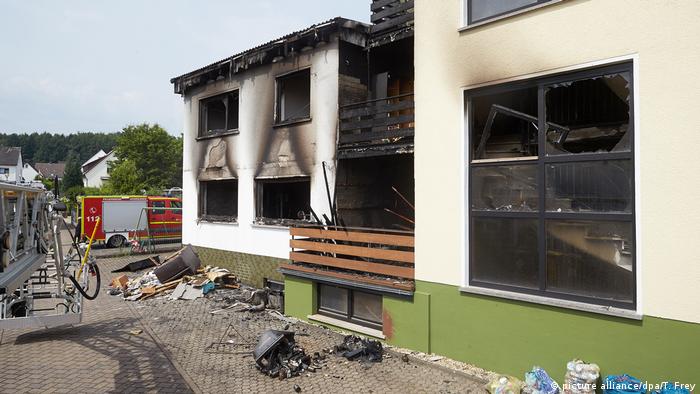 Fresh data from Germany's Federal Criminal Police Agency (BKA) obtained by German daily Neue Osnabrücker Zeitung shows that there have been 211 attacks on refugee homes throughout Germany in the first nine months of the year, plus an additional 15 incidents up to October 23.

The figure is down from nearly 900 attacks in the first nine months of 2016, but still higher than in 2014, a year before Germany took in more than 1 million refugees, more than any other country in Europe.

It was a contentious move by Chancellor Angela Merkel that triggered protests in Germany, but also earned her praise abroad and at home.

Read more: Two years since Germany opened its borders to refugees - a chronology

According to the newspaper, the BKA stresses that the number of attacks is constant and amounts to around 70 attacks per quarter.

Most of the attacks had a far-right background, with offenses ranging from property damage to violent attacks, arson and even attacks using explosives.

At the height of the refugee emergency in 2015, attacks on detention centers peaked at 1,031 for the full year.

Chancellor Angela Merkel has "guaranteed" she will oppose any limit on the number of migrants entering Germany. The chancellor's remarks just days before the German election put her at odds with her Bavarian ally. (12.09.2017)

What happens when officials refuse an applicant’s request to asylum? In Germany, applicants have recourse to administrative courts and can even approach the European Court of Human Rights. Here is a short explanation. (02.11.2017)