Germany′s Angela Merkel to talk refugee policy on trip to Jordan and Lebanon | Middle East | News and analysis of events in the Arab world | DW | 20.06.2018

Angela Merkel is set to meet with leaders in Jordan and Lebanon. The two countries have the world's highest number of refugees per capita — an issue expected to be a central theme of the German chancellor's trip. 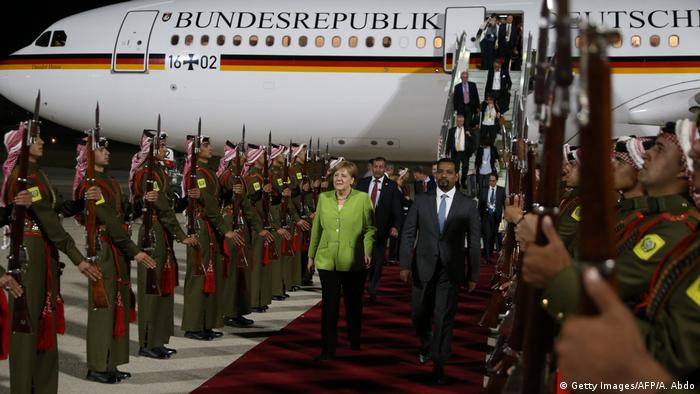 Discussions with students in Jordan and Lebanon and talks with Jordan's King Abdullah II and Lebanese Prime Minister Saad Hariri are just a few of the items on German Chancellor Angela Merkel's agenda during her two-day trip to the Middle East. Though education, investment and research are also part of the discussions, no topic will define Merkel's trip more than refugee policy.

Both Jordan and Lebanon are bearing a heavy burden as a result of the ongoing war in neighboring Syria. These relatively stable states have taken in a large number of refugees. According to the United Nations refugee agency (UNHCR), one out of every six residents in Lebanon is a Syrian refugee and in Jordan that number is one out of 11. In absolute numbers that means that, depending on estimates, somewhere between 1 and 1.5 million Syrian refugees are now in Lebanon. The UNHCR says that 700,000 Syrians were living in Jordan last year.

Whereas refugees in Jordan mainly live in large camps, such facilities do not exist in Lebanon. "There are only informal settlements, most refugees live in makeshift tents or they occupy ruins — anywhere they can find space. But they have very little security," says Bente Scheller, who heads the Beirut branch of the Heinrich Böll Foundation, a Green party-affiliated political organization.

While accommodation and provisions for refugees are centrally coordinated in Jordan, the situation in Lebanon is much more precarious. Even still, the human rights organization Amnesty International has called the conditions in camps along the Syrian-Jordanian border "catastrophic." The group says food, medical provisions and housing are all in short supply. 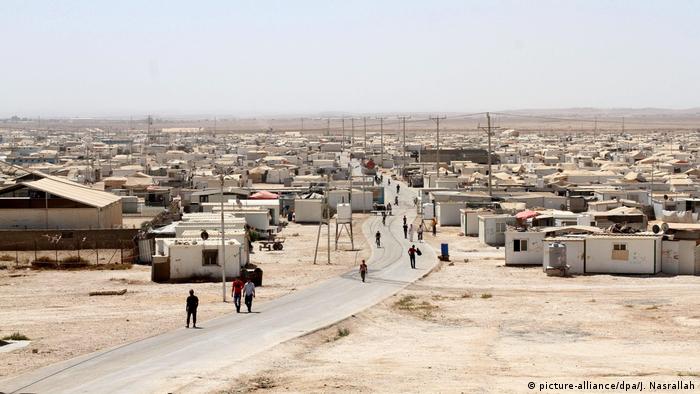 Jordan is home to roughly 700,000 Syrian refugees, according to UN figures

Syrians kept away from parts of Jordanian job market

Meanwhile, the United Nations says that roughly three-quarters of all Syrian refugees in Lebanon live below the poverty level, and more than half of them are living in overcrowded buildings in very densely populated neighborhoods. All that has led to an increasingly perilous situation for Syrians in Lebanon, says Scheller. The Lebanese government has also prohibited the UNHCR from registering refugees since 2016. Recently, Lebanon's foreign minister caused an uproar by announcing that he would not renew visas for UNHCR employees. Scheller believes that is a clear signal from the Lebanese government. "In the long run they will not tolerate the presence of refugees," she says. "They want more assistance and they want a solution to the problem."

Syrian refugees residing in Jordan are now allowed to work at certain jobs, something the German Foreign Ministry pushed hard for. Yet, criticism has grown as a result. Jordanians claim that the Syrians, who are often more highly educated and willing to work for less, are taking jobs away from them. The situation in Lebanon is similar. There, says Scheller, many refugees work illegally because the financial aid they receive from the UN is simply not enough to make ends meet.

Germany has become the second largest donor to both countries — after the United States — since the war in Syria began. Between 2012 and 2017, Jordan received a total of €1.8 billion ($2.1 billion) in aid, and Lebanon received roughly €1.2 billion.

Scheller says much of that money was invested in education: "Children are more likely to receive schooling. That was not the case in the initial years, because everyone thought refugees would be quickly returning home." Still, it has generally become more difficult to find money for refugee aid. Scheller says "donation fatigue" has set in after years of conflict. The UN World Food Program says Germany remains one of the world's most reliable donors, but that cash is otherwise becoming more scarce. Refugees in Jordan receive roughly €25 each month from the World Food Program, those in Lebanon receive about €22.

Thus, when Merkel sits down for talks in Jordan and Lebanon, one main topic of conversation will be just how much Germany is still willing to invest. For the more difficult the situation becomes for Syrian refugees, the more likely it is that they will simply move on to the next country, says Scheller. She believes it is important to point out that "Jordan is in an unfavorable geographic position and people do not leave Lebanon by boat." Instead, she says, they will travel through Turkey.

Still, Scheller stresses the fact that Germany is keenly interested in ensuring that both countries remain politically stable. She says it is thus in Germany's interest "to whole-heartedly support those who are doing the heavy lifting."