Germany′s Angela Merkel accused of ′buying′ deal on asylum with Emmanuel Macron | Germany | News and in-depth reporting from Berlin and beyond | DW | 20.06.2018

Right-wingers in Angela Merkel's coalition have slammed her eurozone budget deal with Emmanuel Macron over asylum policy. The criticism came as she attended a World Refugee Day event with her hard-line interior minister. 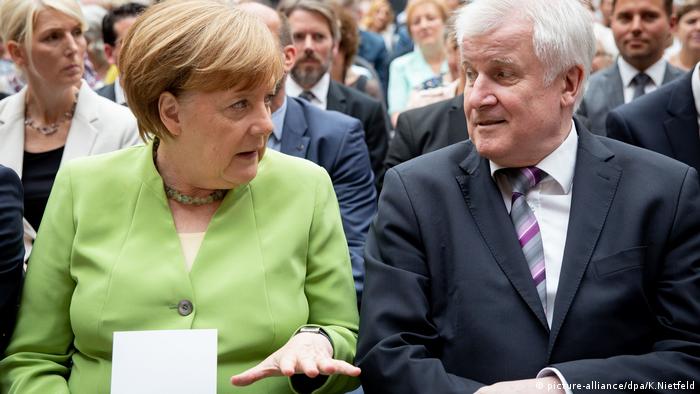 World Refugee Day could barely have come at a more delicate moment for Angela Merkel and Horst Seehofer. The German chancellor is still locked in a power struggle with her interior minister over his potentially illegal plans to turn certain asylum-seekers away at the border. And yet on Wednesday, the two government leaders attended an event at Berlin's German Historical Museum to commemorate the victims of forced displacement.

As if to make the afternoon slightly more awkward, the pair afterwards posed for photos on either side of Umeswaran Arunagirinathan, a former refugee who had fled the Sri Lankan civil war as an unaccompanied minor, attended school in Germany and briefly faced deportation, before eventually becoming a heart surgeon and German citizen.

Arunagirinathan had just given an extraordinary speech describing his childhood experiences: weeping as he realized his mother would not be traveling with him and being smuggled across the Middle East and North Africa by a human trafficker, before ending by explaining how much he owed Germany. Merkel thanked him in her own remarks, in which she underlined that "Germany will stand up both for its humanitarian responsibility to protect people who have fled war and terrorism, as well as its responsibility to solidarity in Europe."

The day before, Merkel had already tried to lay the practical foundations for how the country might stick to these two principles. In a meeting with French President Emmanuel Macron at a government retreat outside Berlin, the chancellor had agreed to Macron's request for a common eurozone budget, a move that looked like a significant concession by Merkel.

Merkel: 'Cohesion of this European Union is at stake'

Certainly Merkel's political enemies within her own conservative alliance, especially the right-wing figures in the Bavarian party, the Christian Social Union (CSU), were quick to fire potshots at the deal on Wednesday morning.

Bavarian State Premier Markus Söder warned Merkel against "mixing" migration policy and European budget policy, before insinuating that the chancellor was buying a solution to the impasse. "We can't now start introducing additional shadow budgets or try to soften the stability of the currency," he said. "Or even try to achieve some solutions with German payments."

As if to up the ante, Söder was speaking ahead of a meeting with Austrian Chancellor Sebastian Kurz in the city of Linz, a summit at which the two leaders were to agree a joint position on migration and apply more pressure on Merkel.

But it wasn't exactly clear what the agreement between Merkel and Macron actually entailed. Their joint announcement was conveniently vague on substance, with the suggestion being that nothing will be fully confirmed on the budget until all EU leaders meet next week.

Given that a longstanding German fear is subsidizing poorer EU countries, the fact that the planned budget does not include a clear "stabilization" mechanism for countries dealing with recessions is significant. Likewise, it appears that while Merkel has budged on the significant symbolic gesture of agreeing to a shared budget, she is still uncommitted on its size and ultimate scope.

Macron previously spoke of a budget that would equal "several GDP points" of the eurozone's annual GDP. That is currently around €12 trillion ($14 trillion), which would mean that a budget of, say, 4 percent could make it as big as €500 billion. Germany currently contributes around 20 percent to the common EU budget.

Yet it appears that Paris will now settle for a figure closer to 1 percent of eurozone GDP, which would roughly equate to between €100 and €150 billion, depending on eurozone GDP in a given year. That would mean a far more manageable financial burden for Germany.

Macron has also reportedly cooled on any demands for a so-called fiscal transfer system, opting instead for one where struggling countries would suspend their own contributions into the common fund for a period, rather than receiving payments from other countries.

Merkel also avoided making any firm commitments on details of the governance of any new eurozone system for winding up failed banks. Nevertheless, the news that a common eurozone budget, paid into by Germany, could be in place as early as 2021 is a climbdown from previous German positions.

German Chancellor Angela Merkel and French President Emmanuel Macron are meeting to discuss the future of the EU. Both have presented their proposals and DW shows where they see eye to eye — and where they are at odds. (19.06.2018)

A Bavarian official known as a "tough dog" for taking a harder line against asylum-seekers is the new head of Germany's migration office. The agency's former chief was fired on Friday over an asylum application scandal. (17.06.2018)

As Marine Le Pen and President Emmanuel Macron go into a runoff election, French voters will need to ask themselves if they want to preserve their democracy, Lisa Louis writes.