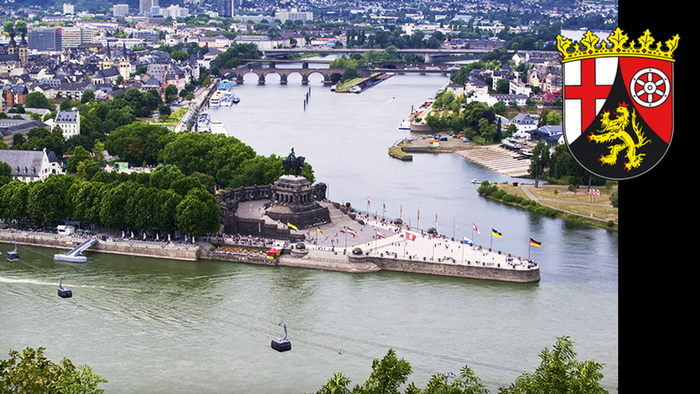 This state in western Germany is one of the country's oldest tourist regions. The Rhine and Moselle rivers and their surroundings have attracted tourists since the early 19th century. There are more than 500 castles and palaces to discover in Rhineland-Palatinate and fertile countryside that is famed for its wines, from Riesling from the Palatinate to sparkling wine from the Moselle region.

Along the German Wine Route

The German Wine Route is a themed tourist route that runs through south-western Rhineland-Palatinate. From almond blossoms in the spring to the grape harvest in the autumn, the multifaceted countryside is always enchanting. Good wine, delicious food, romantic wine-growing villages and castles —Check-in host Nicole Frölich finds the right mixture for a relaxing autumn vacation. She went there in 2019.

The Villa Ludwigshöhe lies on a hill overlooking the vineyards near Edenkoben. It's a small palace from the time when the Palatinate belonged to Bavaria. Nowadays the former summer residence of King Ludwig I is devoted to art: from concerts by young classical musicians to exhibitions of paintings by the Palatinate impressionist Max Slevogt.

The Upper Middle Rhine Valley between Koblenz and Bingen in northern Rhineland-Palatinate has been a UNESCO World Heritage site since 2002. With its picturesque castles and steep, vine-covered slopes, it's considered one of the most beautiful sections along the entire river. Such artists asJoseph Mallord William Turner stylized the romantic lure of the Middle Rhine Valley.

For more than 900 years, Jewish life shaped the three cities of Mainz, Worms and Speyer. Among Jews all over the world they are known as Shum cities. The metropolises on the Rhine were the center of Jewish scholarship and later were of similar importance as Jerusalem. Join Check-in  presenter Lukas Stege on his journey to the cradle of European Jewry.

Amphitheater, city gate, baths — 2000 years ago, the Romans lived in Trier in the far west of Rhineland-Palatinate. They built a town for themselves with every conceivable comfort — and with it, important structures that now have UNESCO World Heritage status.

The Moselle is the longest tributary of the Rhine and one of the most charming river valleys in Germany. The Moselle meanders in narrow bends, flanked by vineyards, past the town of Perl in the Saarland, via Trier to Koblenz, where it flows into the Rhine. Check-in presenter Lukas Stege went along the Moselle cycle path. He plunged into the underworlds of Traben-Trarbach, found castle ruins and a winegrower on the Calmont, who introduced him to the secrets of the Moselle Riesling.

Cycling along the Moselle

A Highlight in a 360-degree video

The Moselle river winds its way for over 200 serpentine kilometers between Trier and the Middle Rhine Valley, past green vineyards and idyllic towns such as Bernkastel-Kues.