Through the eyes of a painter

William Turner's paintings are some of the most important among Rhine Romanticists. Since 2014 a route link the places where the artist produced his famous works. DW's Anne Termeche learns more. 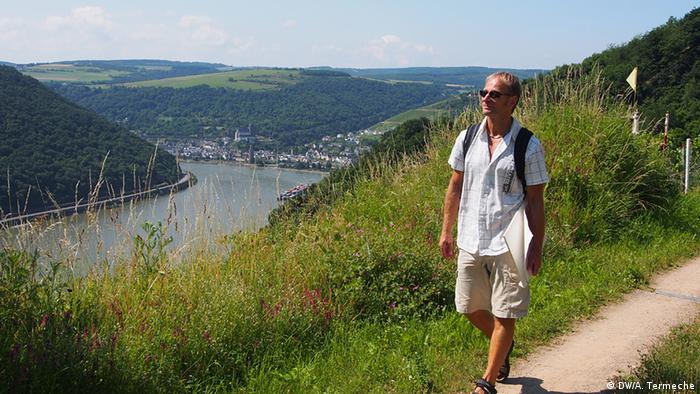 Hiking on the new Turner Route

I have an appointment with Armin Thommes. He's a painter, Turner expert, and instigator of the William Turner Route in the Upper Middle Rhine Valley. From a small folder, he fishes out a copy of a watercolor painting that mark the route. The colors are delicate and fluid. Contours are barely perceptible, except for castle ruins set against a vivid orange and violet.

"Turner pioneered the Impressionist movement with his style," says Thommes, adding that the painter's landscapes helped spark the Middle Rhine tourism boom that began in the 19th century.

In 1817 the English painter made the first of many trips to the Rhine. Within two days he hiked from Koblenz to Bingen. I calculate the distance: That's about 60 kilometers (37 miles)! I'm happy that in this summer heat, Armin Thommes and I only have a short stretch to go. From St. Goar, we'll follow the banks of the Rhine to the southern end, where Turner painted a view of the Lorelei. St. Goar is located diagonally across from the famous cliff. 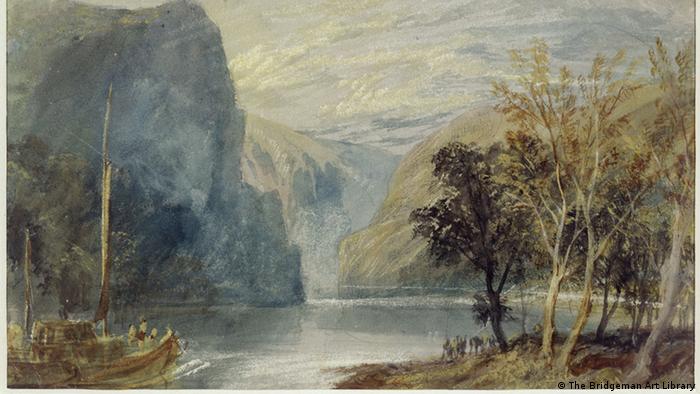 While hiking along the Rhine, the famous Brit sketched about 100 pages. Once he was home in England he then added color. About 50 large-format watercolors and oil paintings of the river were crafted in this way. Painters and poets from the Romantic period portray the Rhine landscape with a sense of longing. 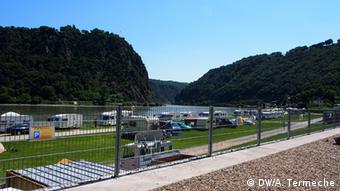 Campers instead of horse power

In some places I can imagine the towpath that Turner took. The Rhine Cycle Route now runs along the path where horses once pulled cargo ships upstream. Highway 9 parallels the Rhine. The traffic noise is a gentle hum compared to the hellish rumble of the trains that thunder through the narrow Rhine valley by the minute.

Turner experienced only silence here. For just one moment, I try to imagine it - to block out the noise, erase the campground and its trailers just across the riverbank, and ignore the cargo and cruise ships. I imagine a sailboat, drifting silently down the Rhine. Finally, listening to the steady murmur of the river, I begin to understand that you can be nostalgic for a place like this.

Since 2005 Armin Thommes has systematically scoured the shore landscape between Koblenz and Bingen. Thorny brambles reinforced by steep embankments didn't deter him.

"But something else makes orientation a bit difficult sometimes," says Thomas. "Turner wasn't really taken with reality. For him, the effect was the ultimate goal." Where nature lacked in drama, the painter gladly assisted. He combined visual axes and shifted a castle here or tower there.

"Good to see when looking at Oberwesel," promises Thommes. 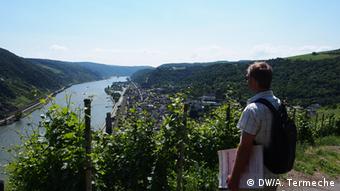 Oberwesel is a village just two river bends and seven kilometers further down the Rhine. Turner painted the town from an elevated vantage point, which Armin Thommes has perfectly identified.

No one knows how Turner got there, though. We take the high road, above the Rhine Valley, across from Lorelei. In blistering heat, the path winds through wheat fields, cool shady forests and vineyards. Now and then we catch a glimpse of the river below us. We reach our goal just as a herd of tour busses pulls up.

Armin Thommes leafs through his file: Turner's view of Oberwesel. "There was a second axis involved, take a look," he says.

In the photo a white tower is depicted. It's impossible that Turner could have seen that tower from this position. But it gives his landscapes a certain charm. All 26 positions that Armin Thommes has identified are equipped with information boards. Everyone is able to see the landscape through the eyes of the artist and learn how Turner managed not only to paint the landscape, but to capture its essence. 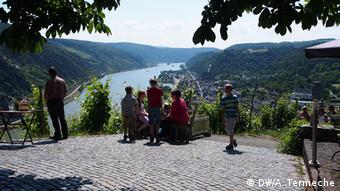 In Turner's day, traveling to the Rhine was trendy in intellectual circles. After the narrative was developed by painters, writers and thinkers, the landscape morphed into something extraordinary. "Their works are known today as 'Rhine Romantic,'" explains Thommes.

The Middle Rhine Valley was not prepared for what followed - one of the earliest examples of mass tourism in Europe. Today, hundreds of thousands of tourists visit the valley, which was listed as a UNESCO World Heritage site in 2002. Ideas like Armin Thommes' are welcome.

"The Turner Route speaks to visitors seeking culture, but also to those who have never heard of Turner," said Bertram Beck, chairman of the Middle Rhine Valley Association. 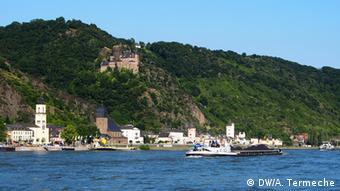 A summer evening on William Turner Plaza in St. Goar

We're back in St. Goar, where we started this morning. Turner enjoyed staying here during his travels on the Rhine. It's also Thommes' home. In St. Goar, as in many places along the Middle Rhine Valley, there is a dizzying collection of souvenir shops. For me, a real romance killer.

That evening I take refuge at the William Turner Plaza, one last tip from Arim Thommes. It's nothing more than a couple of wide, white stairs and simple stone benches on the riverbank. Behind me is Rheinfels Castle, to the left Maus Castle, across the way Katz Castle, and in front of me the Rhine in the evening sun.

Nearly 200 years ago, William Turner stood here. And he was perhaps just as enchanted as I am now.

A muse, a playground, an industrial necessity: join us on a tour of Germany's most enchanting river.

The Middle Rhine Valley between the cities of Bingen and Koblenz draws hundreds of thousands of tourists annually. Since the early 19th century, travelers have come here for the famous romantic ambience of the Rhine. (05.08.2013)

Rhine - from Neuenburg to Breisach

Visitors flock to Rhine - one of the world's busiest waterways - for its romanticism. One particularly interesting destination is the Upper Rhine region, where nature is reconquering some of the river landscape. (29.07.2013)

The Museum on the River - Hildegard von Bingen offers a five-room exhibit on Romantic painters.