Speyer, Worms and Mainz, regarded as the cradle of Jewish life in Europe, were also known as "Jerusalem on the Rhine." The three cities are applying to UNESCO for the title World Cultural Heritage.

Jewish life shaped Speyer, Worms and Mainz for more than 900 years. The three cities on the Rhine River were considered important centers of Jewish learning and the cradle of Jewish life in Europe. They were known as "ShUM cities" on the basis of the initial letters of Speyer, Worms and Mainz in Hebrew. Speyer is called "Shpira" in Hebrew, Worms "Warmaisa" and Mainz "Magenza". Sh stands for Shpira, U for Warmaisa, (W is pronounced like U) and M for Magenza. The term "ShUM" is like a logo, a name that is known to Jews worldwide. 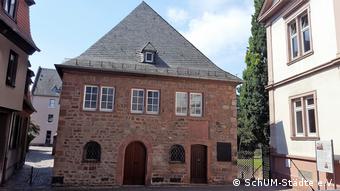 Under the motto "ShUM Cities on the Rhine — Jewish Heritage for the World", Speyer, Worms and Mainz, together with the ShUM Cities Association, the Jewish Community and the State of Rhineland-Palatinate, have applied to UNESCO for recognition of their Jewish heritage as World Cultural Heritage. The application was submitted in January 2020 and a decision is expected in July 2021 at the earliest.

A brief look into the Jewish past of Speyer, Worms and Mainz

The history of ShUM begins in Mainz, one of the oldest cities in Germany, where the Romans already settled. Among them presumably also Jews. Later, in the 10th century, the scholar Moses Calonymus, a merchant and scholar, came to the city. With him, a spiritual heyday began. Many famous rabbis arose from his family.

But especially well known is Gershom ben Jehuda, born in Metz in 960. He taught in Mainz and attracted students from all over Europe. During his term of office, modern laws such as the binding monogamy of Jews and the secrecy of correspondence are passed. Also a very modern divorce law.

After Mainz, Worms turned into a center of learning on the Rhine. This is where the great scholar Rashi studied in the 11th century. In the cathedral city of Speyer, on the other hand, Bishop Rüdiger settled Jews around 1048 in order, as he said, "to multiply the prestige of this place a thousand times over". Speyer became the third important center of Jewish culture after Mainz and Worms.

But the Jews were not able to live in lasting peace on the Rhine. There were repeated pogroms and the communities were completely wiped out during the Nazi era.

On the trail of ShUM history

Traces of a great history remain to this day. For example the Jewish courtyard ("Judenhof") in the old town of Speyer. Here you can see the ruins of the synagogue for men and women. Next to it a ritual bath (mikvah) from the 12th century. 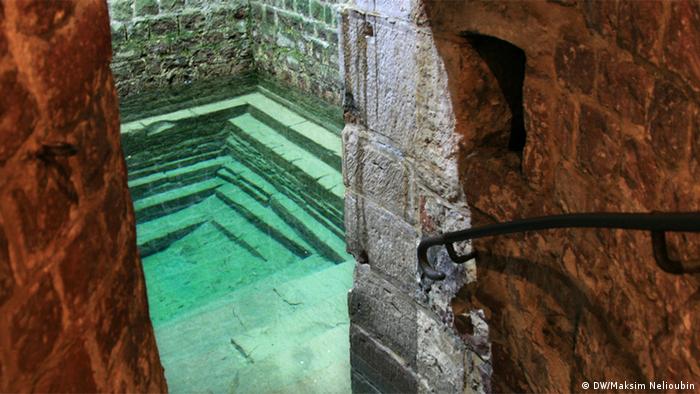 The synagogue in Worms was destroyed repeatedly over the centuries, but the local Jews rebuilt it again and again. "It is a place with many layers of time," says Susanne Urban from the association ShUM-Cities, which is responsible for the preservation and promotion of the Jewish history of Speyer, Worms and Mainz. Her office is located right next to the synagogue. "Jews in Worms kept saying: We are building this up, we belong here and want to stay! This shows incredible resilience and the desire to be accepted." 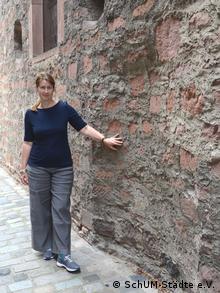 Susanne Urban of the ShUM-Cities Association in Worms

Just as in Speyer, there is also a mikvah in Worms. It is currently being restored. "These communal ensembles of synagogue, women's synagogue and ritual bath as well as teaching house and community center are unique in the world. They exist in this form only here on the Rhine. And then there are the large cemeteries," explains Susanne Urban.

The cemetery "Holy Sand" (Heiliger Sand) in Worms is almost 1,000 years old and has survived all pogroms and wars. "The Heiliger Sand is a very important place for Jews to reconstruct their family history and visit the graves of scholars," says Susanne Urban. "There are 2,500 visible gravestones from many centuries — a sea of stones." About 86,000 visitors visit the Jewish sites of Worms every year. 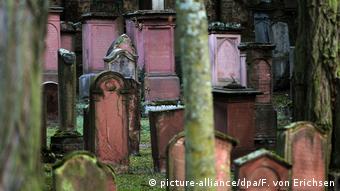 The "Judensand" (Jew sand) cemetary in Mainz with 196 gravestones

Nowadays there is not so much to see in Mainz. There is also a Jewish cemetery here, but only a few remnants of columns from the old synagogue have been preserved. In 2010 an architecturally exceptional new synagogue was built.

Although the New Synagogue is not part of the UNESCO application, it makes a significant contribution to ensuring that Jewish life can once again take place in Speyer, Worms and Mainz today. "Immigration from the former Soviet Union has greatly increased the community. Without this influx, Jewish life in Rhineland-Palatinate would certainly have died out," says Jewish television journalist and volunteer synagogue leader Andreas Berg. "Today there are about 1,400 Jews living in Mainz and Worms, but of course this is a negligible number compared to the past." 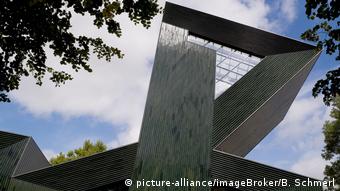 The New Synagogue in Mainz: a spectacular building by architect Manuel Herz

According to Andreas Berg, the fact that Jewish life has returned to the ShUM cities is very important for the application for World Heritage status. "We hope, of course, that our Jewish past will receive more attention through the application to UNESCO. And that it becomes clear that Judaism is more than Shoa and the Holocaust. It has a deeply rooted and flourishing tradition in Europe."

Nowadays about 100,000 Jews are once again living in Germany. The Shoa is a thing of the past, but hostilities are still a topic of discussion today. "The threats have become greater," says Andreas Berg. "Many rabbis and also the Central Council advise against wearing a kippah in public because many Jews have already suffered bad experiences with anti-Semitism." So the presence of police officers in front of synagogues has become a daily occurrence. Andreas Berg hopes that at some point the security precautions will no longer be necessary. "I would like Jewish life to become a matter of course. And for the ShUM cities I wish that people recognize that we can be proud of this part of German-Jewish history!"

The Jewish heritage of Speyer, Worms and Mainz

Speyer, Worms and Mainz are considered the cradle of European Jewish life. For more than 900 years, the three cities were shaped by Jewish life. Traces of this time can still be found today. (23.01.2020)