Foreign Minister Heiko Maas said Germany will not be taking part in a US-led mission to secure oil tanker ships sailing near Iran. The US ambassador in Berlin slammed the decision, saying Germany has responsibilities. 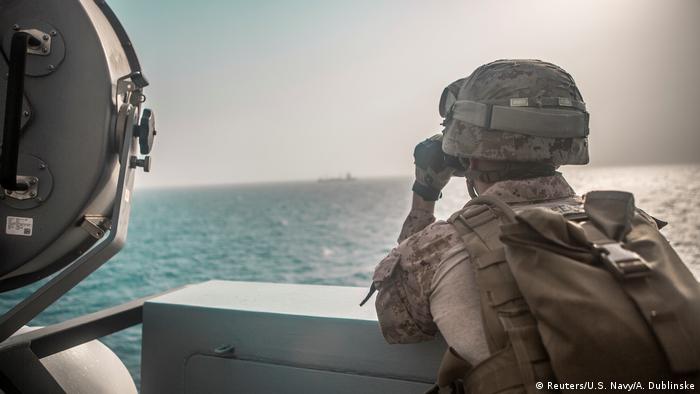 Germany will not participate in a naval mission in the Strait of Hormuz that is led by the United States, Foreign Minister Heiko Maas said on Wednesday.

"Germany will not take part in the sea mission presented and planned by the United States," Maas told reporters during a trip to Poland.

The German government said it remains in close consultation with France and the UK over a European approach to the freedom of navigation crisis in the Persian Gulf.

But US Ambassador to Germany Richard Grenell condemned the decision and called on Berlin to step up.

"Germany is the biggest economic power in Europe," he told the Augsburger Allgemeine newspaper. "This success brings global responsibilities."

"America has sacrificed a lot to help Germany remain part of the West," Grenell said, adding that Americans were paying billions of dollars to keep 34,000 soldiers stationed in Germany.

'There is no military solution'

In explaining the decision not to join the mission, Maas said that the German government believes the US strategy of exercising "maximum pressure" against Iran "is wrong."

He added that Berlin wants to avoid further escalating the situation in the region and that the government wants to focus on a diplomatic solution to tensions with Iran, emphasizing that "there is no military solution."

Germany and its European allies are trying to salvage the 2015 Iran nuclear deal after US President Donald Trump withdrew from the pact and reimposed sanctions last year.

The US had formally requested Germany and other European allies take part in the naval mission, which it says is needed to protect shipping routes in the Strait of Hormuz.

Almost a third of all oil exports pass through the strait, which is located between Iran and Oman.

Washington proposed the mission earlier this month, saying it was trying to get a coalition together to offer military escorts to commercial ships in the Gulf.

Last week, the UK said it wanted to create a European-led mission in the Gulf to ensure the safe travel of cargo. Several EU states showed interest in the British proposal, which could potentially compliment US efforts.

The move came in response to Iran seizing the British-flagged Stena Impero oil tanker and its 23 crew members as it passed through the Strait on July 19.

Tensions between Iran and Europe have been increasing over Tehran's decision to abandon parts of the 2015 deal that restricted its nuclear program.

Relations between the US and Iran have also worsened in recent months. Washington has blamed Tehran over a string of tanker attacks in the Strait of Hormuz, while both countries claim to have shot down drones belonging to the other state in the past several weeks.