German government divided over joining Strait of Hormuz naval mission | Germany | News and in-depth reporting from Berlin and beyond | DW | 29.07.2019

Germany's coalition government is split over whether to contribute to the UK's proposed mission to protect shipping in the Strait of Hormuz. The Social Democrats say military options would only escalate the conflict. 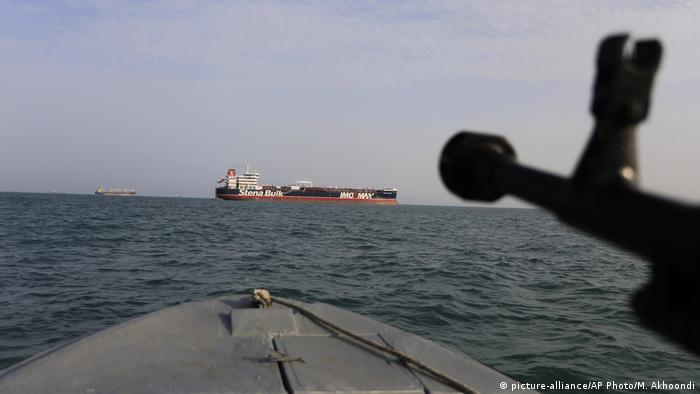 The German government is struggling to find a clear line on whether or not to take part in a European naval mission in the Strait of Hormuz. The UK government last week proposed a joint European mission to defend shipping in the region, with Iran and Britain each seizing a tanker flagged by the other country in recent weeks.

Norbert Röttgen, a senior figure in Chancellor Angela Merkel's conservative Christian Democratic Union (CDU) and chairman of the parliamentary foreign affairs committee, responded by suggesting that Germany had a moral duty to engage, given the country's economic dependency on exports.

"Our prosperity lives on free shipping," Röttgen told DW last week. "And we have to make clear that we stand alongside our British friends, partners and allies who are affected. There must be joint European action. Unfortunately there are fundamental differences in Iran policy with the US, which is why we can't cooperate with the US just like that."

But the center-left Social Democrats (SPD), the conservatives' junior coalition partners who currently run the Foreign Ministry under Heiko Maas, have been much more circumspect.

"A German participation is currently neither necessary nor opportune," Karl-Heinz Brunner, SPD member of the Bundestag defense committee, told DW by email. "Of course securing free trade routes is extremely important, but I am convinced that this would also be possible by diplomatic means. In the current situation, military options could contribute to further destabilization." 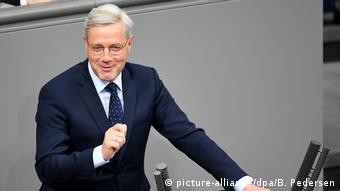 The CDU's Norbert Röttgen said Germany has a duty to help

Read more: Iran-UK stand-off: what next for Britain?

Caught between the two parties, government spokespeople struggled to offer a clear line on the issue when speaking to the media on Monday. Foreign Ministry official Christofer Burger said that there were no new developments to report, since "there has been no further concretization of the idea that has come from European partners."

Meanwhile, for Germany's opposition parties, the whole idea is dangerous: "Germany should not walk into the trap of [US President Donald] Trump and his poodle [UK Prime Minister Boris] Johnson and let itself be led into a conflict or the preparation for a war against Iran," Sevim Dagdelen, Bundestag member for the socialist Left party, told DW.

There were also plenty of questions over what exactly Germany could contribute militarily to such an operation. "The navy has been operating at its limits for years," said the SPD's Fritz Felgentrau, another member of the Bundestag's defense committee. "It can only take on new burdens if it is relieved of others, otherwise there is a threat of personnel or technical shortages."

Journalist and German defense expert Thomas Wiegold said there was very little that Germany's military, the Bundeswehr, could practically offer. "The easiest and fastest thing to do would be to deploy a maritime patrol aircraft," he told DW. "If we're talking surface vessels, it could be a bit tight for the German navy. They have a limited number anyway, they have more ships under repair than previously planned because repairs took longer than planned. Most probably they would have to take warships out of either NATO units or other missions."

What is even possible?

The largest German warship nearby is the frigate Hessen, currently in the Aegean Sea as part of a NATO mission to improve "information exchange and reaction times against human traffickers and their networks," according to the Bundeswehr website. "It's patrolling between the islands to stop migrants crossing over from Turkey to the Greek islands," said Wiegold.

Germany also has smaller ships patrolling the waters off the Lebanese coast as part of the ongoing United Nations mission to police the ceasefire between Israel and Lebanon. "If they were take one of these ships it would be not a military problem but a political problem, because both missions are pretty high on the political agenda," said Wiegold.

Moreover, any joint European mission in the Strait of Hormuz would probably be limited to monitoring and surveillance. The Royal Navy, itself stretched by various duties, only has one warship in the Persian Gulf area, and has just sent a second. Escorting the dozens of trading ships that travel through the strait every day would be impossible, and then there is the issue of which ships should be protected — some fly non-European flags, even if they're operated by European companies.

Finally, there are legal problems to be addressed: The waters of the Strait of Hormuz belong either to Iran, the UAE, or Oman, with a very narrow lane of international waters between them. And yet, the narrow strait remains vital to world trade. It is 21 nautical miles (39 kilometers) wide at its narrowest point, and an estimated 20% of the world's total traded oil passes through it.

The UK government has suggested setting up a European naval mission to defend ships in the Persian Gulf amid heightened tensions with Iran. Tehran says the proposal is "hostile" and "provocative." (28.07.2019)