Pressure is growing on the German government to lend its military weight to a potential European naval mission in the Persian Gulf. The UK government floated the idea of a joint European operation last Monday. 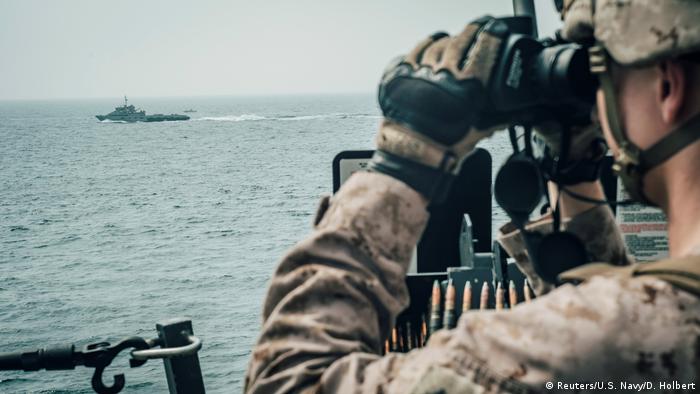 Wolfgang Ischinger, former German ambassador to the US and now head of the Munich Security Conference, on Sunday added his voice to calls for more German military engagement in the Persian Gulf.

There is an ongoing standoff over shipping rights between Iran and the UK, with both countries seizing oil tankers. Last Monday, London suggested setting up a European naval mission to defend the ships in the region.

Speaking to the Welt am Sonntag newspaper, the veteran diplomat insisted that Germany had a moral duty to play its part. "Hardly any other country is as dependent on the freedom of international shipping as export champion Germany," Ischinger said.

For that reason, he added, Germany should not just "watch from the sidelines" when a defensive mission in the Gulf was being discussed.

Not ruling anything out

For its part, the German government has not yet ruled out taking part. On Thursday, new Defense Minister Annegret Kramp-Karrenbauer suggested that Germany might take part in a European naval mission off the Iranian coast, though Foreign Minister Heiko Maas emphasized that the planning was still in its infancy.

"Whether Germany takes part can only be decided when we have clarity over the form of such a mission," he told the Funke Media Group on Friday.

He said that Germany would need to know whether such a mission would be under the auspices of the EU, or the United Nations, or some other international organization, and whether or not the ships would have to be prepared for combat.

Maas confirmed that he had discussed the issue with the incoming British foreign secretary, Dominic Raab, whose predecessor Jeremy Hunt floated the idea of a European naval mission on Monday. Maas said he was keen for the UK, France and Germany to present a united front separate from the path being pursued by the US.

"We will not take part in the American strategy of 'maximum pressure,'" Maas said. US President Donald Trump has employed increasingly belligerent rhetoric against Iran for the past year, in the hope of forcing a new Iran nuclear deal by threatening new sanctions.

The issue could cause a fresh rift inside the German coalition government, with members of the conservative half, Angela Merkel's Christian Democratic Union (CDU), favoring military engagement, while the center-left junior partner, the Social Democratic Party (SPD), takes a more skeptical line.

On Sunday, Die Welt newspaper quoted the SPD's interim co-leader Rolf Mützenich questioning whether it was wise to "leave a military footprint in a region where there is a threat of new wars."

Last week, Iran's Islamic Revolutionary Guard Corps (IRGC) seized the UK-flagged oil tanker Stena Impero in the strategic Strait of Hormuz, claiming that it turned off its transponder and failed to respond to distress calls after hitting an Iranian fishing boat. The ship and its crew of 18 Indians, three Russians, a Latvian and a Filipino are in the port of Bandar Abbas.

Britain said that there was no evidence the Swedish-owned tanker hit a fishing boat and that it was outside Iranian waters. The seizure has prompted criticism of the government in London about why it had not taken more proactive measures to protect its ships.

The seizure of the Stena Impero came two weeks after British Royal Marines impounded the Iranian supertanker Grace 1 off Gibraltar because of allegations it was taking oil to Syria in violation of EU sanctions.

Iran has referred to the British seizure of the Grace 1 as "piracy" and demanded the ship be freed.

Unlike Germany, France and Britain both have military bases in the region: France in the United Arab Emirates, the UK in Bahrain.

Despite appeals from human rights groups, the sentences were carried out on two men who were sentenced last year on terrorism charges. There have been allegations of torture and mistreatment. (27.07.2019)