Oman wants to mediate between Iran and the UK to end the row over the seizure of oil tankers, Iranian state media said. India has been dragged into the fray, with over 50 of its nationals detained on board. 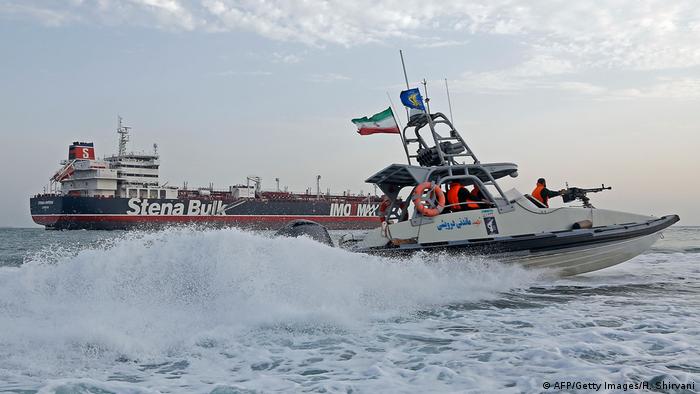 Oman is to play a mediating role to resolve the current dispute over impounded tankers between Iran and the UK, Iranian state media reported Friday.

The foreign ministers of Oman and Iran, Yusuf bin Alawi bin Abdullah and Mohammad Javad Zarif, are to meet in Tehran on Saturday, the IRNA news agency said.

Ties between Iran and the UK have taken a hit over the past several weeks, with both countries seizing oil tankers belonging to the other country.

Last week, Iran's Revolutionary Guards detained Stena Impero, a Swedish-owned, UK-flagged oil tanker in the Strait of Hormuz, a strategic waterway in the Persian Gulf that has become a flashpoint between Tehran and the West.

The waterway is vital to global commerce as a fifth of the world's crude oil supplies and a quarter of liquefied natural gas shipments flow through it. Iran claimed that the Stena Impero had collided with a fishing boat and violated international law.

Tehran's move is widely seen as a reprisal for the UK's seizure of the Iranian tanker Grace 1 off the British territory of Gibraltar in the Mediterranean on July 4. The ship was suspected of carrying oil to Syria in violation of EU sanctions.

Iran has referred to the British seizure as "piracy" and demanded the tanker be freed.

The tanker crisis comes amid heightened tensions in the Middle East, as a result of US President Donald Trump's "maximum pressure" strategy on Iran. Washington has unilaterally imposed stringent economic sanctions against Iran with the aim of putting a total stop to Iranian oil exports.

The US and Iran also came dangerously close to direct military confrontation in June after Tehran shot down an American drone in the region.

In response to Iran's tanker seizures, the British government has sought to assemble a European-led naval mission to ensure safe shipping through the Persian Gulf. Denmark said on Friday it welcomed the proposal and would consider a military maritime contribution.

"The Danish government looks positively towards a possible contribution to such initiative," Foreign Minister Jeppe Kofod said in a statement. "The initiative will have a strong European footprint."

India has been dragged into the Iran-UK dispute as the detained ships' crews included over 50 Indian nationals. While there are 24 Indians in the crew of the Iranian tanker Grace 1, the Stena Impero has 18 Indians in its crew. There were a further 12 Indians aboard the Panama-flagged MT Riah, which was seized by Iranian authorities on July 14.

The Indian embassy in Iran obtained "consular access" to the Indian crew of the Stena Impero late Thursday, a spokesman for India's Ministry of External Affairs said.

"All 18 Indian crew members on board are safe and doing fine. Will continue to push for their early release," V. Muraleedharan, a deputy foreign minister, said in a Twitter post.

Officials from the High Commission of India (HCI) in London have also met the Indian crew members on the Grace 1 tanker, Muraleedharan said. "Crew's morale is high. Assured all assistance for early release. HCI London will facilitate necessary travel document and related arrangements," the minister tweeted.

London has denounced Iran's seizure of a British-flagged oil tanker in the Gulf as a "hostile act." German Foreign Minister Heiko Maas says Europe is trying to prevent an "uncontrollable military escalation." (21.07.2019)