Is a US-led war with Iran on the horizon as troops head to Saudi Arabia?

The US is sending troops to Saudi Arabia amid concerns that it is preparing for a war with Iran. It will be the first deployment of American forces in the kingdom since the US toppling of Saddam Hussein's Iraqi regime. 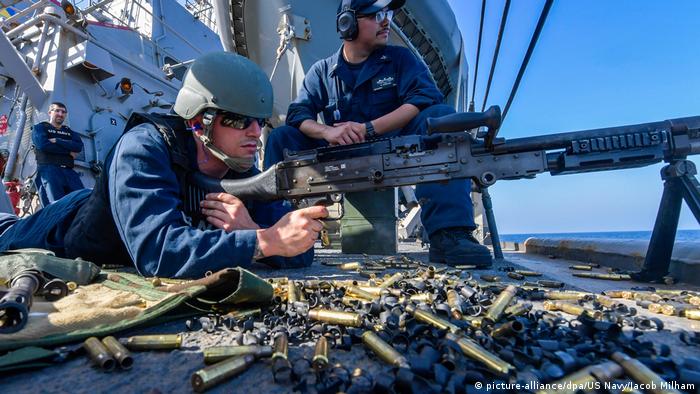 Statements from Riyadh and the US Central Command (CENTCOM) have confirmed the deployment of US forces in Saudi Arabia amid a looming threat of war with Iran.

"Based on mutual cooperation between Saudi Arabia and the United States of America, and their desire to enhance everything that could preserve the security of the region and its stability ... King Salman gave his approval to host American forces," the Saudi defense ministry announced.

CENTCOM said the deployment "provides an additional deterrent, and ensures our ability to defend our forces and interests in the region from emergent, credible threats."

Riyadh and Washington have not revealed the number of troops that will be deployed in the kingdom, but some US media reports claim at least 500 American soldiers will be located at the Prince Sultan military air base, south of Riyadh.

Relations between Tehran and the US have deteriorated significantly since President Donald Trump withdrew from the 2015 nuclear deal last year and reimposed tough sanctions that have hit Iran's oil exports.

On Friday, Iranian Revolutionary Guards seized a British-flagged oil tanker and briefly detained a second vessel in the Strait of Hormuz , a choke point for around a third of the world's sea-borne oil.

Iran's move comes after Britain detained an Iranian tanker, Grace 1, near Gibraltar on July 4. A senior Iranian official then threatened "reciprocal action" over the incident.

A few days later, the UK accused Iranian forces of trying to capture one of its cargo vessels, forcing a Royal Navy warship to intervene. That prompted Iran's Supreme Leader, Ayatollah Ali Khamenei, to accuse the "vicious British" of "piracy" and vow retaliation.

On Thursday, the US claimed it had destroyed an Iranian drone, but this was disputed by Iranian officials.

CENTCOM chief Kenneth McKenzie said on Thursday the US would work "aggressively" to ensure maritime safety in the Persian Gulf during a visit to the Prince Sultan air base.

Is the war imminent?

Houshang Hassanyari, a political analyst at the Royal Military College of Canada, told DW that tensions were escalating in the Persian Gulf, with "maritime transportation becoming even more dangerous there."

Some experts say that control over oil is one of the major reasons behind the US' conflict with Iran.

"I believe this is exactly what the Islamic Republic wants to achieve. If foreign countries decide not to use the Strait of Hormuz [due to security issues], the Revolutionary Guard will achieve its goal without closing the strait," he added.

Andreas Krieg, a professor at King's College London, told AFP news agency that the US troop deployment in Saudi Arabia "is part of posturing and the US trying to increase its military options in case of a strike on Iran."

But "five hundred US troops in Saudi Arabia are hardly a buildup, particularly when we are thinking about a war with Iran," said Krieg, adding that there could be a potential deployment of an air squadron at the Prince Sultan air base.

Saudi Arabia's Prince Sultan base was the location for thousands of US troops and jet fighters from 1991, starting with Operation Desert Storm after Iraq invaded Kuwait, through to 2003 when the US-led invasion of Iraq toppled dictator Saddam Hussein's regime.

European countries have urged Tehran to scale down tensions and avoid targeting oil tankers in the Strait of Hormuz.

Germany and France expressed "solidarity" with the United Kingdom after Iran's seizure of the Stena Impero on Friday.

"This is an unjustifiable interference in commercial shipping that dangerously escalates an already tense situation," the German Foreign Office wrote on Twitter.

Germany and France are signatories to the Joint Comprehensive Plan of Action (JCPOA), a 2015 nuclear deal with Iran, which is now in jeopardy.

In June, German Foreign Minister Heiko Maas held talks with his Iranian counterpart, Javad Zarif, in Tehran, in a bid to ease tensions in the Persian Gulf. But since Maas' Iran visit, the situation has only deteriorated in the region.

"The Trump administration offered talks without preconditions to Tehran, but Iranian authorities have declined them. The Iranian regime expects more appeasement from the international community, particularly from the Europeans," Paulo Casaca,a Portuguese member of the European Parliament from 1999 to 2009 and an Iran expert, told DW.

"International appeasement of the Iranian theocracy allowed it to suppress its people and destabilize the Middle East. The nuclear threat is more real than ever. I believe that President Trump's Iran policy is the only realistic hope to control this situation," Casaca added.

Ali Vaez, director of the Iran project at the International Crisis Group think tank, told DW in an interview in May that a military confrontation with the US would be a "godsend" to Iran's hard-liners, who would "try to use it to further militarize the domestic sphere and appropriate all levers of power."

President Donald Trump has said the US Navy shot down an Iranian drone after a ship took "defensive action." Earlier, Iran said it had seized a foreign oil tanker, accusing it of smuggling oil in the Persian Gulf. (18.07.2019)

President Donald Trump says he’s not intent on toppling Iran’s regime to stop it acquiring nuclear arms. His nominee for defense secretary Mark Esper says the US ‘needs to get back on the diplomatic channel.’ (16.07.2019)

A year after Donald Trump pulled the US from the international nuclear accord with Iran, the Middle East nation announced it would no longer adhere to some "voluntary commitments" in the accord. (18.05.2018)