London has denounced Iran's seizure of a British-flagged oil tanker in the Gulf as a "hostile act." German Foreign Minister Heiko Maas says Europe is trying to prevent an "uncontrollable military escalation." 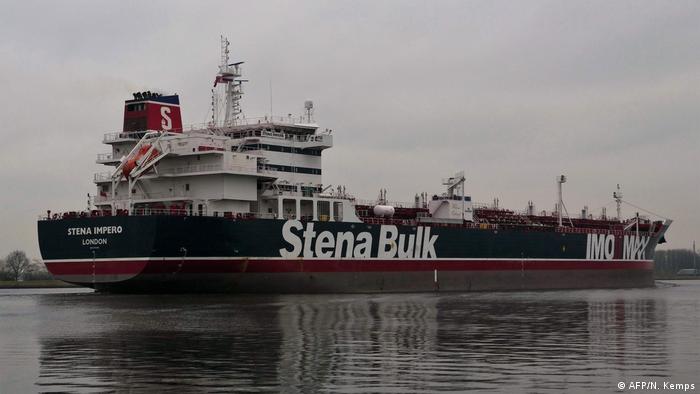 A phone call between the top British and Iranian diplomats has failed to defuse the escalating crisis in the Strait of Hormuz following the seizure of a British oil tanker and the impounding of an Iranian supertanker.

British Foreign Secretary Jeremy Hunt wrote on Twitter late Saturday that during the call he had "expressed extreme disappointment" to his Iranian counterpart, Foreign Minister Mohammad Javad Zarif, for not de-escalating the situation.

He denied that it was a "tit-for-tat" situation following Britain's role in seizing the Iranian oil tanker Grace 1 off Gibraltar two weeks ago for allegedly violating EU sanctions on Syria, adding that Iran's latest seizure was "utterly unacceptable."

Zarif responded to Hunt's comments by saying that "the seizure of the British tanker was due to maritime violations and requested by the relevant port authorities," Iranian state media reported.

Britain is considering several options in response to the seizure, according to the country’s junior defense minister. Tobias Ellwood told Sky News on Sunday that Britain would consult with its international allies.

"Our first and most important responsibility is to make sure that we get a solution to the issue to do with the current ship, make sure other British-flagged ships are safe to operate in these waters and then look at the wider picture."

Meanwhile, Oman — whose northern Musandam Peninsula juts into the Strait of Hormuz — called on the UK and Iran to solve their differences diplomatically. In a statement issued on Sunday, the Omani Foreign Ministry said the Gulf nation was in contact with all parties to secure safe passage through the Strait of Hormuz.

The Swedish operator of the British-flagged Stena Impero said the tanker and its 23 crew members remained in Iran's Bandar Abbas port after Iranian forces boarded the vessel on Friday.

Iran's Revolutionary Guards posted a video online showing a speedboat pulling alongside the tanker. Troops carrying machine guns and wearing ski masks were lowered from a helicopter to the deck, the same tactics used by British Royal Marines two weeks ago when they seized an Iranian tanker off the coast of Gibraltar.

Erik Hanell, chief executive of Stena Bulk, which operates the Stena Impero, said the tanker "was in full compliance with all navigation and international regulations" when it was approached by "unidentified small crafts."

"It was in international waters. We have transponders on the ship so that we always know exactly where it is."

Germany and France have demanded Iran immediately release the British-flagged tanker and said they stood by London in the dispute.

Germany's Foreign Minister, Heiko Maas, told the country's Bild am Sonntag newspaper that "in a potentially uncontrollable military escalation, there would be no winners, only losers."

He appealed to Iranian leaders to listen "to the voices of reason, not to leave the field [open] to the agitators."

Britain, Germany and France are signatories to a 2015 nuclear deal between Tehran and world powers. Under the deal, Iran agreed to restrict nuclear work in return for having sanctions lifted.

Tensions rose further last month when Iran shot down a US drone. Trump called off retaliatory US airstrikes just minutes before they were due to be carried out.

On Friday, the US and Saudi Arabia — Iran's rival — said 500 American troops would be deployed to an air base south of Riyadh after a 12-year absence of American forces in the kingdom.

Iranian authorities have seized a British-flagged oil tanker and briefly detained a second vessel in the Strait of Hormuz. Tehran has ordered the Stena Impero's 23 crew members to remain on board at Bandar Abbas port. (19.07.2019)