The German Foreign Ministryis seeking clarity on recent controversial comments made by the new US ambassador, Richard Grenell. In an interview with Breitbart News, he said he hoped to "empower" the right wing in Europe. 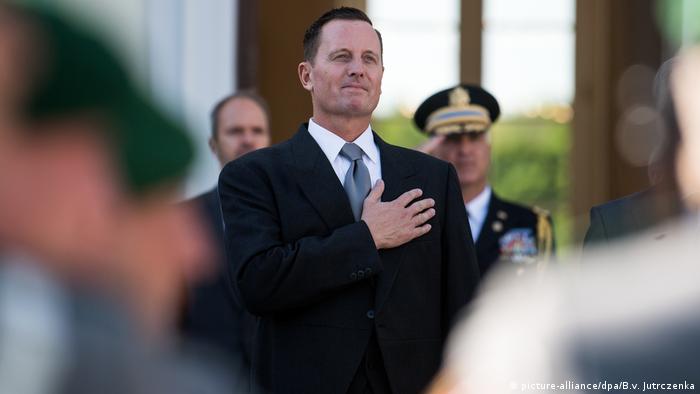 Grenell is 'excited' about conservative resurgence in Europe

On Monday, Germany's Foreign Ministry announced that US Ambassador Richard Grenell would be expected to address comments he made to Breitbart News when he meets with ministry officials on Wednesday. Spokesperson Christofer Burger said Grenell's inaugural visit would provide an opportunity to "explain how he wants his statements to be understood."

In the interview with the far-right website, Grenell had said he was excited by the rising wave of conservatism within Europe, adding that he saw his task as one of "empowering" Europe's right-wing governments and budding leaders. He told Breitbart:

In 2017, Kurz's Austrian People's Party (ÖVP) formed a governing coalition with the far-right Freedom Party (FPÖ). Austria's young government remains one of the loudest voices in Europe for securing the bloc's external border and has been critical of German Chancellor Angela Merkel's refugee policy.

Rolf Mützenich, deputy leader of the Social Democrats in parliament, told DW that the issue should be addressed swiftly with US Secretary of State Mike Pompeo. "Clearly the US ambassador sees himself as an extension of a right-wing conservative world movement, and not as a representative of his country entrusted with improving and protecting political, economic and cultural relations between the US and Germany."

Mützenich added that Grenell's actions violated the 1961 Vienna Convention, under which diplomats do not interfere in the domestic affairs of a country.

Franziska Brantner, who specializes in foreign policy for the Greens, told DW that Grenell's comments should not be merely ignored. The administration of US President Donald Trump is doing everything it can to "destroy the trans-Atlantic alliance and the EU from within," she said.

"Strengthening the right-wing and anti-establishment movements in Europe is just another building block in President Trump's isolationism and 'America First' agenda," Brantner said.

Based on growth predictions, Germany is set to spend just over 1 percent of GDP on defense in the next four years, well short of the 2 percent mark agreed on by NATO allies during the 2014 summit in Wales.

Germany's predicament is not helped by the fact that its military needs billions of euros more than envisaged in the latest budget to modernize its aged equipment.

Despite only formally assuming the ambassadorship last month, Grenell had already raised eyebrows in Germany's parliament, the Bundestag,  by urging German companies to stop doing business with Iran after Trump announced plans to withdraw the US from the multinational nuclear pact with the country.

Donald Trump's new ambassador in Berlin: Who is Richard Grenell?

US President Donald Trump intends to nominate former UN spokesman Richard Grenell as his country’s ambassador to Germany, the White House has said. DW looks at what the choice could mean for Berlin-Washington relations. (02.09.2017)

Defense Minister Ursula von der Leyen has said Germany's army needs a bigger budget if it is to keep up with NATO requirements. Her comments came ahead of a major summit of NATO defense ministers in Brussels. (15.02.2017)

The ex-head of Germany's refugee agency has alleged he told Angela Merkel about the excessive demands placed on staff. A BAMF official is facing allegations she received bribes in exchange for processing asylum requests. (03.06.2018)

"Maverick" retired colonel Douglas Macgregor was foreseen as US ambassador to Berlin by Donald Trump. Instead, says the Pentagon, he's to become a key adviser to the incumbent president's replacement defense secretary.

Germany to offer refuge to Afghans who helped military 18.04.2021

NATO chiefs have cautioned against an overly rapid US withdrawal from Afghanistan wanted by Donald Trump in what diplomats say is a "flurry of calls." NATO's gradually reduced mission involves more than 30 nations.