Germany turning people back at the airport: What you need to know | Germany| News and in-depth reporting from Berlin and beyond | DW | 18.03.2020

Germany turning people back at the airport: What you need to know

Germany has begun denying entry to non-EU citizens in an attempt to stem the spread of the pandemic. Entry may still be possible for travelers in 'urgent' situations. 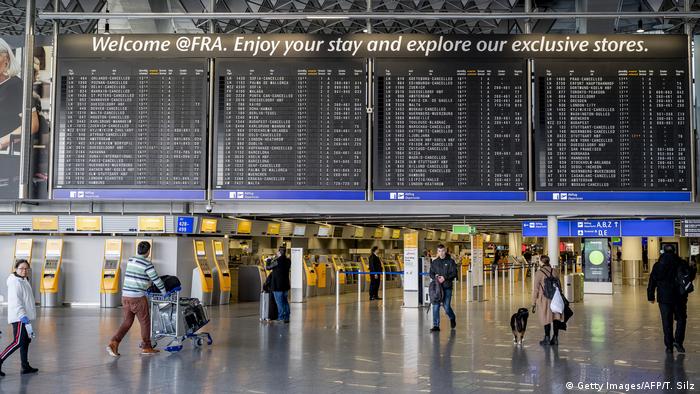 The move was in accordance with a coordinated entry ban agreed upon by European Union member states the evening before.

"So far, we’ve had around 140 people that have had their entry refused," said Reza Ahmari, public relations director for the German Federal Police at the Frankfurt Airport.

"The new measures affect around 120 flights today at Frankfurt airport. And we have around 9,000 passengers that we have to review."

The number of those who will be turned back has yet to be specified, however, airlines have been asked to fly non-EU citizens denied entry back to their airport of origin.

Despite the increase in workload for border controllers, waiting times have not been significantly impacted.

"It’s not a big problem because the pandemic has extremely reduced air traffic," Ahmari said. "That means we have enough capacity to manage the additional work because we don’t have as many travelers as usual."

The measures have also been put in place at the Munich Airport, the second busiest airport in Germany after Frankfurt, according to the airport’s website. Hamburg Airport could not be reached for comment.

Who can enter? Who can't?

Holders of shorter-term visas, including tourist and business trip visas, will not be allowed to enter the country, Ahmari from the German Federal Police said.

It is also still possible for transit passengers to make their connecting flights as long as they remain within the designated transit area of the airport.

Entry will also be allowed to travelers who have an "urgent reason" to enter Germany. In such cases, entry allowance will be decided on a case by case basis, the police said. Travelers must provide documentation to prove the necessity of their trip.

Travelers who do not meet these conditions will be turned back, Germany's Interior Ministry said on its website.

Despite dozens of flights taking Germans home amid the coronavirus pandemic, Foreign Minister Heiko Maas tells DW the repatriation operation will take several days. €50 million have been earmarked for the mammoth task. (17.03.2020)