Hundreds of millions of people fly in and out of German airports every year. What restrictions have been put in place by Germany's biggest airports to help fight the COVID-19 pandemic? 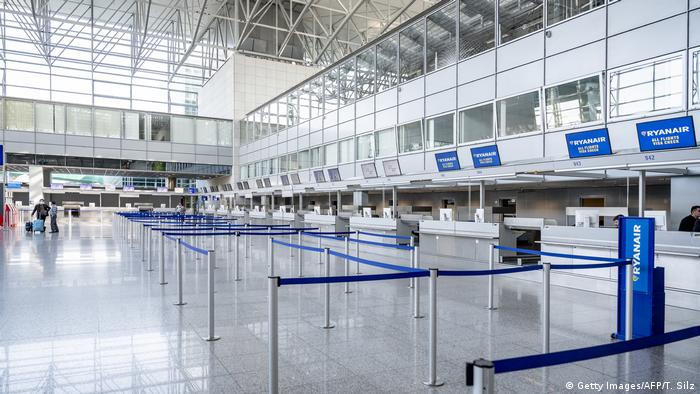 As COVID-19 spreads across Europe, Germany has joined other European countries in setting up partial border closures and US President Donald Trump has stopped arrivals of non-US citizens from Schengen countries. Airlines and airports in Germany are feeling the economic strain — and are facing mounting pressure to closely screen travelers for symptoms.

German Chancellor Angela Merkel announced on Monday a temporary restriction on "non-essential" flying and holiday travel, including by plane. This is likely to see the number of passengers at German airports plummet still further

DW takes a look at how Germany's five busiest airports are handling the effects of the COVID-19 pandemic.

Germany's largest and Europe's fourth largest airport has seen far fewer passengers so far this year than normal, reporting a 14.5% drop in passenger numbers in the last week of February compared to February 2019.

The airport is not screening passengers for symptoms of COVID-19, following German government guidelines, instead leaving individual airlines to decide on their policies. Any passengers arriving from mainland China, Hong Kong, Macau, South Korea, Japan, Iran and Italy have to fill out "Passenger Locator Cards" to inform Frankfurt health officials how they can be contacted for the next 30 days.

Frankfurt airport will also be loosening the restrictions on night flights in order to allow planes carrying Germans from abroad to return.

Munich airport has also not implemented screenings for all passengers. Bavaria's biggest airport is the secondary hub — after Frankfurt — to Lufthansa, Germany's largest airline. Lufthansa has canceled all flights to China until April 24.

AirChina, which operated several flights out of Munich, has also offered free refunds to many ticket-holders. Munich is expecting passenger numbers to continue to remain low and has advised passengers to check with airlines before attempting to fly in or out of their airport.

The state capital of Germany's most populous state of North Rhine-Westphalia, where the highest number of COVID-19 cases in Germany has been reported, has taken a grim view of the months to come. Airport chief executive Thomas Schnalke told local newspaper Rheinische Post that the situation is comparable to the aftermath of the attacks of September 11, 2001 and that he expects airlines to go bankrupt.

The airport is following all advice given by the North Rhine-Westphalian authorities in terms of screening passengers, and allowing health authorities to implement checks on passengers if and as they see fit.

The bigger of Berlin's two airports (the other is Berlin Schönefeld) lifted its ban on nighttime flights over the weekend to allow Lufthansa to return German citizens on holiday or living abroad. Lufthansa has now reduced its number of flights coming in and out of all German airports to one in 10 for long-haul flights and one in five for short-haul flights.

The northern city of Hamburg has advised passengers to check what restrictions certain airlines have put in place, and up to 40% fewer passengers are expected. At the same time, the airport remains operational for certain flights, and screenings are not in place for all passengers.

"There are updates every day," the airport wrote on Twitter. "Inform yourself before your journey on its status."

"We are seeing the airlines adjusting their schedules and making massive cuts to some extent," airport chief executive Michael Eggenschwiler told the dpa news agency. He compared the millions of euros expected to be lost to the eruption of Iceland's Eyjafjallokull volcano in 2010, which grounded hundreds of flights.

Global travel has come to a standstill in the coronavirus crisis. Many countries are imposing an entry ban on foreigners. Even within Europe most borders are closed. Is it still possible to travel? (16.03.2020)

US restricts travel from EU: What you need to know

US President Donald Trump has announced a 30-day travel ban on most foreign nationals who have been in 26 European countries in the last 14 days. The ban does not include US citizens. (12.03.2020)