In an attempt to slow the spread of COVID-19, controls are back in place along Germany's borders with several of its neighbors. Exceptions are being made for commuters and the transit of goods. 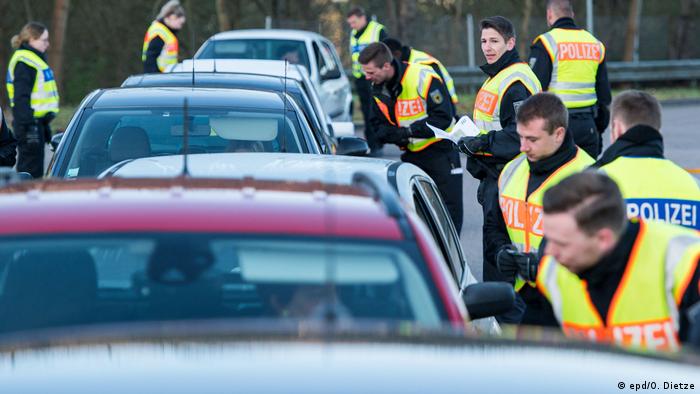 Germany on Monday became the latest country in Europe to restrict movement across its borders in a push to stem the spread of the coronavirus. The measures were announced on Sunday by Interior Minister Horst Seehofer and went into effect at 8:00am local time (07:00 UTC).

DW's Bernd Riegert is at the German-French border near Saarbrücken. "We talked to some people who were turned back and controlled here at this border crossing. They are quite understanding that this is maybe necessary to fight the coronavirus," he said. "Some people said they will go back to France and stay there for the time being. A lot of understanding and no anger here."

Read more: Follow all the latest developments in our rolling coverage

Which crossings are affected?

The border closures will affect crossings in Austria, Luxembourg, France, Switzerland and Denmark.

But the German government's restrictions will not affect the flow of goods and commerce. Border crossing for commuters will remain possible, Seehofer said on Sunday.

Additionally, Germans who are currently in any of the neighboring nations have the right to cross the border to return home. The same rules apply to foreign nationals who hold a German residence permit.

Berlin has discouraged its citizens from traveling in general, urging them to abstain from leaving the country at this moment.

Maas warned that Germans who travel abroad at this time run the risk of getting stuck in foreign countries and may not be able to return home, as other nations have moved to impose strict rules on freedom of movement.

What other measures has Germany taken?

Germany's border closures come after a weekend in which regional state governments across the country implemented social distancing rules, such as canceling events and encouraging bars and restaurants to close.

In nearly all the federal states, schools and daycare facility closures went into effect on Monday. National rail operator Deutsche Bahn announced over the weekend that it was cutting regional services due to a lack of passengers.

Living in Rome under the shadow of coronavirus

With all of Italy in quarantine to halt the spread of COVID-19, people are adjusting to a new way of life. Under lockdown, Megan Williams reports from her home in Rome. (14.03.2020)

US President Trump is attempting to entice a German lab to develop a vaccine exclusively for the US, a German newspaper reported. The company, however, later rejected claims of a sale of the firm or its technology. (15.03.2020)