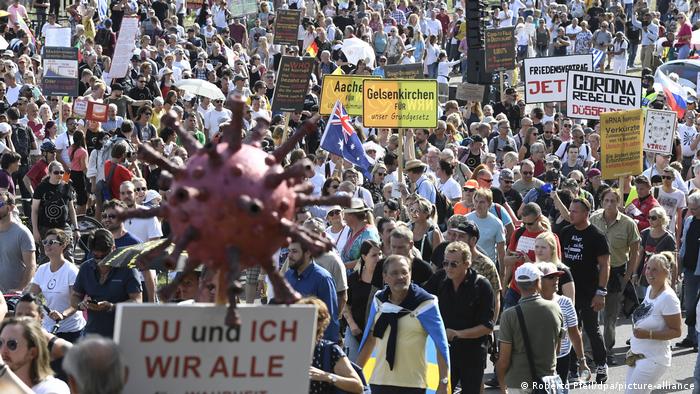 Thousands of people attended a protest on Sunday in the western German city of Dusseldorf against government restrictions imposed to combat the COVID-19 pandemic.

Ahead of the rally, the organizers said they hoped as many as 50,000 people would attend, while police reckoned some 10,000, according to the DPA news agency. In the end, however, only a few thousand joined the protest as of mid-afternoon.

Participants did not have to wear masks but had to keep at a distance of at least 1.5 meters (5 feet) from others, as is stipulated by pandemic bylaws in the state of North Rhine-Westphalia, of which Dusseldorf is the capital.

There were banners with slogans such as "End to panic, coronavirus is a lie," while songs criticizing the coronavirus restrictions were played, according to the Associated Press.

There were also several counterdemonstrations in the city.

A regional branch of the Querdenken (Lateral Thinking) movement was behind the protest. The group has staged rallies across the country, including in the capital Berlin. 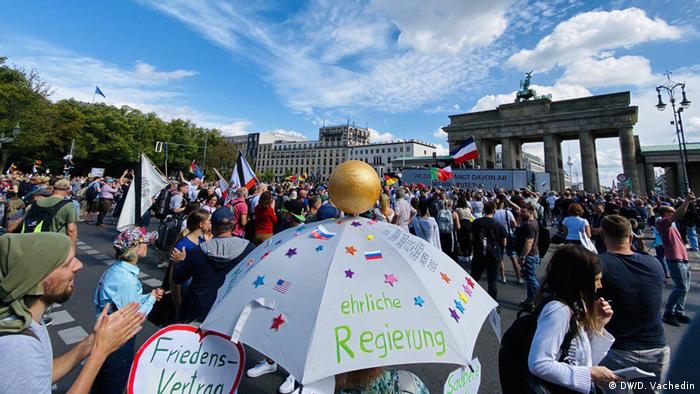 Previous protests have attracted participants who, while united in their rejection of the government's strategy to manage the pandemic, represent a wide range of worldviews.

They include people opposed to vaccines who see the pandemic as a hoax intended to generate revenue for big pharmaceutical companies and often cite Microsoft founder and philanthropist Bill Gates as the instigator. Others see the pandemic as real, but as having been caused by the 5G cellular networks currently being rolled out across the world. Still, others believe the measures taken to prevent COVID-19 spreading are an example of government overreach leading to authoritarianism.

Of greatest concern to authorities, however, is the contingent of far-right protesters who use the protests as a platform for propagating their often anti-Semitic ideology. Some have been seen at previous rallies carrying the former imperial flag, often used as a symbol by the far right.

At a protest in Berlin on August 29, a group of such protesters rushed the steps of the Reichstag building, provoking widespread outrage.

In contrast, a protest last weekend in Munich, which took place at the site of the world-famous Oktoberfest — canceled this year because of the pandemic — was largely peaceful. Some 120 participants from the crowd of 10,000 are facing legal action, however, most of them for their failure to wear masks.