Munich bans alcohol on Oktoberfest grounds due to coronavirus

The ban was put in place to prevent "replacement parties" for the event. This year marks the first cancellation of the world-famous folk festival since World War II. 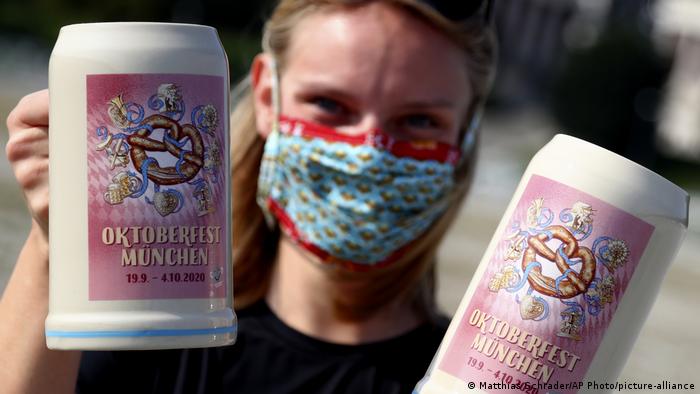 Saturday should have marked the start of Oktoberfest celebrations, but events across Germany were canceled due to the coronavirus pandemic.

In addition to a canceled celebration, Munich authorities even banned alcohol on the Theresienwiese – the ground where the main celebration is usually held – from 9 a.m. local time (0700 UTC/GMT) on Saturday. The ban was put in place to prevent "replacement parties" for the event, which draws around 6 million visitors annually.

Police sent officers on Saturday to break up spontaneous large parties on the Oktoberfest grounds. But police reported that the atmosphere had remained peaceful, with just a few people, some in traditional Oktoberfest dress, walking or having picnics in small groups.

Read more: Munich may be without Oktoberfest — but it's still a lot of fun

In lieu of a party in the usual location, 54 city landlords issued invitations to a "pub Wiesn," using the local name for the festival, to encourage revelers to celebrate in local pubs.

The event is controversial because Munich has recently risen above the benchmark 50 new cases per 100,000 residents in a week.

The invitation followed rumors that several people were planning to drink on the Theresienwiese anyway, despite the ban on the event.

According to the city, "two private individuals" registered demonstrations on the Theresienwiese for Saturday – one to demonstrate for "our right to an alternative Oktoberfest" and another for the purpose of "preserving tradition and customs."

At noon local time, the scaled-back event was marked by the traditional breaking open of beer barrels. Celebrations will run until October 4.

A history of cancellations

This year's cancellation, which was announced in April, is the first one since World War II, but is not, however, the first in the folk festival's 210-year history.

In total, about two dozen Oktoberfest events have been canceled.

The fourth Oktoberfest, in 1813, was canceled because of battles with Napoleon. While a few decades later, cholera became rampant. The festival was canceled twice for this reason: once in 1854 and another time in 1873. Nearly 7,400 people died in Munich alone during the first wave of cholera.

Among the dead was the wife of the king of Bavaria, Queen Therese, whom the festival grounds are named after. Oktoberfest was also canceled in 1866 during the Austro-Prussian War, and during both world wars.

It was not until 1949 that the festival really became consistently celebrated. "Since that time, we hope that the Oktoberfest will never be canceled again," Munich's official city website once said about the celebration.

Nationwide case count on the rise

This year's canceled Oktoberfest comes on the heels of the highest daily infection toll in Germany since April, and a rising number of cases in both Bavaria and its capital, Munich.

Germany has registered over 272,000 cases and over 9,300 deaths since the start of the pandemic.