Munich's Oktoberfest was canceled this year due to the coronavirus. But the city has come up with alternative events that could also benefit tourists from abroad in the future. 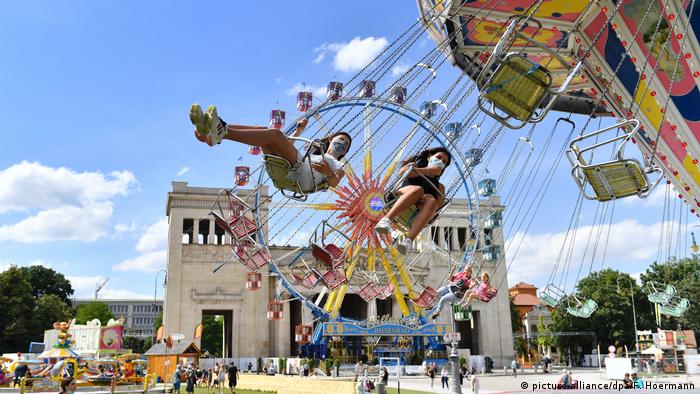 Christin spent the summer under palm trees, enjoying the feeling of sand between her toes — right in the center of Munich, on the Theresienwiese. This is where, as of mid-July, there would normally be a large construction site: Workers with low loaders and large cranes erect the beer tents and entertainment machinery of the Oktoberfest. Ten weeks of construction, two weeks of fun, and then another five weeks to clear it away again.

But not in this summer of coronavirus. For the first time since the Second World War, the Oktoberfest — or the "Wiesn," as the Bavarians affectionately call it — will not be taking place. Instead, the people of Munich have the Theresienwiese all to themselves. A good 42 hectares (104 acres) of space. "This is a completely different way of life", says Christin, a young woman from Munich. 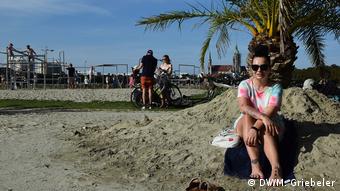 Christin enjoys the peace and the summer feeling on the Theresienwiese

Losses of over a billion euros

Clemens Baumgärtner, director of the Oktoberfest and economic advisor to the city of Munich, says he was "sad, shaken and almost paralyzed" when the world's largest public festival was canceled in April. "It has created a vacuum that is difficult to fill — and of course many businesses rely on the Oktoberfest."

Baumgärtner's office has calculated that the losses are approximately €1.23 billion ($1.5 billion). Revenues that the city, the barkeepers, traders, cab drivers, hoteliers, restaurants, traditional clothing, souvenir vendors and many others are deprived of this year. More than 500 businesses work on the festival grounds alone, through which 13,000 temporary jobs are created every year.

Enjoying life together in dirndl dresses and lederhosen

The Wiesn is not merely a major economic factor for Munich, but also a tourist attraction and an event that has been adopted internationally. Oktoberfest festivals in Munich style are held all over the world, such as in Blumenau, Brazil, as well as in Kitchener, Canada, and in Qingdao, China.

The original Oktoberfest on the Theresienwiese normally attracts some 6 million visitors. Strangers and friends in lederhosen and dirndls normally party on the beer hall benches in a collective exhilaration; pensioners stroll between the fairground stalls and nibble roasted almonds; lovers win teddy bears for each other at the shooting stands; and children rejoice in the traditional chairoplane rides. "The Wiesn is simply a way of life," Baumgärtner tells DW. 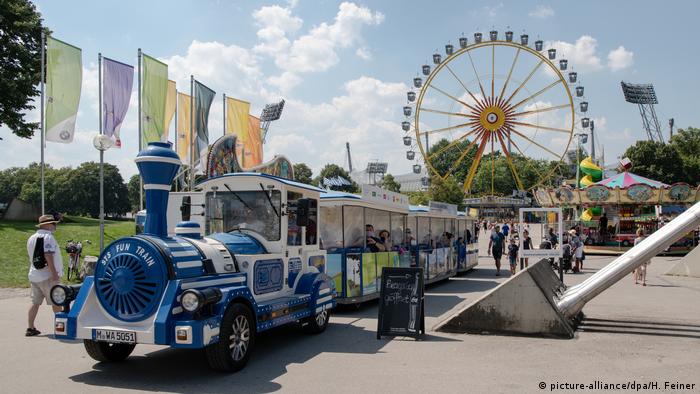 "Summer in the City" is also held in Munich's Olympic Park

The alternative is a citywide summer party

You cannot replace the Oktoberfest, but you can save what can be saved. Like the jobs of the  traveling traders. The Munich Department of Economics, therefore, created the event "Summer in the City". There are now rides, booths and pop-up beer gardens in various places in Munich, naturally with COVID-compliant distancing and hygiene rules.

On the Theresienwiese, for example, sand has been piled up with palm trees in it. There is a parcours climbing frame on which athletes train and children can do gymnastics. In the evening, the municipal sports department offers free aerobics lessons with a trainer behind the palm tree lane. There are also occasional concerts.

The people of Munich are taking advantage of these options. Not far from the beach students have set up a beer tent. "Hey, hey, baby, uh, ah," DJ Ötzi's Oktoberfest hit, echoes across the area. "Recently, some even set up a proper pool here," says Christin. 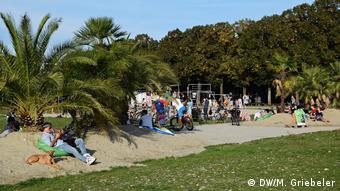 Munich's Theresienwiese: Palm trees, sand and a climbing course instead of Oktoberfest tents

She lives on the edge of the Theresienwiese and comes to the man-made beach every day to sunbathe and read. "Of course, it's a pity that the Oktoberfest had to be canceled, but I almost like it better this way," she says, because the city has developed ideas for the youth and for the traveling traders.

Königsplatz is very popular with Instagrammers

Peter Bausch, acting chairman of the Munich Traveling Traders Association, stands in his beer truck on Königsplatz and shrugs his shoulders. "It's a small step towards normality, but we are missing a whole season," he says. Nevertheless, the "Summer in the City" has helped a little, also for his mood: He is happy to be able to work. And: "Of course we make a living from it, but at its core, it's about bringing joy to people." 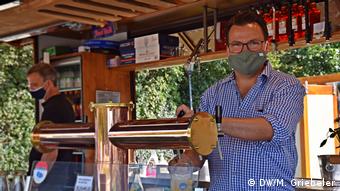 This is especially evident here on Königsplatz, which has become a small Instagram hotspot: A Ferris wheel turns in front of the gate. In Wiesn style, children squeal as they spin around on the chairoplane and the pirate-themed roller coaster, and adults enjoy a cool lager in the beer garden.

Gerhard, from Munich, came by with his family rather by chance — and stayed.

"You cannot replace the Oktoberfest: Meeting friends, drinking beer, the whole feeling," he says. "But I think it's good that something like this is offered here." He then waves to his wife and daughter, who are just passing by on the carousel. 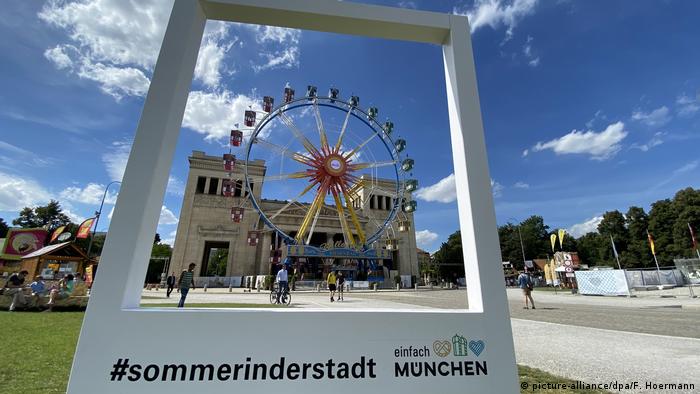 City and traveling traders are pleased

This is also what the innkeepers are hoping for. Because they, too, have a plan to save their season: In the period in which the Oktoberfest was originally supposed to take place — from September 19 to October 4 — this year the "Wirtshaus-Wiesn" (Wiesn Tavern) will be held. "The Wiesn is not a place, but an attitude to life," Gregor Lemke, spokesman for Munich's city city-center innkeepers, tells DW.

The 'Wiesn' in 2020: Returning to the roots of Oktoberfest

Therefore, it is not a replacement but rather a return to its origins: The first Oktoberfest, in 1810, for the royal wedding of Ludwig of Bavaria with Therese, was a late summer festival held throughout the city. In the evening people met in the taverns to dance and celebrate. And this is how it should be again now. "It's all about demonstrating: Have fun in life, have fun together — the coronavirus can't take that away," says Lemke.

There are 54 establishments taking part — the taverns in the city center and those that usually serve drinks at the Oktoberfest. On offer will be the traditional "Wiesnbier" from respective breweries, chicken, knuckle of pork and Steckerlfisch, grilled fish on a stick.

Oktoberfest bands will perform and guests are expected to appear in traditional attire. The festival weeks will also open with the traditional tapping of the first beer barrel with the exclamation: "O'zapft is". This will mark the start a citywide beer-based party. 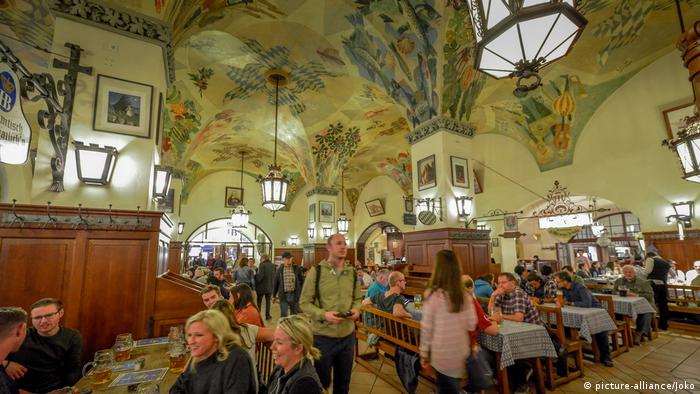 Munich's Hofbräuhaus will also take part in the Wirtshaus-Wiesn

Swaying to the music is ok, but no dancing

Everybody is invited. "The festival is open to the whole world," says Lemke — but he and his colleagues assume that because of the coronavirus it will mainly attract guests from Munich or Bavaria. So, it will be less international and probably less exuberant than in the Oktoberfest tents that hold up to 10,000 seats.

The taverns must adhere to the current distancing and hygiene rules. Swaying to the music will be allowed, but not dancing on the tables. And after all, it is not about crazy partying but rather tradition, Lemke emphasizes. "The Oktoberfest is unique in itself and should remain so."

Everyone is hoping for the return of the Oktoberfest next year

Should the "Wirtshaus-Wiesn" be a success, there could be a repeat in 2021, alongside the real Oktoberfest or Wiesn. This also applies to the "Summer in the City" program, economic expert Baumgärtner said. That's because everyone is hoping that by then there should be some medication or a vaccination for the coronavirus.

Only one thing will be taken out of the picture: the palm beach on the Theresienwiese — as that's where there will be the first major construction site in preparation of the big Oktoberfest party.

Travel to Germany is currently not possible because of the coronavirus restrictions. So let us show you, virtually, the German federal states. This time we are heading to Bavaria.

Germany A to Z: Munich

We are taking a tour through Germany and every week we'll introduce you to a new town, guided by the alphabet. This time M takes us to Munich — the Bavarian state capital offers much more than just beer and Lederhosen.