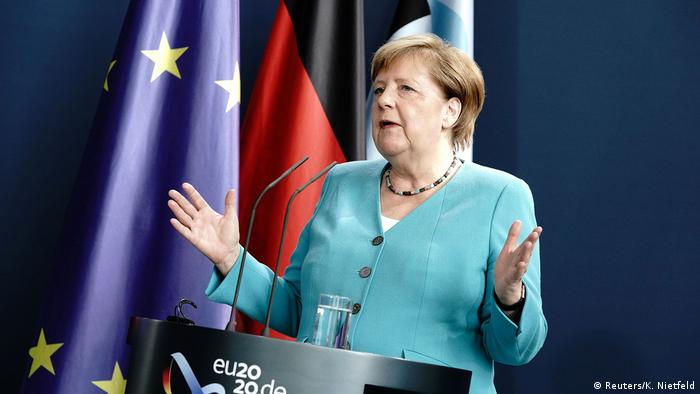 German Chancellor Angela Merkel and President of the European Commission Ursula von der Leyen on Thursday called for a speedy agreement on the coronavirus recovery fund for the European Union.

The two Germans held a joint virtual press conference where they outlined the goals for Germany's six-month presidency of the EU, which Germany officially took over on Wednesday.

"Every day we lose will see people losing their jobs, companies going bust, the weakening of our economy. Every single day counts," she said, calling for urgency on the agreement.

The EU is currently in negotiations over an economic stimulus and investment program worth €750 billion to be controversially financed through shared debts.

Von der Leyen said talks in recent weeks had shown there was common ground in many aspects, but that the details were proving difficult.

The heads of state and government of the Member States will discuss the plan on July 17 and July 18, but wide gulfs remain on the volume, financing and type of aid to be distributed.

Merkel said: "I am going to Brussels on July 17 with the will to strike an agreement."

She said the even if the talks were inconclusive, "there must be an agreement in the course of the summer anyway, I can't imagine any other option."

Von der Leyen's plan, which Merkel has thrown her support behind, will mainly come in the form of grants for countries hit hardest by the pandemic such as Italy and Spain.

Merkel stressed that it was important that the response to the crisis was "designed in such a way that it was robust."

Brexit trade deal 'not at any price'

On Brexit, Merkel said Europe wanted a trade deal with the UK, but "not at any price."

She said the EU must be prepared for a no-deal outcome.

If the two parties fail to secure an agreement by December or an extension, their trade relationship will return to World Trade Organization defaults with high tariffs and major business disruptions.

In response to question from DW's Berndt Riegert on whether the the other 26 EU Member States would be worried that the bloc was becoming too German, with both Merkel and von der Leyen at the helm, the two said that being a European is more important than being a national citizen.

Merkel said: "I think if there are two convinced Europeans, then maybe that is even more important. Of course I will not forget my German interests, which we have to bring to the negotiations. But we already know that the presidency is giving us an additional responsibility."

"I also always remark that this is the beautiful thing about Europe, when you consider that both of us have a very different bibliography, where we spent our childhood and where we grew up, but we are both deeply convinced and we are both deeply European. And that actually reflects the beauty of Europe."

An international summit has raised billions for the fight against the coronavirus, with a star-studded concert afterward. The campaign behind the events stresses the importance of world unity in overcoming the crisis. (27.06.2020)