Germany sets winter gas levy amid warnings of its impact 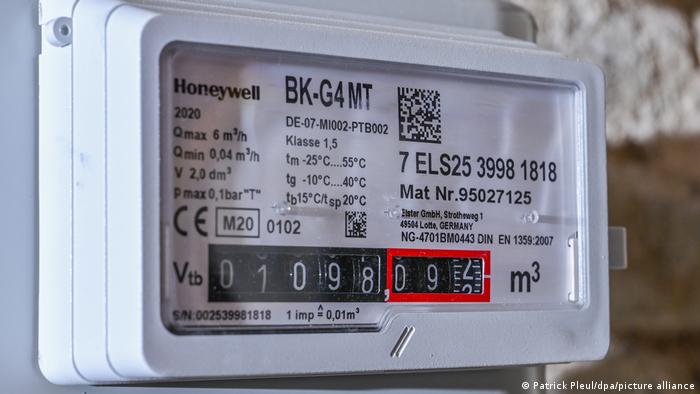 Just under half of Germany's households are heated using gas

A winter gas surcharge, which will come into effect in October for German households and businesses, was set at 2.4 euro cents per kilowatt hour on Monday.

Gas prices have been driven up in no small part because of Russia's invasion of Ukraine, prompting market concerns about energy security and also shortfalls in deliveries in some cases.

So far, consumers have been largely shielded from the increases, with companies unable to pass on their increased costs, but that is about to change.

"It will get more expensive — there is no getting around that. Energy prices continue to rise. But: we are already unburdening citizens to the tune of €30 billion," Chancellor Olaf Scholz said on Twitter on Monday, soon after the announcement. "And we are working on a further relief package. We will leave nobody alone with these increased costs."

The decision on the amount of the levy fell to the company charged with overseeing and coordinating the German gas market, Trading Hub Europe.

The stated aim of the levy is to cover around 90% of the additional costs incurred by gas providers who are now paying higher prices to secure gas, in some cases from new sources other than Russia.

Just under half of German households are heated using gas, the most popular method by far in the country.

German dependence on Russian gas has become notorious this year amid the war in Ukraine, both for household power and for industry.

Finance Minister Christian Lindner has already said he aims to soften the blow by appealing in Brussels for the right to waive sales tax on the new gas levy. Doing this would require the green light from the EU.

"That will make a difference for people," Lindner said.

The head of the German Association of Energy and Water Industries, Kerstin Andreae, argued that this did not go far enough. She told public broadcaster ARD it would be better to try to secure the reduced sales tax rate of 7% for all gas payments, saying that relief for consumers was "essential."

Economy Minister Robert Habeck said on Monday after the announcement that if the plan to a sales tax exemption falters in Brussels, "we will come up with fitting mechanisms to balance this out." Habeck called the levy a "bitter medicine," but said that by imposing it, "we are securing supply in Germany."

"The levy must and will be accompanied by a further relief package," Habeck said, in comments mirroring Scholz's, particularly for low-income households liable to be hit hardest. Governnment spokeswoman Christiane Hoffmann told reporters in Berlin that by the time the levy came into effect on October 1, such measures would "be prepared."

For a four-person household, the increase should mean an additional roughly €480 per year, excluding sales tax.

Industries rush to call for help

German businesses and trade unions quickly warned of the potential impacts on their operations.

"The federal government must usher in a further relief package to protect people from energy poverty," the chairman of major trade union Verdi, Frank Werneke, said in a statement. "Fiddling with income tax thresholds is no solution for this. Much more, we need rapid and effective relief particularly for people on low or medium incomes."

The president of the German steelmakers' association, Hans Jürgen Kerkhoff, said on Monday that the levy would cost  the German steel industry in the region of €500 million a year. He also said the industry would already incur costs of €7 billion because of rising prices for energy, even before the levy. Germany's steel industry uses roughly 2 billion cubic meters of natural gas each year.

The German federation of chemicals industries called the decision "an extremely bitter pill" in a statement, calling on the government to subsidize the extra costs to limit the impact.

The VDMA group of mechanical engineering companies said that the levy, coupled with gas prices expected to climb further, and concern among customers could conspire to put businesses at risk.

"Increasingly out members are confronted with suppliers who consider new [gas] contracts to be so risky, that they are not making any tenders at all, or only offers with a minimum duration," the VDMA's Thilo Brodtmann said.

Fairness and effect on inflation questioned

Business-focused newspaper Handelsblatt on Monday featured a study from an economic institute with close ties to German trade unions. According to the Institute for Macroeconomics and Cyclical Analysis, the gas levy could end up accelerating inflation rates by as much as 2%, bringing them closer to 10%.

"Coupled with the expiry of the 9-euro [public transport] ticket and the discount at filling stations, this could push the inflation rate over 9% in October and November. It's an enormous reduction in purchasing power for consumers," Krämer told Reuters news agency.

Germany, like many western economies, is facing its first period of rapid inflation in decades, with the most recent figures showing a slight dip to 7.5% year-on-year in July.

A leading member of Germany's socialist Left Party, Dietmar Bartsch, railed against the plan in a Monday newspaper interview. Bartsch called the levy an "impoverishment program for many people," and argued that the government should cover any additional costs with the "rapidly rising sales tax revenues." He also called for a bid to cover the increased costs in what he considered a more equitable manner.

"It is irresponsible of the government that no effort is made to check what financial situation the consumers are in, instead approving this blanket levy for everybody," Bartsch told the RND network of newspapers.

Germany to turn down heating to save energy

Is the energy crisis the final nail in Germany's export-dependent economic model?

Gas shortage: Will heating become a luxury in Germany?

The EU wants to reduce its gas consumption by at least 15%. Germany will probably have to save even more. How is that supposed to work?