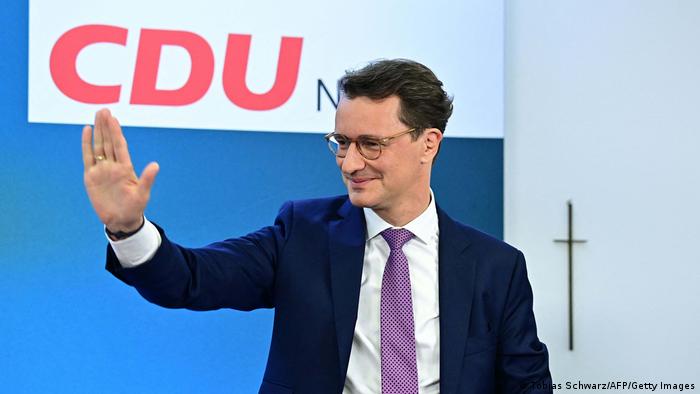 Preliminary results showed the party of former chancellor Angela Merkel receiving 35.7% of the vote to 27% of the second-place center-left Social Democrats (SPD).

Around 13 million people were eligible to vote, making it the biggest election in Germany this year and one of the most important outside of the general election.

The state is home to major cities Cologne, Bonn, Düsseldorf, Essen and Dortmund, and the result is seen as a key indicator of the political mood in Germany.

The current state premier Hendrik Wüst, from the CDU, took over the position from Armin Laschet last year after the former stepped down following his failed attempt to replace the outgoing Angela Merkel as German chancellor in last year's election.

He said his party had the mandate to lead a government in the state.

"The voters in North Rhine-Westphalia have made a clear decision. We, the @CDUNRW_de, clearly won the election!" Wüst said on Twitter.

The victory will be seen as an important boost for the CDU, relegated to the opposition in last year's election after 16 years in power under Merkel and now led by Friedrich Merz. "The CDU is back," Merz said on Sunday, hailing an "outstanding" result for Wüst but also a "test of the mood" at the national level.

They had been ruling NRW in coalition with the business-focused Free Democrats (FDP), but that coalition is no longer viable.

This could end up making the left-leaning Greens, with 18.1% of the vote, the kingmakers. The Greens achieved their best national result last September which left them as minority partners in the national-level ruling coalition along with the SPD and the FDP.

Greens co-leader Ricarda Lang said they want to push through climate-friendly policies in the state, and will go into a coalition with the party that would pave the way for that.

Thomas Kutschaty, the SPD candidate, said the results were below expectations, but said the SPD was open to talks with all democratic parties on building a government.

An alliance between the SPD, Greens and the FDP, mirroring the one governing at the national level would be possible in NRW.

CDU has tried to recover from its big defeat in last year's general election by gaining ground in regional governments. Just last week, voters in the northern state of Schleswig-Holstein delivered a landslide victory to the CDU. In late March, however, the small state of Saarland gave the SPD a landslide win, ending years of the grand coalition of SPD and CDU.

Correction, May 16, 2022: A previous version of this article had the wrong date for the beginning of Hendrik Wüst's term as state premier. He took over the office in October 2021. The article also previously said that the general election was in December, but it was in fact in September. This has now been corrected. We apologize for the error.