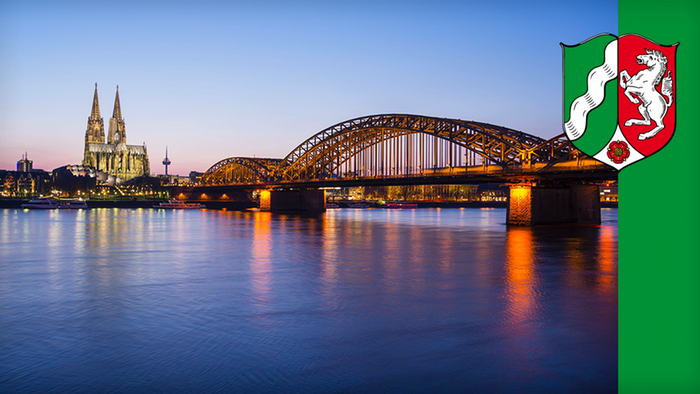 Located in the far west of Germany, North Rhine-Westphalia is the country's most populous state, contributing the greatest share to the national economy — even though its once mighty coal and steel industries are now history. From unique natural sites to historic landmarks, this German state has plenty to discover.

Just as Cologne would be unthinkable without its cathedral, the Zollverein Coal Mine Industrial Complex is an integral part of Essen. Its striking, winding tower is the landmark and symbol of the coal mining legacy in the region. In the past, three million tons of coal were mined here every year. Today, cultural events and concerts are staged at this former industrial site.

Most North Rhine-Westphalia residents do not live in the state capital of Düsseldorf, but in Cologne. Its inhabitants are considered especially affable, cosmopolitan and tolerant. JoinCheck-in presenter Lukas Stege as he explores Cologne's way of life.

Before the coronavirus pandemic, Check-in presenter Nicole Frölich traveled to Düsseldorf to find out what sets it apart from Cologne. In fact, the city offers many unique aspects that make it worth a visit. Check out the episode and join Nicole as she visits the city's Japanese community, embarks on a unique shopping trip and treats herself to a famous Altbier lager.

Düsseldorf: City on the Rhine

The cycling city of Münster

The greenery of Westphalia contrasts with the densely populated, urban Rhineland area. The former is where Germany's bicycling capital, Münster, lies. Cycling is an integral part of life in this university town — and not just for students. Join Check-in host Lukas Stege as he goes for a cycle ride through this lovely city.

Wuppertal, a city in transition

Around 150 years ago, Wuppertal was an epicenter of the textile industry. But by the 1970s the industry crashed and the city was forced to reinvent itself. Join Check-in host Lukas Stege as he explores all that Wuppertal has to offer, including the unique suspension railway.

There are certainly bigger metropolises on the Rhine river than Bonn, yet few are as unique. Not only was it the German capital for decades after World War II, it's also the birthplace of a musical genius: Ludwig van Beethoven.

Born in 1770, the influential classical music composer lived in the city for 22 years. Bonn has now become a place of remembrance for its famous son and even holds an annual Beethovenfest, a musical celebration dedicated to the composer. Check-in presenter Lukas Stege traced Beethoven's life in Bonn in a segment that was filmed before the coronavirus pandemic.

The rococo Augustusburg and Falkenlust castles in Brühl are among the most important palaces of the 18th century. Join us on this tour of the UNESCO World Heritage site from a drone’s perspective.

In the far west, on the border with the Netherlands and Belgium, lies the old royal city of Aachen. This is where Germany's first UNESCO World Heritage site, the Aachen Cathedral, stands. It's part of the imperial palace built for king Charlemagne in the late 8th century. It also has a further royal significance: for years, it was a prestigious location where German kings were crowned.

A Highlight in our 360-degree video

One of Germany's most popular theme parks is also located in North Rhine-Westphalia. At the Phantasialand in Brühl, near Cologne, visitors can easily pass a day in leisure and have the chance to take a ride on Germany's steepest log flume.

Use the mouse on your computer or your finger on your smartphone to choose what you want to see. Click on the video and drag the image sections wherever you want. If you are using a PC, use Google Chrome or Mozilla Firefox as a browser. If you have VR glasses, you can even watch the video in virtual reality.

The wild side of the Eifel region

Germany’s Eifel region is one of a kind, boasting unique natural features, including geysers and deep craters. Join Check-in presenter Nicole Frölich as she discovers this breathtaking landscape in the state’s far west, hiking through Eifel National Park and meeting a fisherman from Lake Laach.

A Trip to the Eifel