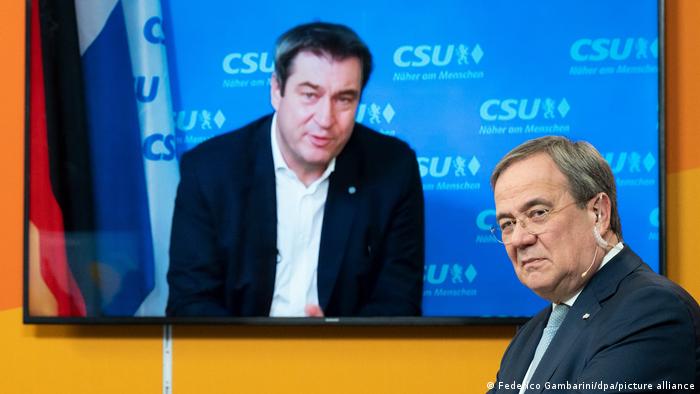 Only a minority of Germans back Armin Laschet as the conservative candidate to succeed Angela Merkel in elections later this year, according to a new poll published on Sunday.

Despite taking the reins of the CDU, only 12.1% of Germans think he should become the conservative candidate, according to a survey by pollster Civey.

The poll, which was carried out for the Munich-based Focus magazine, showed that 43% of Germans would prefer Markus Söder, Bavaria's premier who also chairs the southern state's Christian Social Union (CSU) party.

Söder himself has not yet declared whether he will run for Germany's top office, but he and Merkel staged a widely photographed Bavarian boat outing last July. The trip was viewed by analysts as a nod to Söder as a potential successor.

Third-placed on 8.7% in the Civey poll was Health Minister Jens Spahn, a Laschet ally who did not run for the CDU chair.

Ahead of the CDU's vote to pick a new leader, a survey done for public broadcaster ZDF and published Friday had put Merz and Röttgen both on chancellor suitability ratings of 29% and Laschet on 28%.

Instead, 54% favored Söder and 45% Scholz as suitable chancellor candidates for September among the 1,262 respondents sampled by the Mannheim polling agency Wahlen.

The race to succeed Merkel

Ultimately who runs as top conservative against the Social Democrats' (SPD) candidate, Finance Minister Olaf Scholz, and an as yet unnamed Greens candidate, goes back to a 1949 electorate-separation deal between CDU and CSU not to poach each others' conservative votes and to maintain a combined CDU/CSU, or "Union," conservative bloc in parliament.

Only once was it seriously challenged — in 1980 by Bavarian arch-conservative Franz Josef Strauss, whose chancellery-bid defeat, was followed by the rise of the CDU's Helmut Kohl.

Should Söder actually run for chancellor, it would the third bid for the post by the CSU. In 2002, former Bavarian premier Edmund Stoiber ran for the CDU-CSU conservatives but lost against incumbent SPD Chancellor Gerhard Schröder.

The two-term Schröder was subsequently defeated in 2005 by Merkel, who went on to govern for 15 years.

Merkel's CDU/CSU bloc are currently topping the polls, with recent surveys putting support for the conservatives between 35 and 37%. Their governing coalition partners, the SPD, have been polling between 14 to 16%.

Germany's opposition Greens, currently polling between 18 and 20%, plan to decide after Easter who will lead them into that election. The party is expected to tap one of its co-leaders, Annalena Baerbock or Robert Habeck.

Currently on opposition benches at about 8% are the Left party, with the far-right Alternative for Germany (AFD) between 8 and 10%, and the business-friendly Free Democrats (FDP) between 7.5 and 5%.