Germany battles one of the toughest pandemic stages — health minister

It will take months for the benefits of the vaccination drive to kick in for Germany as a whole, according to Health Minister Jens Spahn. He warned the lockdown would need to be extended into February and perhaps beyond. 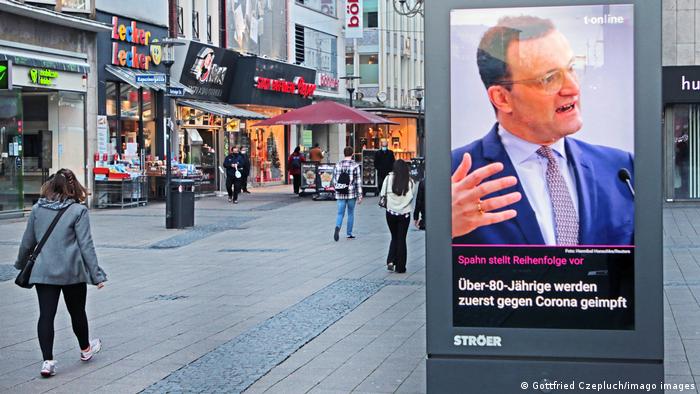 Germany is going through "one of the hardest phases of the pandemic," Health Minister Jens Spahn said on Wednesday while giving a speech to the members of the German Bundestag.

"The numbers of infections and deaths are still too high and we need to reduce them," he told lawmakers.

More than 750,000 people have been vaccinated against COVID-19 in Germany since the inoculation campaign started at the end of December. Spahn acknowledged there were some "bumps in the road during the biggest vaccination drive in history."

However, he pledged that the situation would improve, noting that the necessary structure was now in place. By summer, the government expects to be able to offer a vaccination to everybody, the minister said.

Large-scale benefits of the vaccination drive still months away

Speaking in a German radio interview earlier on Wednesday, Spahn said it would not be possible to relax all restrictions aimed at fighting the COVID-19 pandemic next month.

"One thing is already evident: It will not be possible to loosen all restrictions on Feb. 1," Spahn told Deutschlandfunk.

He added that it would take another two or three months for the effects of a vaccination campaign to kick in.

A particular test, Spahn said, was the emergence of new, more infectious variants of the SARS-CoV-2 virus that causes the disease, one from the United Kingdom and another from South Africa.

"That means that we must do everything we can to make sure that this virus is brought into Germany and continental Europe as little as possible," he said.

In the interview, Spahn also ruled out the idea of making vaccination mandatory for care staff, for instance in homes for the elderly or hospitals. That idea had been floated by Bavarian state Premier Markus Söder, who said it should be considered by the German Ethics Council.

Instead, Spahn said it would be preferable to address the concerns of health and social care employees and persuade them to take the vaccine without the element of compulsion.