Germany hunts for attacker after IS claims truck rampage

Police have launched a manhunt for one or more perpetrators of the attack in Berlin after reportedly releasing a second suspect. Media reports say Tunisian identity papers were found in the truck used in Monday's attack. 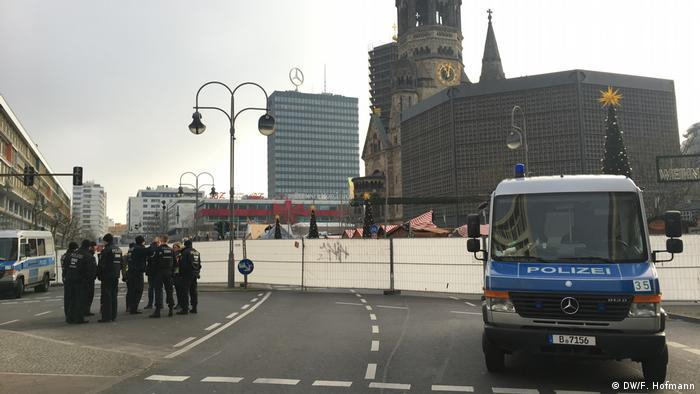 German police on Wednesday intensified a manhunt for the driver of a truck that plowed into a Berlin Christmas market on Monday evening, in an attack claimed by the so-called "Islamic State" (IS).

Federal prosecutors late Tuesday released a 23-year-old Pakistani asylum-seeker, after finding insufficient evidence that he was involved in the attack. German broadcaster RBB reported on Wednesday that police had taken in a second person for questioning early on Wednesday morning but later released him. The broadcaster also said police were able to recover DNA evidence from inside the truck that is thought to belong to the attacker.

Without naming sources, media reported the man was named either Ahmed or Anis A. and is thought to be using various aliases.

Authorities said one or more fugitives were likely armed and dangerous. "We may have a dangerous criminal in the area," Berlin's police chief Klaus Kandt said.

The attack on a Christmas market in central Berlin killed 12 people and wounded nearly 50, of whom 24 have been released from the hospital.

President Joachim Gauck on Wednesday morning visited victims of "the attack who were still being treated at the Charite hospital.

"We will not leave you alone in your suffering," he said.

The Pakistani asylum-seeker was apprehended on Monday after witnesses reportedly saw him jumping out of the truck and fleeing the scene. He was released after denying any involvement during intensive questioning. The investigation into the man found there was no video footage of him in the cabin of the truck.

Andre Schulz, chairman of the Federation of German Detectives, told public broadcaster ZDF on Tuesday evening there was a good chance authorities would quickly capture a new suspect. "I am relatively confident that we will have a new suspect by morning or in the near future," he said.

Berlin after the attack

Berlin: A day after the attack

IS on Tuesday claimed responsibility for the attack on the group's Amaq news agency. It said the unnamed attacker was "targeting citizens of the Crusader coalition," a reference to the German military's involvement in the international anti-IS coalition targeting the group in Syria and Iraq. However, there was no evidence to back up the claim. The terror outfit has been known to claim attacks it did not carry out and usually names its attackers.

German Chancellor Angela Merkel, who visited the scene of the attack on Tuesday afternoon, also referred to the incident as a "terrorist act."

A memorial service attended by all faiths was held on Tuesday evening at the Kaiser Wilhelm Memorial Church, near the site of the attack. Mourners laid flowers, lit candles and wrote messages.

Among those in attendance at the memorial were Merkel, President Joachim Gauck and Berlin Mayor Michael Müller.

Berlin's mayor said citizens would not let the attack sow divisions in the multicultural city. "We will not let cosmopolitan Berlin be taken by such a cowardly attack, by fear and terror," Müller said.

The terrorist attack, one of biggest to hit Germany in more than a decade, comes after Germany has taken in more than 1 million refugees over the past two years, raising questions by some over the country's ability to integrate such a large number of newcomers. The influx has sparked security concerns and forced the government to heighten security measures ahead of federal elections in 2017, in which Merkel's immigration policies are expected to be a central issue.

Speaking before the prosecutors admitted they had captured the wrong man, Merkel acknowledged that the crime might have been committed by an asylum-seeker.

"I know that it would be particularly hard for us all to bear if it were confirmed that a person committed this act who asked for protection and asylum in Germany," she said in a nationally televised statement.

"This would be particularly sickening for the many, many Germans who work to help refugees every day and for the many people who really need our help and are making an effort to integrate in our country."

German authorities have foiled several attacks recently and arrested dozens of alleged Islamists. In early October, a Syrian refugee was detained for allegedly planning to bomb a Berlin airport. The suspect, Jaber Albakr, later killed himself while in custody.

In July, a suspected 17-year-old Afghan refugee wielding an ax and knife wounded five people on a train in Bavaria before being shot dead by police. The attack was claimed by IS. Days later, a Syrian asylum- seeker claiming to act in the name of IS blew himself up at a festival in the southern city of Ansbach, wounding 15 people.

Around the same time, an 18-year-old German-Iranian gunman killed nine people at a shopping mall in Munich before committing suicide. Authorities said the young man, who had planned the attack for a year, was "obsessed" with mass murders and had no links to the IS group.

Earlier this month, a 12-year-old was arrested for allegedly assembling a homemade nail bomb he tried to explode at a Christmas market in the western city of Ludwigshafen.

Police, journalists and onlookers were scattered around the damaged Christmas market the day after the terrorist attack. DW's Ben Knight joined them. (20.12.2016)

The so-called "Islamic State" militant organization has claimed responsibility for the deadly attack at a Berlin Christmas market on Monday. Officials have warned that the perpetrator could still be on the loose. (20.12.2016)

Usually a place of joy and reflection, Breitscheidplatz in the heart of Berlin became the site of a tragedy Monday night as 12 people were killed when a semi-truck rammed into people at the Christmas market. (20.12.2016)