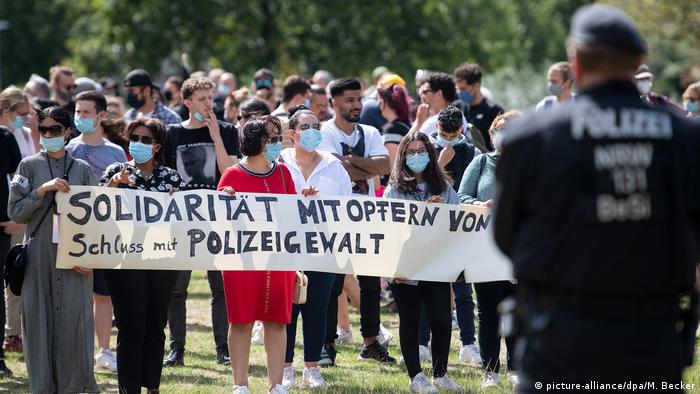 Hundreds of people joined rallies in the cities of Hamburg and Düsseldorf on Saturday to protest against police violence in Germany.

The demonstrations followed controversial police operations in both cities that were caught on film and widely shared on social media, sparking outrage.

In the western city of Düsseldorf last week, a policeman was captured on video placing his knee on a suspect's neck in what many said was reminiscent of the murder of George Floyd in the US. The government of North Rhine-Westphalia called for an investigation into the incident.

In the northern port of Hamburg, a video showed several police officers descending on a teenager who was allegedly riding an e-scooter on the pavement. Critics called the officers' response excessive and abusive. The police union defended their actions, saying the footage was being used to cast police in a negative light.

Some 300 people attended Saturday's rally in Düsseldorf, while around 250 gathered in Hamburg. Protesters carried banners reading "we condemn all forms of police violence" and pledging "solidarity at all times."

The demonstrations were organized by several left-wing groups and anti-racist civic organizations. The mother of the 15-year-old that was involved in the Hamburg incident is said to have attended the rally.

Both police videos come in the wake of the Black Lives Matter protests in Germany this summer, which put a spotlight on police violence and racial profiling.

Increasingly, tensions between young people and the police in major cities have also come into focus. In late June, riots broke out in Stuttgart in response to police drug checks in the city center. Unrest also erupted in Frankfurt in July, leading to dozens of arrests.

This week, a survey carried out by Germany's dpa news agency found that federal and state interior ministers had reported that at least 40 new cases of alleged extremism, mostly right-wing, were found among police in the first half of 2020.