Germany: Stuttgart reckons with youth ′rage′ after riots rock city | Germany | News and in-depth reporting from Berlin and beyond | DW | 22.06.2020

The city, home to Mercedes Benz, has begun cleaning up after a night of "unprecedented" violence. The unrest has residents, and some of the youths who were present, left wondering: How did things get so out of hand? 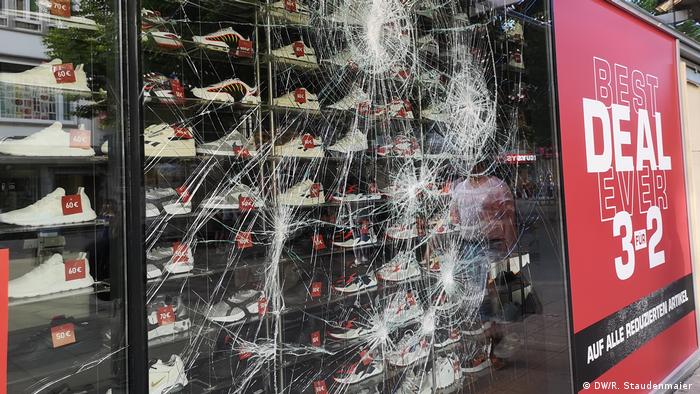 "We were listening to music, some were dancing and just having fun — and then it all escalated," Julia P. says, eyes wide in disbelief.

Like scores of others, the 17-year-old met up with friends on Saturday night at a park downtown in Stuttgart. She says she left earlier on in the evening, but quickly saw videos of what happened on SnapChat.

Now, standing in the city's Königstrasse shopping district, surrounded by boarded-up storefronts and scattered broken glass, it's hard to believe that a night of partying erupted into one of the worst riots that Stuttgart has seen in recent memory.

Anwar S., an 18-year-old who also witnessed the events unfold on Saturday night, says although there were tensions between the partiers and police, he couldn't understand why some of the rioters began damaging stores.

"They thought they were in an American movie — where anything goes."

Clashes between youths and police

The unrest erupted on Saturday night and early Sunday morning after police started carrying out drug checks at the city's main square, Schlossplatz.

Eyewitnesses told DW that everything escalated after a teen tried to run away from the police and officers chased him. At that moment, partiers from other groups stepped in "out of solidarity" with the teen and began attacking police.

Videos that circulated on social media showed rioters hurling cobble stones and other objects at police vehicles. In one video, a man runs at a police officer kneeling on the ground and kicks him in his side, knocking the officer down as others could be heard cheering him on. Nineteen officers were wounded in the violence.

The clashes spilled over into the shopping district, where rioters smashed storefronts. Several shops were looted, including a jewelry store, mobile phone shop, and sporting goods shop.

An estimated 500 people, many of them teens or young adults, were involved. Twenty-four suspects were eventually arrested.

By Sunday afternoon, much of the glass was gone or swept into piles in front of the damaged shops. Shattered windows have now been covered with wooden boards, many of which bear the scrawled words: "Create, don't destroy."

Many people who were out for a Sunday walk paused to take in what damage could still be seen — balancing an ice cream cone as they tried to snap a picture of the bulls-eye shaped crack at a local Vodafone store. 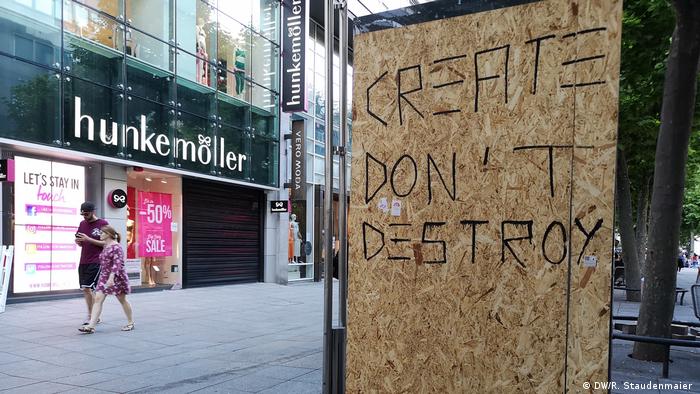 "These things don't happen in Stuttgart" was a frequent refrain from passersby, both young and old alike.

Authorities say the violence was not politically motivated, although alcohol likely played a large role, as well as attention that the unrest received on social media.

Yussef, a 19-year-old who witnessed the unrest on Saturday, says that a perfect storm of factors — including the fact that many people had been drinking — likely turned the normal evening into a powder keg.

"The rage just boiled over and got out of hand," he says.

When asked where the "rage" came from, Yussef explains that many of the young people involved in the clashes, particularly people of color, feel they're too often regarded as suspects by police.

The tensions have become particularly raw in light of the protests against police brutality that launched in the United States.

The coronavirus lockdowns and frustrations over the pandemic also likely played a role, he says.

"Everything was shut down," Yussef explains, gesturing to the now-bustling shopping street. Many were frustrated by the isolation, worried about their futures and happy to once again meet up in public with friends.

Authorities have now launched a massive investigation into the unrest, using evidence gathered from looted shops to identify those involved. But the question on everyone's mind in Stuttgart —"How did this get so out of hand?" — isn't going to be as easily cleared up.