Merkel and Tsipras discussed Greece's return to economic stability as well as immigration and Macedonia. Protests, banned in hopes of avoiding scenes similar to her last visit, were quelled by police using tear gas. 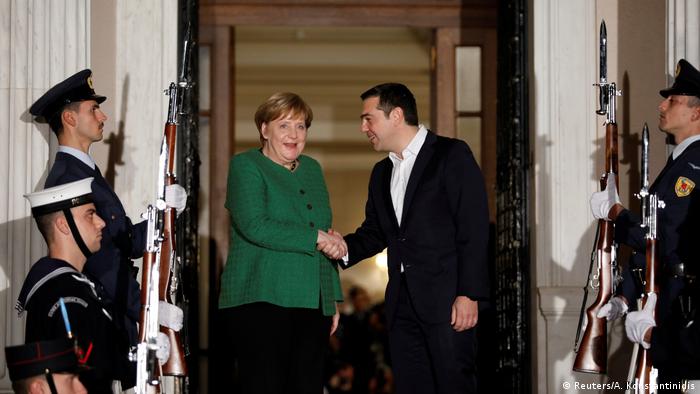 German Chancellor Angela Merkel traveled to Athens on Thursday to meet with Greek Prime Minister Alexis Tsipras, her first such trip in four years. Her 2014 visit was marred by massive protests, as many Greeks held her responsible for the hardships they endured as part of austerity measures imposed during the European debt crisis.

Speaking after their Thursday evening meeting, Greek Prime Minister Alexis Tsipras said: "The stereotypes of the lazy Greek and the strict German are over. We are entering a new era. Cooperation between Berlin and Athens will be decisively important in the coming years."

Asked if she thought Greece would return to the global financial market, Merkel replied, "Yes, of course, my visit and my work aim at helping Greece get back on its feet so that it can finance itself on the open market."

Germany was the biggest single lender in the Greek bailout at the time, and her government's demands of fiscal belt-tightening drew the ire of many Greek citizens, who took to the streets in droves to protest her policies.

In an effort to avoid a repeat of such scenes the Greek government has banned all protests and has deployed more than 2,000 police officers around the capital during the chancellor's visit.

On Thursday evening, however, police fired tear gas into a group of roughly 700 leftist protesters demonstrating against Merkel, in an effort to keep them from reaching government headquarters.

Merkel's two-day visit has been the focus of much media attention, with she and Tsipras giving pre-visit interviews and the landing of her airplane being broadcast live on Greek television. 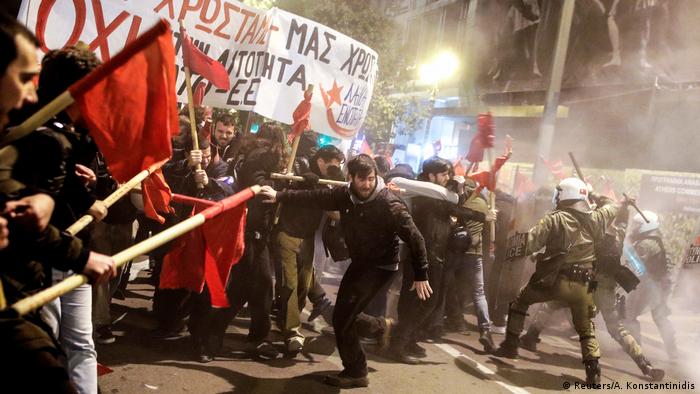 Despite a government ban on protests, a number of leftists faced off with police in an effort to reach government headquarters during Merkel's visit

Merkel, who sees Greece's rescue as a success for herself, praised the country's progress when she spoke with Tsipras in an informal televised chat before their official meetings began: "Difficult years have passed, but we have succeeded in strengthening the European spirit. The Greek people went through a very difficult phase and I would like to offer thanks for what Greece has achieved despite the financial difficulties and the tough [austerity] measures, and for what Greece is achieving even now."

Tsipras struck a much more conciliatory tone than the one he was famed for the last time Merkel was in Athens: "The last time you visited was at the height of the crisis. Now you are coming to a different Greece, which, after great difficulties, managed to overcome the [financial] crisis."

Tsipras did not lead the government during that last visit and was elected prime minister in 2015 on a hard anti-Merkel and anti-bailout platform. As prime minister, it has fallen upon Tsipras to push through a number of unpopular reforms.

The financial crisis and subsequent bailout have taken their toll on Greece, causing its economy to shrink by one quarter, its unemployment rate to swell and leading to tax hikes and cuts to salaries and pensions in return for foreign loans.

Although not entirely recovered, Greece's unemployment numbers have fallen substantially and the country has emerged from its third and final bailout. Nevertheless, it remains under scrutiny and has been forced to promise further reforms to ensure that it can remain economically viable.

The two leaders also discussed the pressing issue of immigration to Europe, in which Greece, along with Italy and Spain, is on the front line. Unlike Italy's staunch anti-immigrant government, Tsipras is largely in agreement with Merkel on immigration policy.

After the meeting, Merkel said that the EU must push forward with its current refugee agreement with Turkey. She noted the need to improve refugee camps in the eastern Aegean, as well as lamenting the fact that returns of refugees from Greece to Turkey were not going as quickly as originally hoped. The chancellor said, "We will work constructively with Greece to improve the situation."

Another issue of great importance to Tsipras, and even threatens to topple his government, is a dispute with neighboring Macedonia over its name. A current compromise agreement would see the former Yugoslav republic taking the name North Macedonia in exchange for Greece dropping opposition to Skopje joining NATO and the EU.

The issue has proven highly contentious among Greeks, and Tsipras' junior coalition partner, the Independent Greeks party, has threatened to leave if the prime minister signs off on the compromise. Critics say that Skopje's use of the name Macedonia infringes upon Greece's ancient heritage, as Greece already uses the name to identify its northern territories of the same name.

Although Merkel implored Greek politicians to accept the compromise, which she said would benefit all sides, she added, "I am not going to inject myself into the country's domestic politics."

The topic will also likely be discussed on Friday afternoon, when Merkel meets with conservative opposition leader Kyriakos Mitsotakis, who has opposed the move in an effort to win support from right-wing voters.

Since we are talking about debt …

Merkel is also scheduled to meet President Prokopis Pavlopoulos on Friday. He is expected to broach the issue of reparations stemming from World War II. Greece has repeatedly called for Germany to pay for damages suffered as a result of the war, which Greece has estimated to total at least €279 billion ($321 billion).

Germany, however, says that chapter of history ended with the Treaty on the Final Settlement with Respect to Germany resulting in German reunification in 1990. Speaking after Thursday evening's meeting, Tsipras said the issue was open as far as Athens was concerned.

In 2015, Angela Merkel opened Germany to hundreds of thousands of people fleeing war — sparking heated debate about asylum policy within the European Union. In Brussels, Bernd Riegert asks what lessons have been learned.

Turkey has irked the EU by prospecting for oil and gas in the region. The German chancellor says now is the time for dialog.