Freed from the strict orders of international creditors, Greece is now witnessing a financial recovery. But years of biting budget cuts have left the country scarred and many Greeks starving. Anthee Carassava reports. 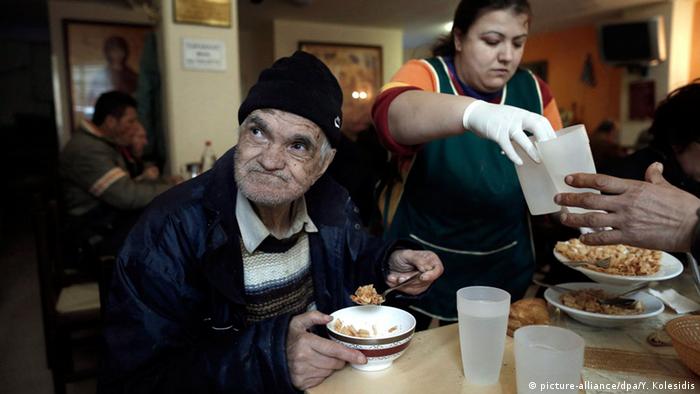 It's nearly noon and the main fish shop in the city of Marathon is empty.

"No one has set foot inside," says Maria Hasiotou, sitting and smoking by the till. "If they haven't come in so far, they probably won't come at all."

"It's probably another day of beans or pasta," she huffs, strutting to a sprawling stand in the front of her shop covering three containers of fresh fish, mainly sardines and sea breams.

Hardship in Greece is surfacing in ways that few would have ever foreseen. And, hunger and undernourishment are now part of that specter.

A study released recently by the Amsterdam-based Transnational Institute has sent shock waves across the country, showing that children have been hit hardest by the eight-year financial crisis that has wrecked Greece, leaving 25 percent of the working population here without a job.

That's four times more than before the onset of the crisis in 2009, when Greece's economy skid off the fiscal cliff , forcing the country to sign up to a string of international bailouts — the biggest and toughest in financial history.

As a result, about 14 percent of Greece's children remain malnourished, deprived of a meal including meat, chicken and fish every second day. The figure, according to the study, is double the amount counted ahead of the 2008 crisis.

"There are signs of hunger all over," says Giorgos Krikis, a pensioner in Marathon, a city some 42 kilometers (26 miles) northeast of the Greek capital and wrecked by the financial crisis. "Just the other day, I saw a longtime friend rummaging through the rubbish bin of a local supermarket, looking for scraps to bring home to his family."

"Who would have ever thought that this man, among the most successful in our community, would end up this way," Krikos told DW.

"I felt embarrassed. But if I had no other way of putting food on the table and feeding my children, I too would probably do the same."

With a quarter of Greece's children living in poverty, according to United Nations figures, parents here have been forced to depend on grandparents for handouts. But pensions have been cut 13 times since 2009, leaving families with dramatically less income, deprived of even the bare essentials. 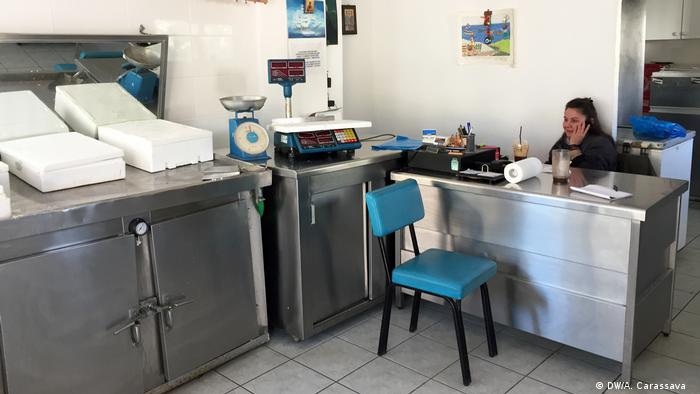 Maria Hasiotou sitting at the till in the main fish store in Marathon. She's desperately waiting for customers

According to the Transnational Institute report, 9 percent of children lack a daily, protein-based meal, up from around 4 percent recorded before Greece's economy went into free fall. Experts suspect the real figure is significantly higher. Ashamed to admit their deteriorating situation, many farming families have chosen to suffer in private for years.

"Many women in my neighborhood ask me to go to the local soup kitchen to collect some food for them because they are too embarrassed," says Stamatina Lepoula, a resident and shopkeeper in Marathon. "Greeks are hugely dignified people who have managed to cloak their suffering for years."

"But now," she says, "hunger is in the open. It's obvious everywhere you look. And worst yet, the trend is growing."

Fleets of malnourished children have already given the secret away as a flurry of nationwide reports has shown cases of pupils fainting in schools because of hunger. Teachers, in fact, have reported cases in which students have turned up at school eating nothing more than rice and stale rusks for months. Some children have been spotted picking through school trash bins, others asking playmates for their leftovers.

"They have lost count of the IOU notes that have piled up," Rakopoulos says. "But it's impossible to turn your back on a child who makes excuses every day to beg for food."

The country's powerful Greek Orthodox Church has stepped in along with aid groups to provide food collections and soup kitchens, serving around 60,000 people a day. But the politics of poverty have left wreckage in its wake and many families continue to suffer.

With their savings depleted, some have even been forced to leave their children at state shelters and care homes in bigger centers, visiting them two or three times a week because they can no longer tend to their basic needs.

Olivier de Schutter, former special rapporteur on the Right to Food at the United Nations and a member of the UN Committee on Economic, Social and Cultural Rights, has now suggested that the European Union could be held accountable for violating Greeks' right to food.

"The level of the damage could raise the EU liability but the problem is identifying those who have been affected directly by the austerity measures and who could take the case to court," he said. He noted that groups of Greeks were already considering lodging suit against a string of European institutions for punitive damages.

It is unlikely officials in Athens will back such action any time soon. Since the start of the Greek crisis, successive governments here have agreed to harsh austerity and fiscal retrenchment in exchange for multimillion-dollar loans that have kept the county afloat.

But even if it doesn't come off, claims of EU accountability could fuel a broader public debate not just in Greece, but the whole of the European Union.

Greece standing on its own two feet