Greece will exit its stability program on Monday. How has the Greek economy developed since austerity was imposed in 2010? And is Greece prepared to meet the budgetary targets? A data analysis provides answers. 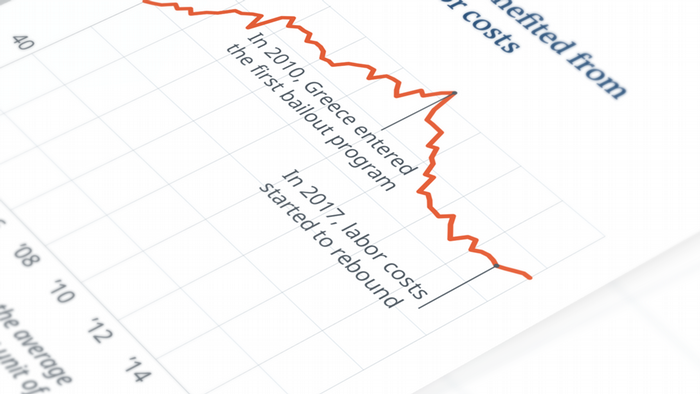 Read this article in German or Greek.

Greece's government debt is more than twice the EU28 average; the country's market value as measured by gross domestic product has decreased by a third since the crisis started; and one in five people are unemployed: At first glance, the situation doesn't give rise to optimism.

Traditionally, the service sector is the strongest contributor to Greece's GDP, followed by industry and agriculture. But Greece urgently needs new sources of income to avoid slipping back into recession after the third austerity program ends on August 20. Exports are a promising source of income: Despite some tough years, goods exports rose by 35.5 percent from 2010 to 2017, a welcome relief in Athens and Brussels.

With Greek exports slowly on the rise, the big question remains whether this development is sustainable and strong enough for the country to finance its debt repayments and meet strict commitments for its primary budget surplus. To answer this question, DW analyzed trade data from 2010 to 2018. The investigation shows that the idea of trade as a panacea comes with three caveats.

When the crisis hit hardest in 2010, labor costs were the highest they had been in at least a decade. They dropped markedly from this peak: "The fiscal restructuring that took place as part of the stability program with the EU reduced the cost of labor significantly," says George Pagoulatos, professor of European politics and economy at the Athens University of Economics and Business.

Greek exports benefited from rapidly decreasing labor costs, down by more than 30 percent since 2010, and they only rebounded marginally in 2017

What turned out to be beneficial for exporters came with a downside: Labor costs measure both wages and taxes paid to the state. Wages have decreased even more than labor costs as a whole, and Greek businesses now pay less for skilled workers.

Read more: How Greeks end up in sham foreign jobs

"The important thing is for productivity to rise so that wages can increase," Pagoulatos says. "During most of the crisis period, many of the gains in competitiveness from wage compression were canceled by other factors, such as the higher tax burden and social security costs, energy costs and cost of credit." This caused thousands of companies to either close up shop or transfer their operations to bases that were less tax-intensive, further weakening the economy.

With the economy set to regain strength, it is only a matter of time until wages rise and the continued economic feasibility of the exporters is put to the test.

Caveat 2: Exports are mainly driven by a single sector

The second caveat is the lack of diversity in exports. Comparing the volume of goods exported from January to May 2010 with the same period in 2018 shows that one sector stands out — and it's neither olive oil nor feta cheese. Refined petroleum and other mineral fuels account for a third of the total Greek exports for the first five months of 2018, far surpassing any other sector.

Contrary to common perception, both in total volume and the increase since 2010, manufactured goods rank above the export of agricultural products (food and livestock) that Greece is usually associated with

Experts such as Christina Sakellaridis, president of the Panhellenic Exporters Association, appear skeptical of petroleum exports: "Petroleum is a commodity, and its price fluctuates. We are not able to influence its course. ... If oil prices increase significantly, then the cost of internal production in Greece — and by extent the competitiveness of Greek products in the international markets — is affected."

Thus, Greece would be well-advised to diversify its exports. "Recently, new technology exports are on the rise, as well as products that incorporate high technical know-how and innovation, something very encouraging for us to see," Sakellaridis says.

Caveat 3: Greece lacks companies with the capability to boost exports

Konstantinos Bitsios, vice chairman of the Hellenic Federation of Enterprises, says Greece is indeed a significant manufacturer of industrial goods. The country has one of the highest shares of small and medium-size enterprises (SMEs) in the European Union. However, he says, a relative lack of larger companies prevents Greece from being able to "effectively compete in the international markets."

This leads to the third caveat: SMEs generally cannot tap in to the exporting business as easily as bigger companies can. "Productivity [of very small companies] is only around 50 percent of the EU average, while participation in international value chains also remains low," Bitsios says.

On top of that, the financing situation is difficult. During the crisis, businesses had hardly any access to finance. At the same time, banks gave out many loans that are not likely to be paid back: The volume of so-called nonperforming loans increased tenfold, from €11 billion in 2008 to €110 billion at their peak. Today, they stand at €94 billion. Because of this, banks are still unable to provide much financing and Greek companies, SMEs especially, are struggling to expand and finance further exports.

Bitsios calls the nonperforming loans "one of the crisis's lasting legacies" and warns that they "threaten to derail any growth prospects."

It's a big challenge, but is it too big?

All things considered, it is not surprising that, though Greek exports are on the rise, they remain relatively low as a percentage of GDP when compared with other EU nations.

Greece is almost at the bottom of the scale, above only the UK and Cyprus, both of which have strategically oriented themselves toward exporting services rather than goods.

Greece's exports in goods account for 18 percent of its GDP, way below the EU28 average of 33 percent. Other crisis-ridden countries, such as Portugal (30 percent) and Ireland (66 percent), do better

Greece has a chronic reliance on imports, forcing the state to constantly borrow capital from the financial markets to cover its negative trade balance, the difference between the value of imported and exported goods. Services such as tourism and shipping have, to a large extent, alleviated the massive deficit in the trade of goods. The trade deficit is now shrinking, mostly thanks to the reduced internal demand for imports, but also because of the ongoing increase in exports.

Taken together, although Greece has the capacity to be a solid exporter, structural weaknesses — the likely increase in labor costs, the not-yet-diversified exports, the lack of large enterprises interlinked with the lack of adequate financing options, and the absence of a national export strategy — make Greece's further recovery a fragile one.

Nevertheless, the country seems to be on the right track. Greece has to meet strict targets for its primary budget surplus (a measure of government finances that excludes debt repayments): 3.5 percent of GDP by 2023 and 2.2 percent by 2060, an ambitious commitment. According to its 2018 budget, the Greek government projects a primary budget surplus of 3.8 percent of GDP this year.

Greece will soon exit its international bailout, but does its economy offer fresh investors a level playing field? DW meets a Greek-German philanthropist trying to change things for the better. (28.05.2018)

Despite the data, little relief felt by ordinary Greeks

The soundings from Greek politicians have been positive ahead of an important meeting of EU finance ministers this Friday. It's a different story for struggling business people in the debt-saddled country, (26.04.2018)