Greece's young professionals and graduates are escaping economic hardship at a rate of over 100,000 per year, according to the Bank of Greece. They have gone to Germany, Britain and the United Arab Emirates. 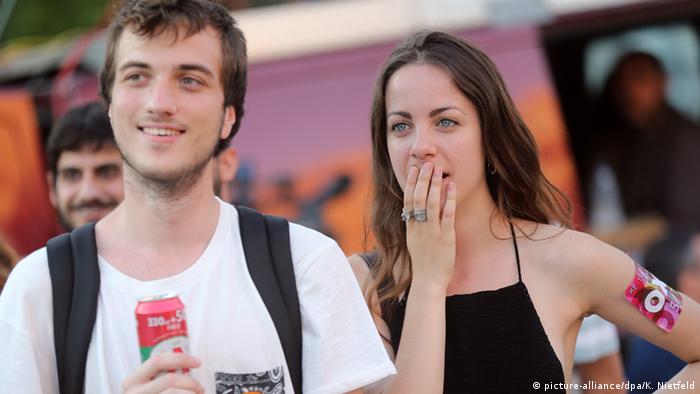 The Athens newspaper "Kathimerini" led Saturday with data from Greece's Central Bank (BoG) showing that 427,000 Greeks, mostly the young and educated, have emigrated since 2008.

The European Stability Mechanism (ESM) is providing Greece with billions of euros in fresh money after EU finance ministers finally agreed that the debt-laden country has made progress in bringing its finances in order. (17.06.2016)

Greece ranks third - after Cyprus and Spain - in terms of the proportion of young people leaving their home country, prompted by youth unemployment rates approaching 50 percent. Overall jobless rates are between 20 and 25 percent.

Kathimerini, citing the bank's report, said the exodus began "gradually" in 2008, a year before Greece's debt crisis brought hardship to the nation of nearly 11 million people.

"The current exodus is being led by young professionals seeking their fortunes in Germany, the UK and the United Arab Emirates (UAE), the report added.

Greece has a centuries' old history of emigration that has created a Greek "Diaspora" of at least three million around the world in locations as far afield as Sydney in Australia.

In the first exodus, between 1903 and 1917, Greeks traveled chiefly to the USA, Australia, Canada, Brazil and southeastern Africa, according to the report, which noted that seven in 10 were aged between 15 and 44 and fewer than two in 10 were women.

In the second wave, in 1960-72, seven out of 10 were young people aged 20-34, with five in 10 declaring themselves as manual workers. Six out of 10 traveled to Germany or Belgium to work in factories.

The author or the BoG report, economist Sofia Lazaretou told "Kathimerini" that it was "no coincidence that both phases took place following an intense period of recessionary upheaval."

It had "fueled the mass departure of people, chiefly young people, who were seeking new opportunities and prospects for progress," said Lazaretou.

Greece ranks fourth among the 28 EU member nations in terms of mass emigration in relation to each nation's work force, the newspaper said.

On Friday, the EU's Eurostat statistics agency said 21 million people were out of work in the 28-nation bloc, of whom 4.2 million were under the age of 25.

In percentage terms, unemployment EU-wide and between the ages of 15 and 74 years had remained unchanged at 8.6 percent. Youth rates, however, were far higher.

One of the lowest jobless rates for all age groups was in powerhouse Germany, at 4.2 percent. Last year, net emigration into Germany amounted to 382,000, with the majority from eastern EU member nations, such as Poland and Romania.

The survey by a Thessaloniki university conducted for the Greek television channel Skai put the opposition conservative New Democracy on 28.5 percent.

Greece says over 56,000 migrants from the Middle East and Africa remain in Greece since Balkan states shut their borders to a major refugee influx toward northern Europe in February.

Greece was forced in late 2009 to admit that it lacked public finances and has since received three bailouts from international creditors.