The neoliberal FDP has agreed to start formal coalition talks with the center-left SPD and the Greens. With all parties on board, they are a step closer to forming Germany's next government.

Representatives of the three parties wrapped up exploratory talks last week, but they required the official approval from all parties to go ahead with more formal discussions about the makeup of what will likely be Germany's next government.

The SPD emerged as the strongest party in the September election with around a quarter of the votes. But it needed the support of at least one other party to form a coalition government.

The so-called "traffic light" coalition (due to the parties' colors — red for the Social Democrats, yellow for the FDP and green for the Greens) was an early favorite with the Greens and FDP as the kingmaker parties.

No decisions yet on ministry positions

An exploratory paper presented Friday described how the three parties were committed to climate protection to bring Germany toward the goals of the 2015 Paris climate accord.

In addition, Germany's phaseout of coal, currently envisaged by 2038 at the latest, should "ideally" be brought forward to 2030, said the paper.

The business-focused FDP has been eyeing up the prestigious Finance Ministry — the spot currently held by would-be SPD chancellor Olaf Scholz. However, during these early talks it is not yet clear which parties would take which ministries.

The parties have discussed creating a new portfolio, the climate ministry, but SPD co-leader Norbert Walter-Borjans criticized FDP leader Christian Lindner for suggesting which party would hold it.

"We're not yet talking about how which ministry will be tailored," he told the TV channel RTL/ntv ahead of the FDP internal vote.

"I expect that we will do what we agreed to do: to talk about the content first," he said.

What have the parties agreed to so far?

Preliminary agreements reached during the exploratory talks included not raising taxes or increasing the amount of debt that the government can take on — both darling policies of the FDP.

The parties also agreed on raising the minimum wage to €12 ($13.90) per hour, as had been one of the campaign pledges from Social Democrats.

For the Greens, the main policy win was an accelerated ending of coal production, as well as a raft of other climate policies. However, they gave up their hotly contested plan to impose a speed limit on German highways.

In addition, the Greens want to create a climate task force during the first 100 days that will meet weekly to coordinate between the ministries and have a veto if new laws are not compatible with the Paris Agreement. 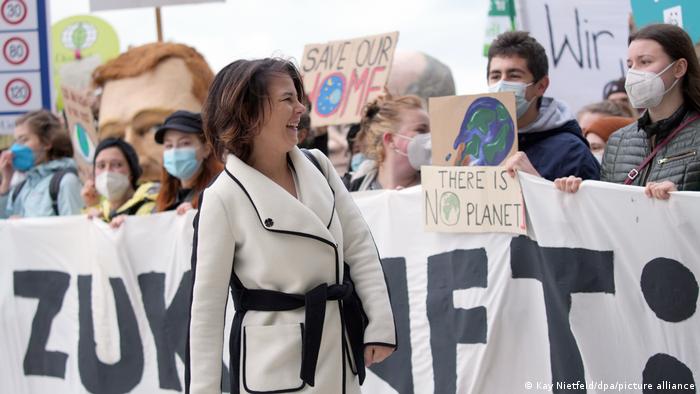 While the FDP could have their objections to some of the proposals from the Greens, its General Secretary said that alternatives to the traffic light coalition were now less likely.

"Failure is not an option," Wissing told regional public broadcaster NDR on Monday.