German government: What are the chances for a 'traffic light' coalition?

Less than a fortnight after the general election, Germany's Social Democrats, Free Democrats and Greens are holding exploratory talks to form a coalition. It would be the first such constellation — if it comes together. "The SPD and Greens have a program that is a burden on citizens and business. That doesn't work for us."

The statement, from the late Guido Westerwelle, then the leader of the neoliberal Free Democrats (FDP), was from nine days before Angela Merkel's Christian Democrats (CDU) beat the Social Democrats (SPD) in Germany's 2009 election. He led his party to its best result ever, which put him in the Foreign Ministry in Merkel's second government.

Much has changed since Merkel's conservative bloc of the CDU and the Bavarian Christian Social Union (CSU) and the FDP were in government together.

Now,the political pendulum has swung toward a "traffic light coalition" — named for the colors of the parties involved: red for the center-left Social Democrats (SPD), yellow for the FDP, and green for the environmentalist Greens.

But there are fundamental differences in the parties' platforms. The FDP is against the SPD and Greens' plan to raise taxes on the wealthiest to deal with the pandemic and the resulting national debt. At first glance, the liberals appear also at odds with their climate policy, which envisions a stronger government hand. The FDP wants market-driven solutions to the climate crisis.

It's on EU, foreign, and security policy that the three parties seem to be most aligned.

The potential coalition members agree on maintaining a strong partnership with the United States and NATO, including when it comes to confronting China, Russia, and Iran. Differences remain over certain points, such as the Nord Stream 2 gas pipeline between Russia and Germany.

Just how viable the three-way coalition could be is what the parties want to clarify from the start of their talks together.

FDP leader Christian Lindner has expressed the most skepticism and made it no secret that his party is more naturally aligned with the conservatives. However, he has said he is open to the possibility of a traffic light coalition. In pre-exploratory talks with the Greens, he seems to have made peace with his opponents, which he has long considered a "prohibition party."

What Scholz stands for

Talks have moved from bilateral to trilateral, bringing the SPD — and chancellor hopeful Olaf Scholz — on board. All eyes, including abroad, are on the struggle to put together Germany's first government without Merkel for the first time in nearly 16 years.

"From the perspective of European partners, Scholz presents a certain amount of continuity for the post-Merkel era and, with it, stability and reliability," Antonios Souris, a political scientist at Berlin's Free University, told DW.

Given the parties' pro-EU bent, Souris said, any modernization program for Germany could have a ripple effect across Europe.

"But how sustainable that could be is hugely dependent on the outcome of the presidential election in France next year," he said.

Germany and the G7

The election campaign's lack of focus on EU politics was due to the "many domestic issues," Souris added, which is likely to remain the case for the new government. However, Germany takes over the G7 leadership in 2022, which could change things.

"It will be interesting to see what the government will then focus on," he said.

Exploratory talks are just the first step toward negotiations. But there is precedent for a traffic light coalition at the state level, something Lindner's party colleague, Volker Wissing, knows well. Until May, he was the economy minister for the western German state of Rhineland-Palatinate. 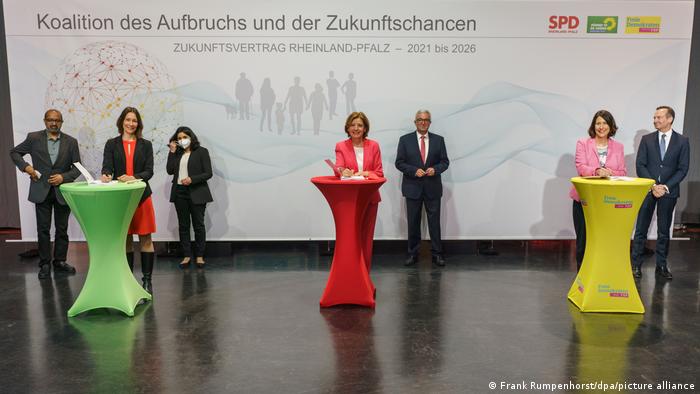 The traffic light arrangement there has worked so well under the leadership of the SPD's Malu Dreyer, that it was continued following state elections earlier this year. Wissing's experience in a traffic light, and his involvement now in negotiations at the federal level, could give talks a boost of confidence, Souris said.

The history of the traffic light is not positive everywhere. The city-state of Bremen, in northern Germany, had the first-ever such coalition — in 1991. The alliance broke down over a disagreement between the FDP and Greens regarding conservation efforts vs industrial development.

Efforts in other states over the years to forge a three-way alliance among these parties have failed even before the government was formed.

Souris explains Rhineland-Palatinate's luck: The SPD is the clear favorite party there, and Dreyer is popular.

"She has established a governing style that allows the parties to excel in their respective key issues," he said. 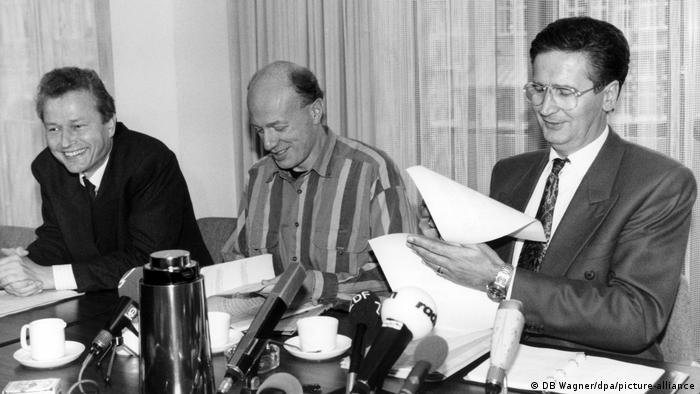 Germany's first traffic light coalition, in Bremen, collapsed before its term was up in 1991

Dreyer sees herself as a moderator within a governing team, Souris said, which possibly sets a good example for the federal level.

"Olaf Scholz will follow her style quite closely," he said.

So far, the conditions seem right for the three to find a way to work together. However, differences remain, which could lead to a "very thick coalition agreement with many details spelled out," he added.

Negotiations will require finding something that broadly unites the three parties; so far, those involved in talks have echoed words such as "reform" and "modernization." Souris said they would have to avoid the appearance that they are settling for the lowest common denominator to strike a deal and cobble together a government program.

"This will be up to the SPD and Scholz to find compromises that all those involved can present to their parties and voters," he said.

All Germans eligible to vote can also contest a national election result — and some do. DW tells you how it works.