It's the first time the three parties are meeting to discuss a possible coalition. While the Social Democrats are hopeful, there are still major hurdles to overcome before Angela Merkel's successor can be crowned. 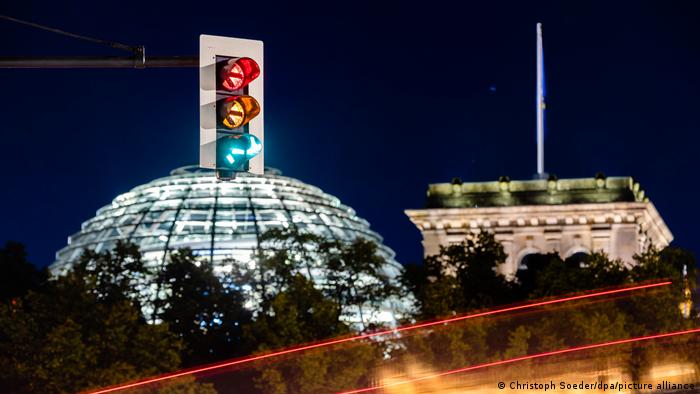 The so-called traffic light coalition is named after the respective colors of the SPD (red), FDP (yellow) and the Greens

Germany could be moving closer towards a new government, with the center-left Social Democrats (SPD), environmentalist Green Party, and the neoliberal Free Democrats (FDP) holding their first three-way talks to explore a possible coalition on Thursday.

Until now, the parties have held two-way talks to feel out the likelihood of an alliance, with the SPD's Olaf Scholz hoping to become Germany's next chancellor.

What is happening during today's talks?

Party leaders and high-level members of all three parties are gathering together in Berlin to figure out if they would like to enter coalition negotiations together.

SPD co-head Saskia Esken wrote on Twitter that she was "confident" the parties will be able to "find a good path forward."

Greens co-leader and the party's chancellor candidate, Annalena Baerbock, said it is imperative that coalition talks move quickly in order to address the urgency of the climate crisis.

"That's why it is so important to us to move forward swiftly and constructively," she told public radio Deutschlandfunk on Thursday morning.

The exploratory talks are expected to last around a week, Reuters reported, citing sources with knowledge of the negotiations.

The SPD and its chancellor candidate, current Finance Minister Olaf Scholz, received the most votes in Germany's federal election on September 26 — narrowly edging out the conservative CDU/CSU bloc, which has held the chancellery for the past 16 years under Angela Merkel.

The CDU's chancellor candidate, Armin Laschet, also proposed forming a government with the FDP and the Greens — despite a historically low result for the conservatives.

However, the two smaller parties have now taken a clear step towards the rival SPD.

What are the sticking points?

The largest political overlap is between the SPD and the Greens — particularly on social policy and the environment.

The Greens have said battling the climate crisis is their "red line" going into the talks.

The center-left SPD, however, could face a bumpier road when it comes to agreeing on a path forward with the FDP, particularly on economic policy.

The FDP have drawn their own boundaries, saying that tax raises are off the table.

What have the parties said?

Heading into the talks on Thursday, the SPD appeared secure and optimistic.

"I am going into the talks with great confidence," SPD co-leader Walter Borjans told reporters on Thursday morning.

His optimism was echoed by the party's general secretary, Lars Klingbeil.

"I'm not even thinking about [the talks] not working out," Klingbeil told public broadcaster ZDF.

Statements from the Greens focused more on the need for negotiations to be wrapped up quickly — and an openness from potential coalition partners.

"There needs to be mutual trust, that allows the partners to try things out," Greens co-head Robert Habeck told ZDF, adding that all involved would need to "shut up for a moment" and listen to the others.

The FDP, however, was more cautious — emphasizing that the door was still open for a coalition with the conservatives if the three-way talks with the SPD don't work out.

"For the FDP, it's clear that the content overlaps with the [CDU/CSU] union are the largest," party leader Christian Lindner told public broadcaster ARD on Wednesday evening. While the focus right now is on forming an alliance with the center-left SPD, a coalition under the conservatives "is still a viable option for us."

CDU's Laschet still wants coalition, but perhaps without him?

Meanwhile, later on Tuesday, the Christian Democrats caused a stir by calling an evening press conference, just a few minutes after CDU politicians had leaked quotes suggesting chancellor candidate Armin Laschet might be stepping aside.

Laschet stopped short of throwing in the towel, and said his party was still seeking a three-way coalition with the FDP and the Greens. However, he also made it clear that a CDU-led government with an alternative chancellor to himself was a possibility.

"It's not about Armin Laschet, the person," he said. "It's about the project for the country. And therefore, if one wants to reach different solutions, this is possible," he said in comments aimed at the two kingmaker parties. He said he had already made clear to the FDP and the Greens in their preliminary talks that he would be willing to make way if his candidacy was the deal-breaker. 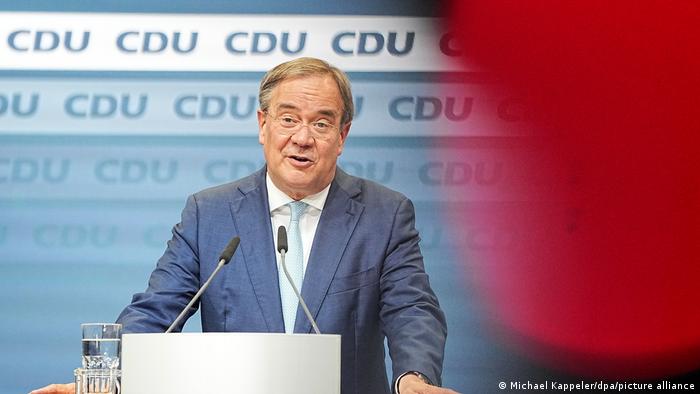 Armin Laschet held a last-minute press conference on Thursday, but only to indicate a willingness to step aside if that was desired, not to throw in the towel

Nevertheless, he added that for the moment, "The person to talk to [in coalition negotiations] at the CDU remains its chairman," referring to himself. "For this task I have the support of the party and the parliamentarians."

He did not specifically say that the CDU's Bavarian sister party, the CSU, still shared this desire to form a coalition. CSU figures have been arguably more critical of Laschet since the vote than his CDU colleagues.

Laschet said he would suggest a special party meeting on Monday to discuss potential personnel changes after the CDU's worst election performance since the second World War, saying that no role changes would be off the table.

A German government needs a 50% majority in parliament, but no one party can get so much voter support. So they agree on coalitions — and the next government will be no exception. Here is an overview of the options.