Party delegates have voted by a large majority to join formal negotiations with the Social Democrats and the neoliberal FDP to form the next government. 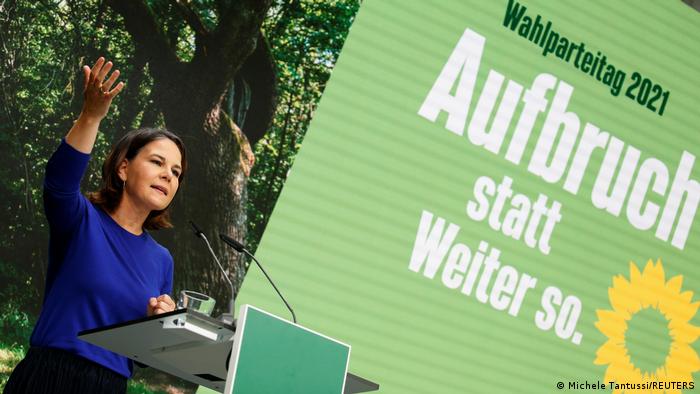 Germany's Green Party voted on Sunday to join formal talks to be part of the country's next ruling coalition government.

The climate-friendly party came third in Germany's election on September 26, but is a kingmaker in forming the next government.

On Friday, the leaders of the SPD, Greens and FDP wrapped up exploratory coalition talks and agreed to proceed further, subject to approval by each of the parties' senior officials.

An exploratory paper presented Friday described how the three parties were committed to climate protection to bring Germany toward the goals of the 2015 Paris climate accord.

In addition, Germany's phaseout of coal, currently envisaged by 2038 at the latest, should "ideally" be brought forward to 2030, said the paper.

While all three parties have already come out in favor of formal talks to form a coalition, Sunday's meeting saw Green Party delegates officially approve the move.

The Social Democrats formally approved the step on Friday, while the FDP leadership is set to do so on Monday.

The would-be alliance is described as the "traffic light" coalition — the colors of the three parties' logos.

The SPD is currently in a grand coalition with Chancellor Angela Merkel's conservative bloc, but has said it would prefer a new alliance with the Greens and FDP, rather than maintain the status quo.

Merkel decided not to run for chancellor again after 16 years in power.

Support for her center-right alliance dropped in the election after the party's candidate, Armin Laschet, failed to connect with voters.

It's the first time the three parties are meeting to discuss a possible coalition. While the Social Democrats are hopeful, there are still major hurdles to overcome before Angela Merkel's successor can be crowned.

SPD party leadership on Friday voted unanimously to go-ahead with formal coalition talks, the Greens and FDP are scheduled to hold similar party votes on Sunday and Monday respectively.

Foreign flags and even traffic lights are used to describe the various coalitions that emerge in German elections. Coalitions are common under Germany's proportional representation system.