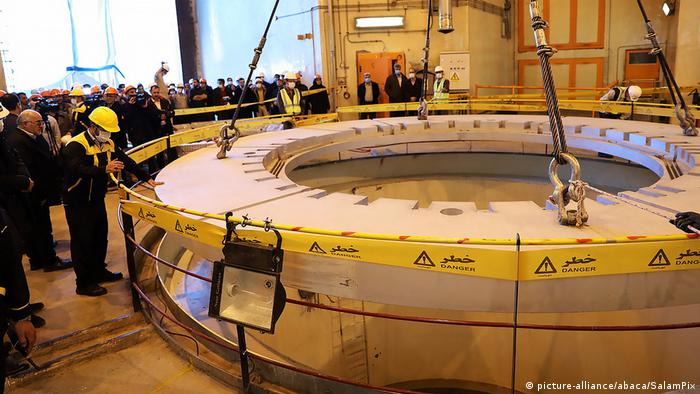 Germany, France and the United Kingdom on Saturday expressed "deep regret" at the United States' decision to end sanction relief that allowed companies to work with Iran on civil nuclear projects as part of a landmark 2015 nuclear pact.

The projects "serve the nonproliferation interests of all and provide the international community with assurances of the exclusively peaceful and safe nature of Iranian nuclear activities,'' the countries said in a statement.

The waivers were part of the landmark nuclear agreement signed in 2015 between Iran, the US, Germany, France, the UK, Russia and China and the European Union. The Joint Comprehensive Plan of Action (JCPOA), as it's known, sought to curb Iran's nuclear capabilities in return for lifting crippling economic sanctions.

European as well as Russian and Chinese companies were allowed to continue working on projects on Iran's civilian nuclear facilities without drawing US penalties. This included work on the Arak Modernization Project – converting a heavy water reactor in the major industrial city of Arak, in western Iran.

The projects were endorsed by the United Nations Security Council – the UN body charged with ensuring international peace and security.

However, US President Donald Trump pulled the country out of the JCPOA in 2018 and re-imposed US sanctions. Then, earlier this week US Secretary of State Mike Pompeo announced the decision to end three out of four remaining sanctions waivers for the nations still participating in the JCPOA.

The French, German and British foreign ministers as well as the EU said in the statement, they were consulting with partners to assess the consequences of this decision by the US.

Russia has also attacked the decision by Pompeo, with Moscow claiming US foreign policy was becoming "more dangerous and unpredictable."

Read more: Is Persian Gulf heading toward a new confrontation?

Why did Mike Pompeo end the waivers?

The US Secretary of State said Iran's continued nuclear escalation "makes clear" that cooperation between the remaining countries in the deal and Iran must end.

Tensions between the US and Iran eased briefly following the signing of the JCPOA, but in recent years there have been increasingly bad relations between the two countries. These include flare-ups over the Persian Gulf, and an Iranian rocket strike at an Iraqi military base housing US troops – in response to a US drone strike of a top Iranian military commander.