Is Persian Gulf heading toward a new confrontation?

Following a new incident in the Persian Gulf and the launch of a military satellite into space, tensions between Iran, the US and Israel are mounting. Could this lead to military conflict between these countries? 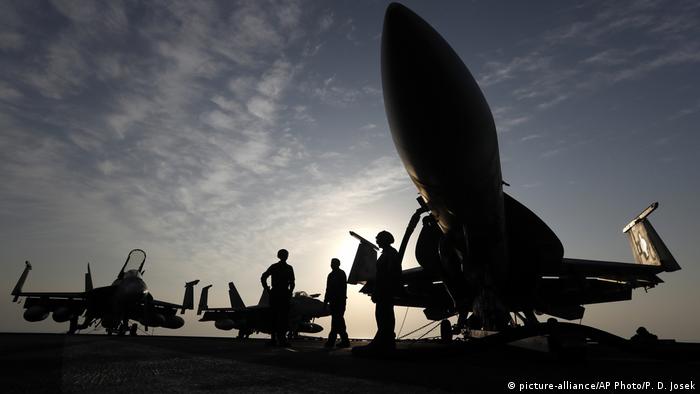 What started as muscle flexing in the Persian Gulf has turned into a symbolic demonstration of military power, as tensions between the US and Iran reached a new level this week. On Wednesday, state news agency IRNA declared that the Revolutionary Guard had launched the military satellite "Noor-1," into space.

The news of the satellite launch came just days after a confrontation in the Persian Gulf – which appears to be under the control of both sides. Last Wednesday, the US Navy declared that several boats belonging to the Iranian Revolutionary Guard Corps had repeatedly approached American warships in a "dangerous" and "provocative" manner.

US President Donald Trump tweeted that he had ordered the US Navy to destroy all Iranian warships if they approached the American ships again.

Tehran didn’t take long to respond. In his reply, Iranian Foreign Minister Javad Zarif advised Trump to take care of the coronavirus victims in his own country. The Persian Gulf is 7,000 miles (11,265 kilometers) away from the US; there is, however, no distance between Iran and the Persian Gulf, Zarif said.

'Iran is about to develop nuclear missiles'

US Secretary of State Mike Pompeo reacted promptly to the alleged launch of the Iranian satellite: With the launch, Iran had defied a UN Security Council resolution, he said.

"Every nation has an obligation to go to the United Nations and evaluate whether this missile launch was consistent with that Security Council resolution," said Pompeo, referring to UN Security Council Resolution 2231. "I do not believe that [the launch] is even remotely compatible with it, and I think Iran must be held accountable for what it did," he added.

According to the 2015 resolution, Iran is "called upon not to undertake any activity related to ballistic missiles designed to be capable of delivering nuclear weapons, including launches using such ballistic missile technology."

It is still under dispute whether the request is mandatory or not.

The Israeli Ministry of Defense also made a clear statement on the launch of the satellite. "Today's attempt to launch a satellite into space serves only as a front for Iran's ongoing development of advanced missile technology, with both ballistic intercontinental ballistic missiles (ICBMs) and (other) missiles capable of delivering a nuclear warhead."

'Security shock for the West'

The US and Iran are continuing their previous course of confrontation, which, despite a few skirmishes, has so far been mostly symbolic. The launch of the satellite this week was no coincidence. Iranian news agency Mehr announced that the launch took place on the birthday of the Revolutionary Guards.

The launch, in recognition of the start of the guards in April 1979, is a clear sign that Iran is not considering changing course anytime soon, even under the pressure of sanctions.

The launch of the satellite was not only a surprise to the West, but also a great achievement, Mehr wrote. "It is a big security shock to westerners and Americans, in particular when Iran is under tough US sanctions."

But Iran’s efforts to expand its space program are not new, political scientist Hamidreza Azizi, who works at the German Institute for International and Security Affairs, told DW. Iran has already made several attempts, some of which were unsuccessful.

"Therefore, the nature of the new satellite seems to be more important than the timing of its launch," Azizi said. "This is the first time that Iran has publicly stated that it wants to put a 'military' satellite into orbit."

That the entire operation was carried out by the Revolutionary Guards could be taken as a clear message to the United States and its allies, that the US’ actions have not succeeded in curtailing Iran’s military activities.

Since Trump’s cancellation of the nuclear agreement in 2018, Iran has been pursuing a growing policy of provocation, said Azizi. On one hand, this is reflected by the increased military activity in the entire region, especially in the Persian Gulf. On the other, it can be seen in the expansion of the missile, space and nuclear programs.

"The recent satellite launch was the latest, perhaps most important example of this development," he said.

To what extent the satellite launch brings a new and threatening quality to the Gulf confrontation is still unclear at this point. One thing is clear for the Jerusalem Post, however: "Iran is on steroids in its attempt to show off its military capabilities at sea, in the air and in space."

As for US policy, Azizi does not believe that Trump’s latest warning is the beginning of an open conflict with Iran. " Rather, it's a political position designed to show strength," he said.

Trump was criticized after his withdrawal from the nuclear deal, particularly by US Democrats, that his strategy had not contained Iran, but rather made it more aggressive. The maritime confrontation in the Gulf has now triggered a new wave of criticism of the US. But Trump was not seeking an open conflict, said Azizi. "He wants to show that his government will not remain inactive in the face of the so-called 'Iranian threat'."

Particularly in the time of the coronavirus pandemic, the US and Iran – which have both reported a high number of infections – should not be interested in a confrontation. The saber-rattling in the Gulf could push both governments to divert attention away from domestic issues. In both Tehran and Washington, the heads of state are under criticism, not least because of their handling of the coronavirus outbreak.

Iranian military forces have shown off their Naval Missile Facility on the coast of the Persian Gulf and boasted of their extended defensive capabilities.

Is Russia sabotaging the Iran nuclear deal over Ukraine sanctions? 09.03.2022

Despite progress in the negotiations to restore the 2015 Iran nuclear deal, the accord's future is at stake after a last-minute Russian demand for an exemption from Western sanctions.