Iran launches military satellite amid tensions with US

After months of failed attempts, Iran's Revolutionary Guard has claimed to have launched a military satellite into space. It marks the latest move amid the collapsing nuclear deal between Tehran and the US. 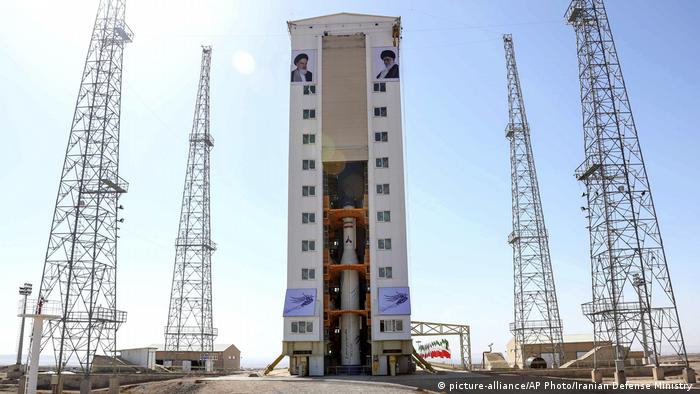 Iran's paramilitary Revolutionary Guard on Wednesday said it had successfully launched a military satellite into orbit after months of failed attempts, just a week after a tense encounter with US warships in the Persian Gulf.

"The first satellite of the Islamic Republic of Iran has been successfully launched into orbit by the Islamic Revolutionary Guard Corps," the Guards' Sepahnews website reported.

"This action will be a great success and a new development in the field of space for Islamic Iran," it added.

The Guard said the satellite had reached an orbit of 425 kilometers (264 miles) above the Earth's surface. The two-stage launch took place in Iran's Central Desert, it said, adding that it is the first military satellite Iran has ever launched.

The satellite was sent into orbit using a Ghased, or "Messenger," satellite carrier, the Guard said, an as-of-yet unheard of system.

The claim could not be immediately confirmed by independent sources and the Guard did not provide any verifying images or footage.

Success after months of failure

Iran has made several failed attempts to launch satellites in the last months, most recently in February with the failed launch of the Zafar 1 communications satellite. The country also experienced two failed launches in 2019, as well as a launchpad rocket explosion and a separate fire that killed three researchers at the Imam Khomeini Space Center, where Iran's civilian space program operates.

The launch is the latest development in escalating military tensions between Iran and the US. In recent years, the Middle Eastern power has broken all limitations agreed upon in a 2015 denuclearization agreement after US President Donald Trump withdrew his country from the deal in 2018 and reimposed sanctions on Iran. Iran continues to allow UN inspectors to visit its sites.

According to the US, such satellite launches go against a UN Security Council resolution that calls on — but does not require — Iran to refrain from activity related to ballistic missiles capable of launching nuclear weapons.

US and European powers fear that such satellite launches could help Iran develop its nuclear capabilities.

Iran is not currently thought to be capable of building a nuclear weapon small enough for a ballistic missile. But in the last decade the country succeeded advancing its space program, launching multiple satellites as well as a monkey into orbit.

Tehran has previously claimed it does not strive to develop its nuclear arsenal. The Revolutionary Guard launching its own satellite raising questions about that position.

It was not clear whether the country’s civilian government had been aware of plans for the launch. President Hassan Rouhani gave a 40-minute speech before his Cabinet on Wednesday without making any reference to it.

On Sunday, Iran's military confirmed it had experienced an encounter with US warships in the Persian Gulf last week. The Guard alleged without evidence that the US had started the incident. On Monday, the military group announced that it had significantly upgraded the range of its anti-warship missiles.