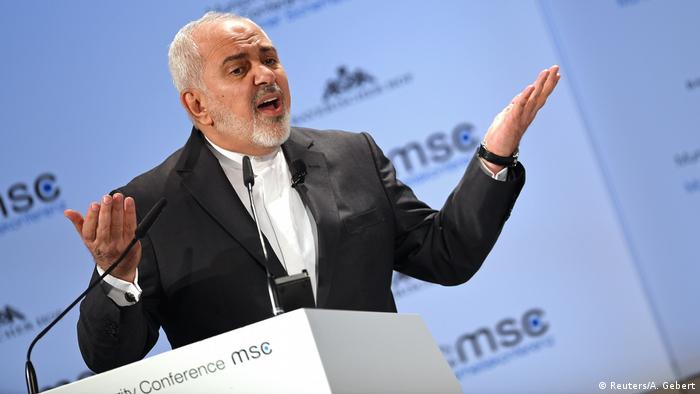 Iranian Foreign Minister Javad Zarif said there was room for maneuver in reimposing the 2015 agreement that kept Tehran from developing nuclear weapons. But he added it would only happen if Germany, France and the UK showed the same willingness to reinstate the deal's economic benefits for Iran.

The landmark agreement has been on life support ever since US President Donald Trump withdrew from it in 2018 and reimposed economic sanctions on Tehran, leaving Germany, France and the UK struggling to breathe life into the ailing deal.

Iran has responded to the US canceling the agreement with a series of steps back from its own commitments under the deal, including by increasing uranium enrichment.

However, Zarif offered the European trio, and the other members of the accord, China and Russia, an olive branch when he spoke to reporters at the Munich Security Conference.

"We have said that we are prepared to slow down or reverse these measures commensurate with what Europe does," he said at the annual meeting in Munich.

"We will decide whether what Europe does is sufficient to slow down or to reverse some steps — we have not even ruled out reversing some of the steps that we have taken," he added. "We're not talking about charity. We're talking about Iranian rights and the rights of the Iranian people to receive the economic benefits."

DW talks to John Kerry at the Munich Security Conference

The renewed US sanctions have almost entirely isolated Iran from the international financial system, driven away oil buyers and forced the Middle Eastern country into a severe recession.

"We have received irreversible harm or irreparable harm because of  US sanctions, but, nevertheless, we will reverse the steps that we have taken provided that Europe takes steps that are meaningful."

The EU, which is an actor within the framework of the nuclear agreement, has been trying to decrease tensions after Germany, France and the UK triggered a complaint mechanism under the terms of the deal in order to pressure Tehran into returning to full implementation.

The three countries have said Iran's breaches of the 2015 nuclear deal have made it "increasingly difficult" to reduce tensions in the Middle East. Top diplomats have warned they might take action against Tehran. (11.11.2019)