Social media shows a divided Iran after Trump withdraws US from nuclear deal | Middle East | News and analysis of events in the Arab world | DW | 09.05.2018

President Trump's decision to pull the US out of the nuclear agreement sparked heated debate among Iranians online. Some declared the move would #MakeIranGreatAgain, while others lamented potential effects on daily life. 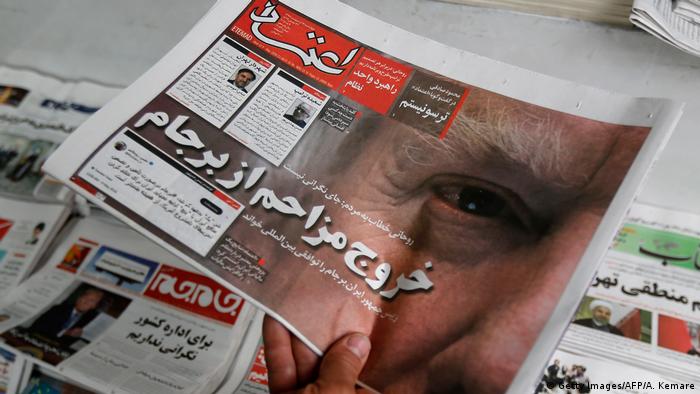 The major split of opinions among Iranians was clear even before US President Donald Trump's announcement the United States would pull out of the Iran nuclear deal. His decision caused a wave of discussion across all online platforms, most predominantly on Trump's favored means of communication, Twitter.

While one camp had wanted Trump to nix the deal and thus celebrated his decision, another remained deeply concerned about the consequences it could have on everyday life, from political instability to armed conflict or medicine shortages.

By Wednesday, the hashtag #ThankyouTrump was widespread among Iranian supporters of the US withdrawal from the Joint Comprehensive Plan of Action (JCPOA), the deal's official name. One Iranian Twitter user voiced his hope for a better Iran in the wake of Trump's announcement, saying: "It is possible that sanctions put ordinary people under pressure, but we are satisfied with it because it will have a positive outcome. It's like contractions while giving birth. You know the child that is being born will be a free and flourishing Iran."

Another user tweeted: "To me, every single word he said was true, real and full of hope for Iran's future. Thank you, Mr. President Trump.”

Some also used the hashtag #MakeIranGreatAgain to express their admiration for the US president and optimism for the future of their country. As one Iranian put it: "President Trump is the only leader in the world who stood with Iranian people. We finally take back our country from Islamist Mullahs and we make Iran great again with the closest friendship between Iran and the United States."

The hashtag #MakeIranGreatAgain had been used in the past by users in favor of regime change in Iran. The last time it circulated widely was during mass protests on the streets of cities throughout the country, as demonstrators sought to express their frustration with a stagnating economy and the excesses of the theocratic elite.

A look at many of the posts shows how quickly they turned into a debate among the different camps. Minutes after Trump announced his decision, a Twitter user called Elham wrote: "While the feeling of being hopeless grows in us, there is a group that is celebrating because our suffering will make them rich."

After someone pointed out that the situation will now be the same as it was years ago, Elham added: "During the time we were sanctioned many people got rich by circumventing [the sanctions] and money laundering."

The same user insisted that since the deal went into effect in 2015, smuggling and money laundering went on uninhibited. Elham then responded: "My knowledge goes as far as the oil contracts my company could sign after the deal was signed and things had indeed changed for better. Since the end of March the situation got worse again."

Attempts at reaching a mutual understanding between the two groups, however, seemed few and far between. Many users simply insulted the opposing camp, saying, for example: "If you are happy about the reinforcement of the sanctions, medicine shortages for the sick and misery for helpless people then know that you are a bastard."

Some also accused Trump of pretending not to know who will suffer most from the return of the sanctions.  According to Sadeghi on Facebook: "The most awful part of his speech was when he said, 'We stand with the Iranian people.' Cut the crap! The pressure of the sanctions will be directly on the shoulders of the Iranian people or do you really think it has an influence on the decision of the Islamic regime?!"

Others expressed pride in voting for Iranian President Hassan Rouhani, who had expressed his desire for the deal to remain in effect, and the place Iran has won for itself as a result of United States walking away from yet another international agreement. As Morteza put it on Instagram: "A whole year long we were maligned for voting for Rouhani. Now the world admires us for choosing reason over war."

Hossein Mehrzad expressed a similar sentiment on Twitter, "The vote for Rouhani was a vote for reason that shined last night in front of a lunatic called Trump."