German prosecutors have rejected a clemency request from former Nazi SS guard Oskar Gröning. Known as the "bookkeeper of Auschwitz," the 96-year-old has been convicted of being an accessory to murder in 300,000 cases. 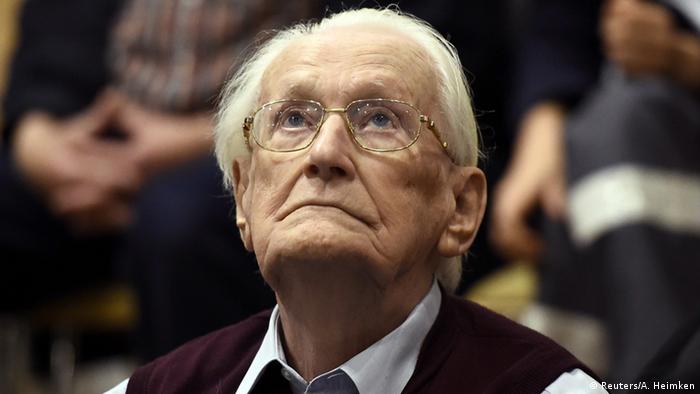 Oskar Gröning's bid to avoid a four-year prison sentence for his role as a guard at the Nazi concentration camp Auschwitz was rejected by German authorities on Wednesday.

"The clemency request has been denied," Wiebke Bethke, a spokeswoman for the prosecutors' office in Lüneburg told news agency epd. She did not provide further details.

Although his legal options are running thin, Gröning could still appeal his clemency request to the Justice Ministry of Lower Saxony, the northern state where Lüneburg is located.

Read more: Opinion — The Nazis' support staff are not without guilt

The 96-year-old was convicted of being an accessory to the murder of 300,000 people during his time as a guard and bookkeeper at Auschwitz and was sentenced to four years in prison.

At the end of December, Germany's Constitutional Court rejected Gröning's attempt to suspend his sentence due to health reasons. The court found no identifiable health risks and said that his prison sentence "carried a special weight."

Gröning voluntarily joined the Nazi's elite Waffen-SS at the age of 21 and was stationed at Auschwitz in 1942.

He was a bookkeeper who sorted and assessed money and valuables taken from prisoners before sending it back to his superiors in Berlin. During his trial in Lüneburg, Gröning said he felt "a moral guilt" for his work at Auschwitz, but said he had not personally been involved in mass murder.

Should Gröning decide not to appeal his clemency request, prosecutors in Hanover could soon summon him to begin serving his jail sentence.