Rising temperatures and droughts have made trees in Germany more vulnerable to attacks by bark beetles and other insects. That's led to a nearly sixfold jump in trees destroyed by pests over the past two years. 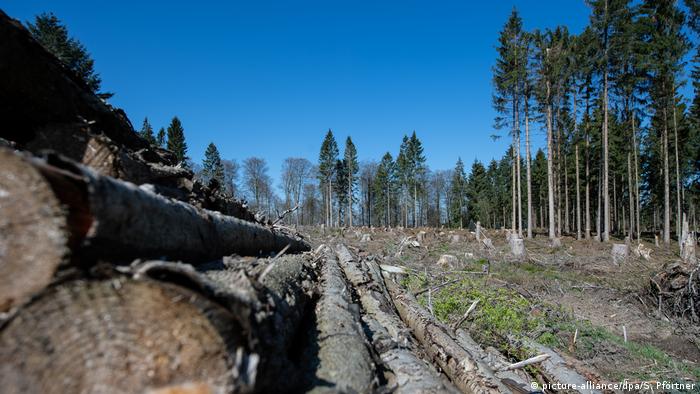 Around 32 million cubic meters (1,130 million cubic feet) of wood damaged by insects had to be removed from Germany's forests in 2019, the Federal Statistical Office reported Monday.

"In recent years, the native forests have suffered from drought and hot spells," the Wiesbaden-based statisticians said.

Beetle-infested trees have to be cut down to prevent the pest from spreading through entire forests.

The statistics office pointed out that more and more trees were also showing signs of drought stress, such as drooping leaves and thinning crowns. And then there are other threats such as storms, wildfires, snowfall and fungal infestations.

Last year, timber damaged by insects and other threats accounted for two-thirds of all felling in German forests, compared to 20% in 2010. Most of the species cut down — 83% — were conifers such as spruce, fir, pine and larch.

Experts have warned that climate change and the proliferation of insects like the bark beetle are having a catastrophic impact on native forests.

"This combination did not exist before," Michael Müller, forest protection expert at the Technical University of Dresden, said.

"We are currently experiencing the most serious forest damage … since the beginning of regulated sustainable forest care and management, so more than 200 years ago."

Two years ago, volunteer insectologists sounded the alarm — the number of flying insects had drastically fallen. Now a new study on three protected regions in Germany confirms these fears.

No coronavirus restrictions: Forests more popular than ever in Germany

April 24 marks Arbor Day: Joggers, hikers and people walking their dogs particularly enjoy forests. In the midst of the coronavirus crisis in Germany, the woods seem to be even more popular than usual.