Two years ago, volunteer insectologists sounded the alarm — the number of flying insects had drastically fallen. Now a new study on three protected regions in Germany confirms these fears. 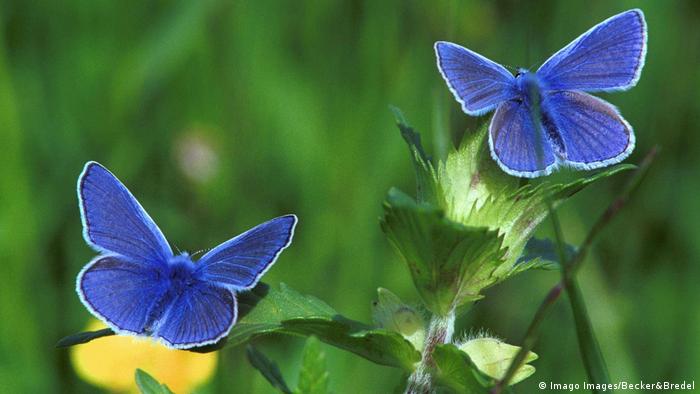 In October 2017, a long-term study by the Entomological Society Krefeld hit like a bomb: Within thirty years, the number of flying insects in Germany was said to have decreased by three quarters.

Now a research team led by Sebastian Seibold and Wolfgang Weisser, who teach terrestrial ecology at the Technical University of Munich, is confirming the reported decline. The biologists published their results on October 30 in the journal Nature.

"Previous studies have concentrated either exclusively on biomass, i.e. the total weight of all insects, or on individual species or groups of species," said Seibold, head of the research group, highlighting the special nature of his new research work. His group combined both approaches.

Between 2008 and 2017, the scientists regularly counted flying insects as well as other arthropods such as spiders and millipedes in three regions of the country. The study looked at 290 sites with forests and grasslands on the Swabian Alb in southern Germany, in Hainich - a wooded ridge in Thuringia - and in Schorfheide in the northern state of Brandenburg.

The scientists examined 150 sites in grasslands twice a year. They collected the animals from the grassland with nets. Of the 140 forest sites, 30 were examined each year, the remaining locations were investigated three times within a decade. The biologists caught the insects there with traps.

In total, the scientists analysed data from more than one million insects and other arthropods belonging to more than 2700 species. They also took fluctuations in the weather into account in order to exclude measurement errors as far as possible.

Decline by up to two thirds in ten years

Both on meadows and in forests, the number of species decreased by about one third during the study period. Their total mass also decreased, especially in grasslands, by 67 percent. In the forests it shrank by about 40 percent. According to the researchers, the decline is presumably related to agriculture. "We did not expect such a decline to be observed over only a decade," Weisser said. "This is frightening, but it fits into the picture that more and more studies are drawing.

In a commentary on the study biology professor William Kunin of the University of Leeds came to the conclusion that the verdict is clear and at least in Germany the insect shrinkage is real and as bad as previous studies sugggested. The study provides the strongest evidence of insect mortality available to date, he pointed out.

It has something to do with agriculture

The researchers were able to establish a connection with land use at the individual sites. This ranged from meadows where sheep grazed only a few days a year and which otherwise remained largely untouched, to heavily farmed areas which were fertilised and mown several times a year. Cattle grazed on some areas for about a third of the year.

They also divided the forests into three categories, from little to heavily farmed. Insect shrinkage was particularly pronounced on grasslands surrounded by arable land. There, the biomass of species that did not cover long distances shrank in particular. Possibly these insects would have worse chances if their habitat was surrounded by a lot of arable land.

In the forests, it was mainly species that were disappearing that travelled long distances. "We still have to find out whether more mobile species from the forest come into stronger contact with agriculture during their migration or whether the causes are also related to the living conditions in the forests," said Martin Gossner, another TUM researcher involved.

Bugs to the rescue -- antibiotic compounds from insects

Federal Environment Minister Svenja Schulze (SPD) expressed her alarm to the German Press Agency: The study once again demonstrates how serious the situation is, she acknowledged. "The way in which insects are used in agriculture plays a decisive role in determining whether they can survive in their environment," she said.

Author Seibold emphasised that it was not enough just to maintain individual areas and retreats to combat insect decline. "To stop the decline, we need [...] greater coordination and coordination at regional and national levels," he said.

"The study shows us that agriculture must be part of the solution," Joachim Rukwied, President of the Farmers' Association, argued. "Hardly any other sector is as dependent on the pollination performance of bees and insects as we are." He added that the Farmers' Association was backing "cooperative nature conservation." As an example he gave an initiative to give some arable areas back to nature: "This year we [voluntarily] created flower strips nationwide as a habitat for insects with a length of over 230,000 kilometres - a five-metre-wide strip that extends almost six times around the world."

Nature conservationists, however, are calling above all for a ban on insecticides - such as neonicotinoids, which France has already banned, or the herbicide glyphosate. Glyphosate has been criticized for harming biodiversity. Meanwhile, experts are debating whether such bans are really effective. There is also a danger that, after a ban, farmers will resort to other pesticides that are no less dangerous.

A matter of survival - On the Green Fence podcast (5/5)