They're found almost everywhere on earth, are eaten in some cultures and pitted against each other for sport in others. Some can even blast enemies with explosive chemicals. Welcome to the fascinating world of beetles. 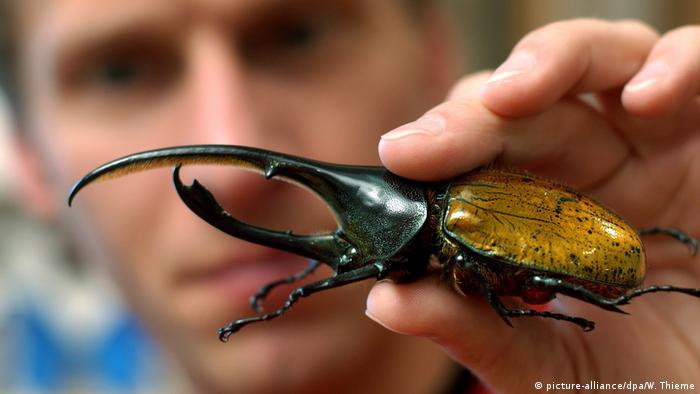 The particular vanity of humans leads us to believe that we hold dominion over the world. On that count, we are mistaken. Beetles are the real rulers of the planet.

With nearly 400,000 described species — and many more undescribed — found in almost every habitat, beetles are likely the most diverse group of animals on earth.

Their ascension to those heady heights is down to a number of factors, says Patrice Bouchard, an entomologist with Canada's agriculture and agri-food department and editor of The Book of Beetles: A Life-Size Guide to Six Hundred of Nature's Gems.

"Their success is pretty amazing," Bouchard told DW. "They are really hardy and they have a tough exoskeleton. Their wings are folded under their elytra."

This unique wing adaptation allows them to live in spots that would be tricky for other insects, like flies and wasps with exposed wings, explained Bouchard. Beetles can live in habitats ranging from rainforest to desert

Beetles can crawl through rocks, under bark, and inside fruit. They can live in freshwater, tropical environments, deserts and in extreme freezing temperatures. Beetle larvae and adults can also occupy different "microhabitats," so they don't have to compete for resources.

"This is what has enabled them to do well over time and survive many different changes in their environments," said Bouchard, who specializes in darkling beetles — which has more than 20,000 species and is one of the largest beetle families.

Indeed beetles as a group have many common traits that have contributed to their runaway success over hundreds of millions of years. But they become even more interesting when you look at individuals more closely.

Take the bombardier beetle — so named for its elaborate defense mechanism. It fires boiling hot chemicals from its bottom with a popping sound. The males of other beetle species have large mandibles or horns to fight off mating rivals for the best egg-laying spots.

In Japan, enthusiasts have turned this trait into a pastime and pit male rhinoceros beetles against one another in gladiator-like tournaments. The country's beetle buffs can even buy the popular pets from vending machines and in department stores — although, animal rights activists have spoken out against the practice. 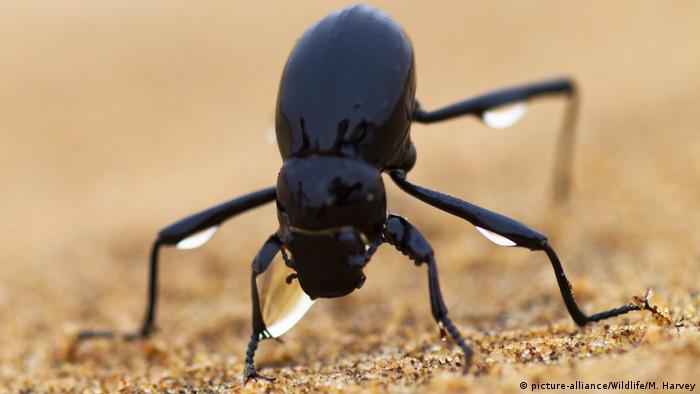 Scientists are now looking at certain beetle survival features that could help with challenges faced by humans — a research field known as biomimicry.

Who let the bugs out?

For many, insects are the stuff of nightmares. But these fascinating creatures are a vital part of our ecosystem. Without them the world would look entirely different. Find out more in our interactive graphic. (14.01.2016)

Agriculture is often viewed as the basis of human civilization. But there are some other — rather unlikely — farmers out there in the animal kingdom. (12.02.2018)

When Mother Nature conceived of the fig, she seems to have asked herself: 'Why go for the easy option?' The plant relies on an extremely complex — and somewhat macabre — pollination process to bear fruit. (28.02.2018)

This week, experts are meeting to discuss how we can avert an extinction crisis. But much of the planet's biodiversity isn't even known to science yet. Conservationists still struggle to find out what's really out there. (21.03.2018)

The fog-basking beetle is, perhaps, one of the ultimate survivors and of great interest to scientists working in this area.

The creature lives in the harsh Namib desert, where water is scarce. But fog-baskers have found a solution. When the moisture-laden Atlantic breeze rolls far inland, the beetles stand with their heads pointed down to allow water droplets that condensate on their bodies to trickle down to their mouths.

"We're looking at how they can use their body with structures on their exoskeleton and ridges," said Bouchard, "so we can replicate what we see in nature and then use that to our benefit."

The ubiquity of beetles means, we humans have come into contact with them a lot without even realizing it. Many act as decomposers, breaking down dead plant matter, dung and carrion that would otherwise be left to rot.

Their presence hasn't always worked out in our favor though. They can cause problems for farmers and foresters, for instance, by attacking crops and trees. 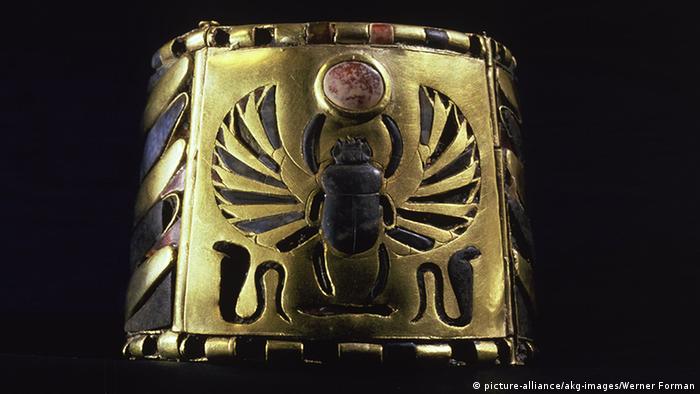 The ancient Egyptians revered scarab beetles, incorporating them into jewelry and other artefacts

Invasive species — those who are not native to a particular place — can also prove deadly for indigenous plants that have evolved no natural defenses against these new arrivals.

That's why countries like Canada, where Bouchard is based, are working to ensure non-native beetles aren't accidentally imported from abroad.

Still, carefully-planned introductions can be beneficial.

Bouchard and others at the agri-food department have been meticulously studying the potential of European weevils for keeping down populations of invasive weeds on Canadian rangelands without damaging other flora and fauna.

"In the past, you've had people trying to introduce different things in different places, not based on good studies and they have caused problems. So you have to do this kind of work really carefully," said Bouchard. 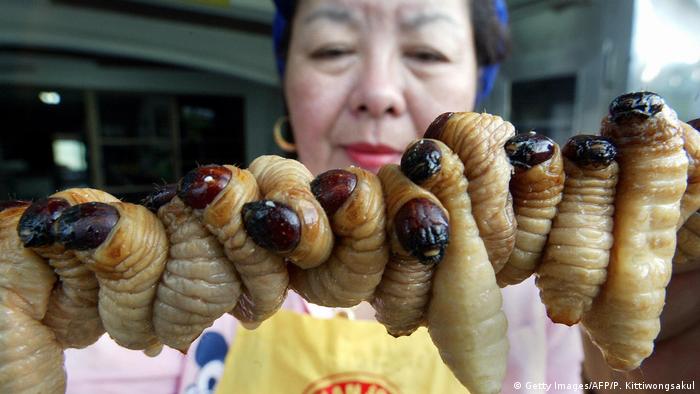 In places like Thailand, grubs are a typical dish

In many ancient and modern cultures, beetles have been held in high regard. The ancient Egyptians worshipped the scarab beetle, comparing its rolling of dung to the sun rolling across the sky each day. As a result, they became a symbol of everlasting life.

InAsia and Latin America, beetles and their larvae are a familiar food item. In Thailand, locals eat around 100 different species of beetle, while people in the highlands of Ecuador consume around 30 kinds of local beetles.

Nearly 800 million people are malnourished right now, according to the UN Food and Agriculture Organization. Bouchard and others believe insects, including beetles, could be part of the answer to future food crises if farmed sustainably on a large-scale. That might not sound appetizing for those who aren't used to eating bugs but grinding them into flour, for instance, could help people get over the ick-factor. 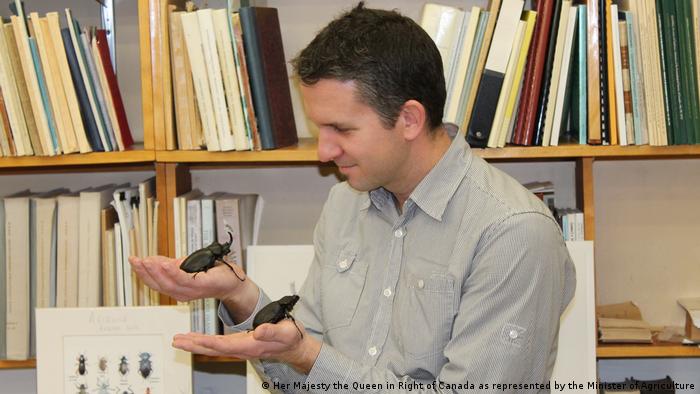 Patrice Bouchard (pictured) says beetles are difficult to study in their own environments, but that new technologies are helping

Bouchard believes we've still got a lot to learn about beetles. Some species have only ever been found once. Even those we know better are difficult to study in the wild because they tend to stay out of sight.

With climate change and habitat destruction threatening certain species, particularly the rare and flightless varieties that cannot migrate, it's more important than ever to continue to the search for previously undescribed varieties, says Bouchard.

"It's fun to find out about Elon Musk and explorations on other planets," said the beetle enthusiast. "But we still have a ton to learn about our own planet, places to explore and species to describe and things to understand about our own ecosystems and how to protect them."

'I didn't trick anyone': Natela Dzalamidze on swapping Russia for Georgia