Cafe Salomon is Leipzig's first kosher restaurant since the Holocaust. The Saxon city, where tens of thousands of Jews were persecuted in the 1930s, now has one of the most active Jewish communities in eastern Germany. 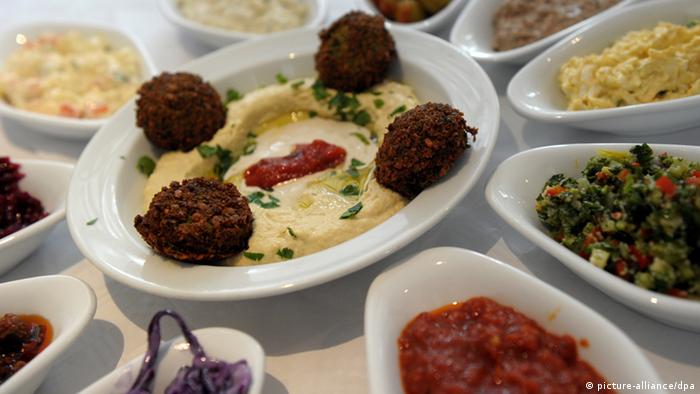 Hummus, fried fish and matzo ball soup: Those are some of the things you can find on the menu at Cafe Salomon, Leipzig's first kosher restaurant since World War II.

"We are trying to close a gap in Leipzig," Gotthard Dittrich, head of the Rahn school in Leipzig, told the Leipziger Volkszeitung (LVZ) newspaper at the restaurant's opening ceremony on Tuesday.

Cafe Salomon's owner, Jakob Kerzhner, told LVZ that previously kosher-abiding Jews could only have meals "at home." Most restaurants prepare meat, fish and dairy products in kitchens that do not meet the standards of kashruth, Judaism's dietary laws.

The restaurant does not serve fowl or beef, because, according to kashruth, milk and many meat products have to be prepared and served separately — too complicated and expensive a process for Cafe Salomon. However, some fish are on the menu, as well as vegetarian and vegan options.

"If we cooked meat in our kitchen, then we wouldn't be able to serve coffee with milk," said Kerzhner, who keeps kosher.

'A part of the living identity'

The idea for the restaurant came from the Rahn school's Dittrich and Gabriele Goldfuss, who is responsible for international collaboration in Leipzig. The school has a close partnership with a high school in Herzliya, a town just north of Tel Aviv in Israel.

"I hope that guests from all over the world come here," Goldfuss told LVZ. "I am proud that the Jewish community has become a part of the living identity of this city."

Leipzig had a large Jewish community early in the 20th century, but, like the rest of the European Jewish population, it was decimated in the Holocaust.

According to the IRG, a Jewish community organization in Leipzig, more than 15,000 Jews living in the city were persecuted as a result of the Nuremberg Laws, a set of anti-Semitic and racially discriminatory laws in Nazi Germany that came into effect in 1935.

Today, Leipzig has the most active Jewish community in Germany's eastern state of Saxony, with around 1,300 members.

Europe's largest menorah is once again aglow as Germany celebrates the start of the Jewish Festival of Lights. Noting Germany's dark history, President Steinmeier condemned the resurgence of anti-Semitic rhetoric. (02.12.2018)