A new synagogue has opened in Regensburg, Bavaria, 80 years after the original was destroyed during the Nazi-led pogrom of November 1938. The city's Catholic bishop has asked its Jewish community for forgiveness. 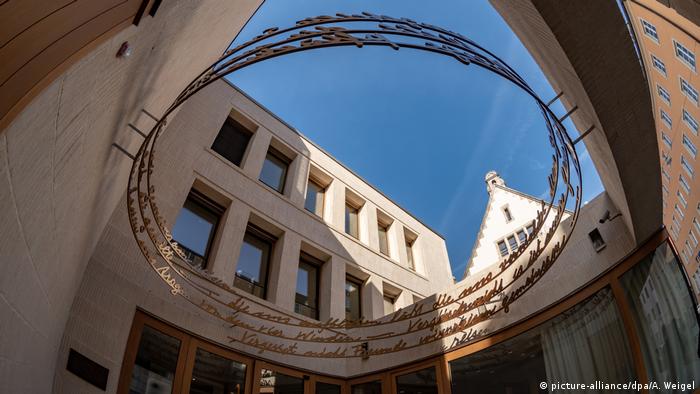 Three rabbis lifted Torah rolls into their safekeeping shrine inside Regensburg's new synagogue Wednesday, built on the site where the previous house of worship was destroyed in 1938 during then-Nazi Germany's November pogrom.

The new synagogue had risen "from the ashes," said Josef Chaim Bloch, rabbi to Regensburg's 1,000-member Jewish community, at Wednesday's opening that also marked 500 years exactly since a 16th century expulsion of hundreds of Jewish residents.

The previous synagogue, built in 1912, like its orthodox replacement for 160 worshippers — complete with an adjoining community center — stands close to the Catholic Dom cathedral in the historic Danube river city of Germany's southern state of Bavaria. 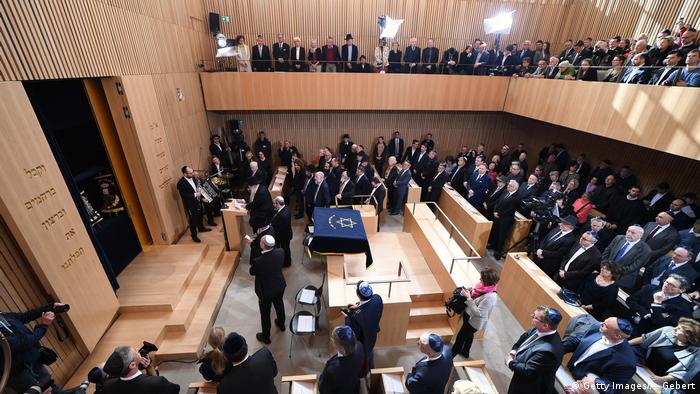 Officials gathered for a ceremony within Regensburg's new synagogue on Wednesday

Funding for the €9 million ($10.2 million) restoration, designed by the Berlin architecture bureau Volker Staab, came from the federal government, the state of Bavaria, Regensburg city, its Jewish community and numerous outside sponsors.

One of the founders of a city-wide support association, chairman Dieter Weber, said he and other Regensburg residents had felt obligated to support Jewish life and help fund the building of the new synagogue.

"It was about sending a signal in view of past history but also in view of increasingly strong anti-Semitism," Weber told BR Bavarian state broadcasting.

Regional Culture Minister Michael Piazolo, a Free Voters [Freie Wähler] party member within the recently elected Bavarian cabinet led by Premier Markus Söder and his conservative Christian Social Union (CSU), described the Regensburg opening as a "day of joy, not only for the Jewish community but for us all in Bavaria."

"It pains us that [Catholic] church representatives in 1519 did not position themselves protectively in front of [their] Jewish co-residents but instead in some cases even profited from their expulsion," said the bishop, adding that it was vital to stand together in confronting "anti-Semitic clichés."

Likewise in 1938, the overwhelming majority of Christians did not find the courage to show solidarity with their Jewish co-residents, said Voderholzer, referring to the Nazi-coordinated nationwide pogrom of November 1938 , sometimes given the misnomer "Kristallnacht," in which some 1,400 synagogues were destroyed nationwide and hundreds of Jews were murdered. 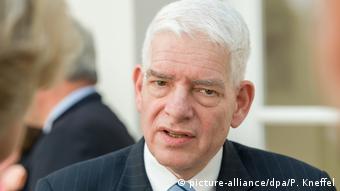 Josef Schuster, president of the Central Council of Jews in Germany, said the new synagogue restored a "centerpiece" for Regensburg's Jewish community, coinciding with a feeling of starting afresh among its younger members.

Jewish life in Regensburg had a future, Schuster said, despite what he termed rampant anti-Semitism espoused by resurgent far-right populists across Germany.

Jewish life in Regensburg goes back more than 1,000 years, making it the oldest Jewish community in Bavaria. The earliest written record of the community's origins dates back to 981.

Holocaust survivor Ernst Grube told the Protestant news agency epd during Wednesday's festivities that he hoped that Regensburg's synagogue "will be always so full as it is today."

Opinion: The Nazi pogroms: They just looked on

Eighty years after the Kristallnacht pogrom, every German can ask: How did my family react at the time? DW's Felix Steiner takes a personal look at how his family experienced the Night of Broken Glass. (09.11.2018)

80 years ago: the Nazi 'Night of Broken Glass' pogrom

Eight decades ago, on November 9-10, 1938, Nazi Germany launched an anti-Jewish pogrom of medieval proportions. The "Night of Broken Glass," or "Kristallnacht," has gone down in history as an example of Nazi barbarism. (09.11.2018)

The museum is closed to the public, but the spy agency revealed some declassified artifacts in time for the agency's 75th anniversary.

Canadian Prime Minister Justin Trudeau spoke of "significant damage" in eastern Canada as he ordered the military to help with clean-up operations.